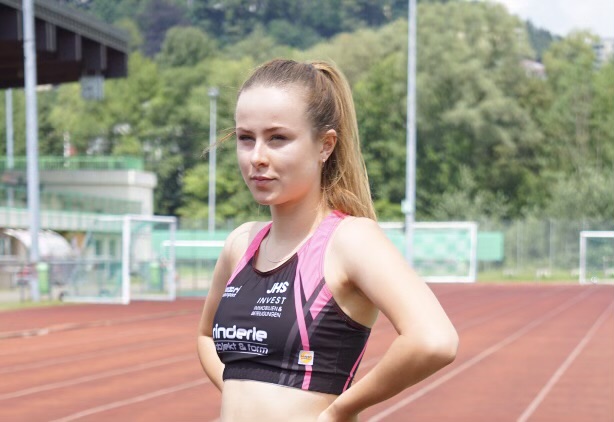 Jana Schmid is a student during the week, but things look very different on the weekend. On Saturday, she will put on her green and gold cross-country uniform, lace up her shoes and be ready to run 5,000 meters. Although Schmid likes to run with the team, American Cross Country is still new to her. However, her work ethic and production for the team were better than that of a typical newcomer.

A few months ago Schmid von Immenstadt, Germany, moved to the USA. Although she moved to the United States from another country, the decision to move to Point Park was an easy one for her.

“I planned it because I wanted to study in the USA to improve my English and I was looking at an organization to go to a university,” said Schmid. “Then I found Point Park, and I really liked that it was a university in town.”

Schmid studies international business administration. She said that she loves that Point Park offers her internship opportunities and outside of school activities like sporting events. The location is perfect for her and she enjoys the atmosphere of the city.

Schmid’s second reason for choosing Point Park was the opportunities for cross country and athletics.

“I also spoke to Coach Tim [Creamer] and I liked him very much and he made me feel very welcome, ”said Schmid. “I also spoke to Alyssa [Campbell] and it was pretty nice so I decided to come here. “

Schmid made the decision and moved from Germany to Pittsburgh, Pennsylvania. The transition for them went smoothly. Even so, it was difficult for her at first, as English was her second language. Nevertheless, she is getting used to the language and her team is helping. Schmid’s time with the team on and off the cross-country skiing course helped her with the language and got her used to America.

Schmid wanted to run for Cross Country at Point Park and is already a constant top runner for the team in her first year. However, long distance running was not always her main focus.

Prior to her senior year in high school, she didn’t focus on long distance running like cross country and the 5 km distance for women cross country. Schmid’s focus in training was on high jump, long jump and other disciplines. However, when the COVID-19 lockdown occurred in Germany, Schmid began to run alone.

“In Germany all things were closed because we had a very hard lockdown and then I really started running on my own because it was the only way to keep you fit because everything else was closed,” said Schmid. “I ran alone most of the time, but then I came here and you have so many running partners here. It’s so nice to run with the team, that’s why I like it here more. “

Schmid began to run more and more distance, but adapting to American cross country was something different for her. In Germany she only trained twice a week, but with very high intensity. Meanwhile, the team in Pittsburgh trains six times a week with less intensity. In addition, they cover longer distances during training, which they had to get used to. Although Schmid has never run the 5 km before, Schmid was 9th of all runners and second for the team behind Senior Alyssa Campbell, which means that the team took second place at the Bethany Invitational.

Schmid was successful in her first race, but a leg injury would mean she was out of the Lock Haven Open and Carnegie Mellon Invitational. Schmid and team captain Campbell believe the switch to walking on the sidewalk contributed to the injury. In Germany Schmid walked on forest paths and grass, but in the city she walks on the sidewalk. The adjustment was a change for them, but Schmid adjusted.

Schmid returned to the NAIA Great Lakes Challenge in Grand Rapids, Michigan, practicing cross-training, in which a runner cycles and runs because of a leg injury. Despite an injury, Schmid was 18th of all runners and second for the Pioneers, which helped the team to first place. This was the team’s first place since the Midwest XC Challenge in 2020.

Schmid made an impressive return with his first place finish in Michigan. However, cycling was tough for her as she couldn’t run with her teammates during the race.

“It was always difficult because you see all your teammates running and you say, ‘Okay, I can run.’ And they also come together as a team, and [then] You’re the person who goes cycling separately … but I’m looking forward to running, ”said Schmid. “That was the motivation for cycling … because I know it makes me better. It’s good for me to relax and I know that I will be able to keep up with my teammates again when I get back. “

At the last time the newbie runner met that year, she finished sixth of all runners in the River States Conference (RSC) championship and second for the team. Even so, the team missed second place and only missed first place by 3 points.

Although Schmid and Campbell couldn’t go to the Nationals as a team, they both qualified for the Nationals in Vancouver, Washington. For Campbell, she finished first of all runners in the RSC Championship and this is her third time qualifying for the Nationals. Campbell said she was extremely proud of the team and Schmid. Campbell also noted that she was impressed by Schmid’s optimism and passion for running, despite being injured.

“She’s naturally optimistic and that’s just amazing to me,” said Campbell. “She’s so cute and so nice, but she’s one of the toughest runners out there. She says, ‘I’ll just do it.’ It’s very easy for them, and for them it’s like I’m just running – why should it be any different? “

Schmid and Campbell are both looking forward to the Nationals. While Campbell was already at this stage, if a runner is in the top 30, she wants to become an All-American runner.

“I think she could really do it and for me I’m going there to have the experience of being with the Nationals and I’ll do my best to just do my best,” said Schmid. “I think I go there mainly to gain experience and see how Alyssa is doing and to use it as an example for the next few years.”

No matter how Schmid fares at the Nationals, that’s just the beginning for her. Schmid is just a newcomer and is being prepared for her first full season of athletics in America. She said she was excited to be perfectly healthy and couldn’t wait to keep running for the team.

Her work ethic and passion for running are evident to the team, and they all feed on their energy and optimism.

“I think that attitude that she has helps her,” said Campbell. “Since she is already our number two and is on the right track, I have no doubt that even after I leave, she will be a wonderful leader in the team and will only get better.”

Campbell compared Schmid to herself when she qualified for the Nationals as a freshman, and she said she believed Schmid could outperform her. She believes that Schmid can be as good, if not better, than herself, especially when she is perfectly healthy.

“She’s going to do this a lot and this is going to be her first experience and she really wants to take it up,” said Campbell. “She just wants to go out and do the best she can with her injury and then take some time off after that to really recover for the track.”

Schmid was ready to travel to the Nationals with Campbell. She thanks the team for the reception. For Schmid, she sees them more as teammates. These are her friends. She was traveling the country and the team was there for her.

Although the team did not qualify for the NAIA National Championship, they will all cheer for Campbell and Schmid. Schmid remains optimistic and can hardly wait for the next few years in cross country and athletics.

“I believe that our cross-country team really wants to and can go to the national championships next year because we all want to go to Florida,” said Schmid. “That’s our big goal for next year and I think if we practice a little more we can do it next year.”

Schmid went on as she believes the team will do in the track and field season.

“I think we’re in pretty good shape,” said Schmid. “We were so close [to making it to Nationals as a team], but it just shows us that with a little more effort we are pretty well equipped for the track season. “

Schmid is grateful for the chance at the Nationals. Not only can she go to Vancouver and race, but she can also travel with Campbell, who has helped her all year. However, the whole team helped each other and had another great cross-country season. Schmid is prepared for the Nationals and can’t wait to run with Campbell.

“We all did our best and we were so close but we didn’t make it. It was nice too, because now I can go to the Nationals with Alyssa and I’m really looking forward to it, ”she said.