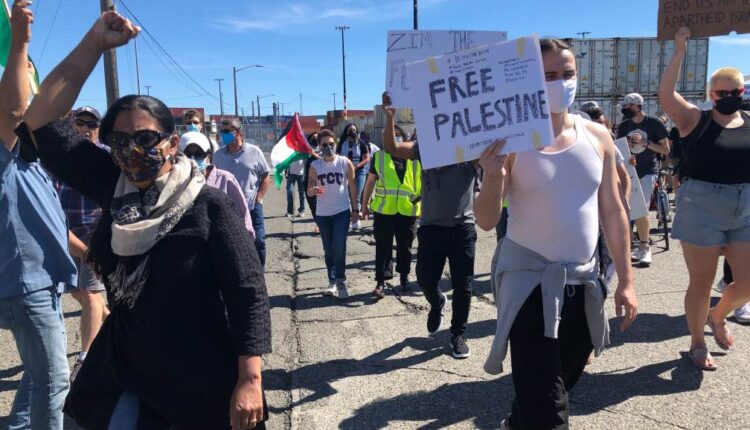 It took police crackdowns to unload the Israel-operated ZIM San Diego ship in the port of Seattle.

For weeks, pro-Palestinian block-the-boat protesters had prevented the ship from unloading its cargo in the port. The group recently won a victory in Oakland when another ZIM ship, the Volans, had to leave without unloading. ZIM is Israel’s largest shipping company and one of the largest in the world, and the protests against them are part of the Boycott, Divestiture and Sanctions Movement (BDS).

Block-the-boat actions, led by the Arab Resource and Organizing Center (AROC), focus on the “boycott” part of BDS. The participants do not do this through consumer decisions, but in coalition with workers who can boycott Israel by refusing to unload goods transported by Israeli ships. These actions are in response to appeals by Palestinian unions to their comrades in the US labor movement to boycott the Israeli occupation by “courageously taking a stand against the occupation and standing by us when we demand freedom, justice and human dignity”.

The ZIM San Diego was originally scheduled to dock in the port of Seattle on June 2, but the heat from organizations like AROC and Falastiniyat, a Palestinian feminist collective that organized the picket lines in Seattle, kept the ship in Elliott Bay for almost two weeks.

On Saturday, June 12, the ship tried to unload its cargo. Protesters went on a community strike early in the morning and the 19 local International Longshore and Warehouse Union (ILWU) members tasked with unloading the ship refused to cross the border. The pickets continued throughout the week. It wasn’t long before Edward DeNike, President of SSA Marine Corporation, who operates the terminal where the ZIM San Diego was docked, urged the ship to leave port.

But the situation suddenly changed on Thursday, June 17, when the picket was in operation – and socialist councilor Kshama Sawant was on the line – the Seattle Police Department stepped in and asked protesters to disband. Eleven people have been arrested – all of them have since been released.

According to AROC, the ship was finally unloaded on Thursday night after the picket lines were broken up by the police.

“In order for the ZIM San Diego to be unloaded, the police had to take tough action,” says Wassim Hage, AROC press coordinator. “This moment when the police crack down on pro-Palestinian protesters in Seattle is deeply connected to the Israeli mob and police ethnically cleansing Palestinians in East Jerusalem and the Israelis breaking the ceasefire in Gaza.”

In an email template written by AROC for supporters to use when contacting Seattle Mayor Jenny Durkan to urge her not to interfere in the blockade, AROC claims the Israeli Consulate General is putting pressure on officials as Mayor Durkan and DeNike from SSA Marine have unloaded the ship. If this allegation is proven, Israel would pressurize a US mayor and a US company to use a police force trained by the Israeli military against people who are exercising their rights, all in the interests of the smooth running of Israeli trade.

“ZIM is clearly desperate. No workers crossed our picket lines and ZIM was unwilling to leave after SSA Marine Corporation asked ZIM San Diego to leave, “said Aisha Mansour of Falastiniyat in a statement on Thursday’s arrests. “It is telling that this company would rely on police violence to suppress a peaceful vigil protesting Israeli apartheid. These actions are clear attempts to intimidate our community, which advocates human rights in Palestine and everywhere. We will never stop fighting Israeli apartheid from Seattle to Jerusalem. “

Block-the-boat actions have taken place across the country, and workers in South Africa and Italy have also refused to handle Israeli cargo. In the United States, ILWU collaboration is key to this effort. The union has a history of militancy, but these recent actions differ in important ways. When the ILWU refused to handle South African cargo during the apartheid era, dock workers and non-community organizations initiated the picket – and they paid a price for it in injunctions and lost wages. Today, with the labor movement on the defensive like never before, even the ILWU does not have this level of militancy. This may explain why, while Local 19 stated that it supports Block the Boat’s first amendment to “assemble peacefully and nonviolently” at the Seattle Terminal, some members were working on the ship after the police broke the picket line .

Despite the arrests and the at least partial unloading of the ship, the organizations involved in the Block the Boat actions have described the five-day picket as a success.

“From Oakland to Seattle, we’ve shown that workers and social justice movements support the Palestinian struggle for freedom and that there will be a heavy price to pay for all companies doing business that benefit the apartheid state of Israel,” said Lara Kiswani, executive director of AROC. “We won’t give up.”

The Mayor of Spokane has unveiled a plan to replace shelter beds, but is it in line with city law?