How Rural Communities Are Losing Their Pharmacies 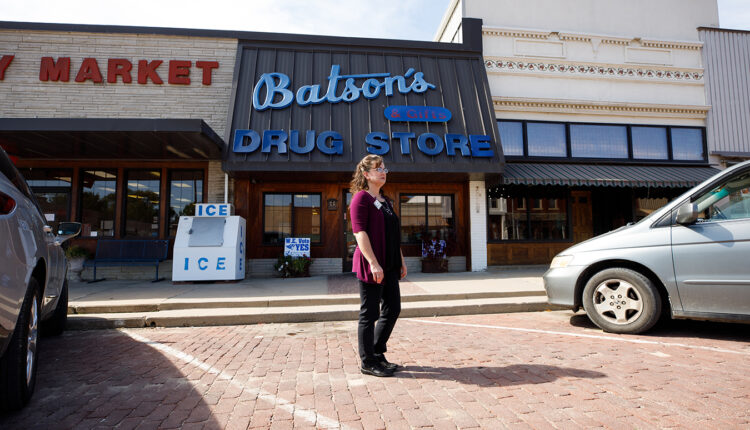 Batson’s Drug Store seems like a throwback to a simpler time. The independently owned pharmacy in Howard, Kansas, still runs an old-fashioned soda counter and hand-dips ice cream. But the drugstore, the only one in the entire county, teeters on the edge between nostalgia and extinction.

Julie Perkins, pharmacist and owner of Batson’s, graduated from the local high school and returned after pharmacy school to buy the drugstore more than two decades ago. She and her husband bought the grocery store next door in 2006 to help diversify revenue and put the pharmacy on firmer footing.

But with the pandemic exacerbating the competitive pressures from large retail chains, which can operate at lower prices, and from pharmaceutical intermediaries, which can impose high fees retroactively, Perkins wonders how long her business can remain viable.

She worries about what will happen to her customers if she can’t keep the pharmacy running. Elk County, with a population of 2,500, has no hospital and only a couple of doctors, so residents must travel more than an hour to Wichita for anything beyond primary care.

“That’s why I hang on,” Perkins said. “These people have relied on the store from way before I was even here.”

Corner pharmacies, once widespread in large cities and rural hamlets alike, are disappearing from many areas of the country, leaving an estimated 41 million Americans in what are known as drugstore deserts, without easy access to pharmacies. An analysis by GoodRx, an online drug price comparison tool, found that 12% of Americans have to drive more than 15 minutes to reach the closest pharmacy or don’t have enough pharmacies nearby to meet demand. That includes majorities of people in more than 40% of counties.

From 2003 to 2018, 1,231 of the nation’s 7,624 independent rural pharmacies closed, according to the University of Iowa’s Rural Policy Research Institute, leaving 630 communities with no independent or chain retail drugstore.

Independent pharmacies are struggling due to the vertical integration among drugstore chains, insurance companies and pharmaceutical benefit managers, which gives those companies market power that community drugstores can’t match.

Insurers also have ratcheted down what they will pay for prescription drugs, squeezing margins to levels that pharmacists call unsustainable. As the insurers’ drug plans steered patients to their affiliated drugstores, independent shops watched their customers drift away. They find themselves at the mercy of pharmaceutical intermediaries, which claw back pharmacy revenue through retroactive fees and aggressive audits, leaving local pharmacists unsure if they’ll end the year in the black.

That has a direct impact on customers, particularly older ones, who face higher copays for prescription medications if they have a drug plan, and higher list prices if they don’t. If their local pharmacy can’t survive, they may be forced to travel long distances to the nearest drugstore or endure waits to get their prescriptions from understaffed pharmacies serving more and more patients.

“Living in an area with low pharmacy density could increase wait times, decrease supply, and make it harder to shop around for prescription medications,” said Tori Marsh, GoodRx’s lead researcher on the drugstore desert study.

Independent pharmacies saw their margins shrink. On average, a pharmacy’s cost of dispensing a single prescription, factoring in labor, rent, utilities and other overhead, ranges from $9 to $15. But the reimbursement is often far less.

Multiple pharmacists said that about half of drug plan reimbursements fail to cover the costs of drugs and their overhead.

“What you’re left with is that 50% of claims that you can make some money on, and really, the tiny percentage of claims where you make an extremely high amount of money,” said Nate Hux, who owns an independent pharmacy in Pickerington, Ohio.

It’s that tiny sliver of wildly overpaid drugs, especially generics, that determines whether a pharmacy can survive. A generic drug that costs $4 might get reimbursed by a drug plan at $4,000.

Some pharmacies increase their list prices to ensure they capture the highest reimbursements that drug plans are willing to pay. But that raises prices for patients paying cash.

Jolley, who also works as a consultant for pharmacies across the country, said some pharmacists game the system by billing excessive charges for drugs they mix on-site or calling physicians to switch patients to more profitable drugs.

“Pharmacies that play this game get exceptionally wealthy,” he said. “Most pharmacies either don’t feel comfortable playing this game or aren’t aware that that’s how the system works, so they get left behind. That’s why you see all these pharmacies closing.”

Pharmacy benefit managers, brokers known as PBMs, also steer customers away from independent pharmacies to affiliated chain, mail-order or specialty pharmacies with lower out-of-pockets costs. Some PBMs prevent local pharmacies from offering the most expensive drugs at all.

The benefit managers counter that there are more independent pharmacies today than there were 10 years ago. An analysis conducted on behalf of the Pharmaceutical Care Management Association, a trade group that represents pharmacy benefit managers, showed a 13% increase in the number of independently owned pharmacies from 2010 to 2019. However, many of those new stores opened in communities that already had pharmacies.

“PBMs are not seeking to put independent pharmacies out of business,” said Greg Lopes, a spokesperson for the trade group. “PBMs are trying and often succeeding in lowering drug costs.”

Katie Koziara, a spokesperson for the Pharmaceutical Research and Manufacturers of America, an industry group representing drugmakers, said the large market power of PBMs can leave patients with fewer choices.

“The system might work well for health plans and these middlemen, but it creates difficult access barriers for vulnerable patients,” Koziara said. “We’re concerned about the emerging issue of ‘pharmacy deserts’ where patients, particularly among communities of color, cannot readily access a community pharmacy for their medications.”

Independent pharmacists routinely identify those middle-manager companies as the leading cause of their troubles. At Batson’s drugstore in rural Kansas, Perkins recently had a customer who had been taking Emgality, an injectable monoclonal antibody treatment for migraines made by Eli Lilly and Co., that typically retails for up to $760 a month. But the customer’s drug plan wouldn’t pay Batson’s to fill it, forcing her to wait until it could be mailed from a specialty pharmacy.

Frustratingly, Perkins said, patients who get pushed to order drugs by mail often bring them to her when they need help deciphering how to use them.

Even when pharmacies make money on a prescription, there’s no guarantee they can keep much of the profit. Drug plans charge pharmacies fees every time they need to interact with the PBM’s claims database. While those fees average only 10 to 15 cents per transaction, a busy pharmacy might need to check the database hundreds of times a day.

PBMs also have implemented retroactive fees based on performance metrics they set. Pharmacies can wind up losing money on a prescription filled months earlier. PBMs describe these as quality measures, but pharmacists complain they are more about sales volume. Many of the metrics track how diligently patients take their medication, which pharmacies can hardly control.

One PBM’s contract, obtained by Axios, showed only 1% of pharmacies are able to avoid retroactive fees.

Jeff Olson, who owns three rural pharmacies in Iowa, said he paid $52,000 in retroactive fees on revenue of $6 million in 2015. While his annual revenue remained flat through 2020, those retroactive fees last year totaled $225,000.

Moreover, Olson said, he doesn’t know what metrics insurance plans use to evaluate his performance and calculate the fees.

“They define quality themselves,” said Ronna Hauser, vice president of pharmacy affairs for the National Community Pharmacists Association. “If you have 20 Part D plans you contract with, that’s 20 different quality programs that you’re supposed to be aware of and keep up with.”

According to the Centers for Medicare and Medicaid Services, such retroactive fees were 915 times as high in 2019 as in 2010. The resulting higher prices mean Medicare beneficiaries burn through their initial coverage period faster and enter a coverage gap, or “doughnut hole,” sooner.

At Olson’s pharmacy in St. Charles, Iowa, a town of fewer than 1,000 people, fees and other financial pressures forced Olson to scale back and operate the store as a telepharmacy. Technicians fill prescriptions under the eye of an off-site pharmacist, and customers see a pharmacist only one day a week.

For a town with no other health care provider, that means six days when no one can provide vaccinations or test for strep throat.

Back in Howard, Debbie Lane, 70, likes the personal service Perkins offers at Batson’s.

“It’s a lot easier to go down to a local store, and if it happens to be after hours or an emergency, she’ll open up for us,” Lane said.

Perkins will tell her if Lane can save money by driving to a chain drugstore in Wichita instead. And, recently, Perkins ran the numbers to help Lane decide which Medicare plan would be the least expensive given the medications she takes. Lane knows it’s a struggle to keep a small-town pharmacy open and fears what might happen if Batson’s closed.

“It’d be devastating,” Lane said. “There are a lot of us like me, who will sometimes pay a little extra to make sure that Julie stays in business.”

Post-Pandemic, What’s a Phone Call From Your Physician Worth?

From ‘Physician Assistant’ to Medicare, Readers and Tweeters Mince No Words