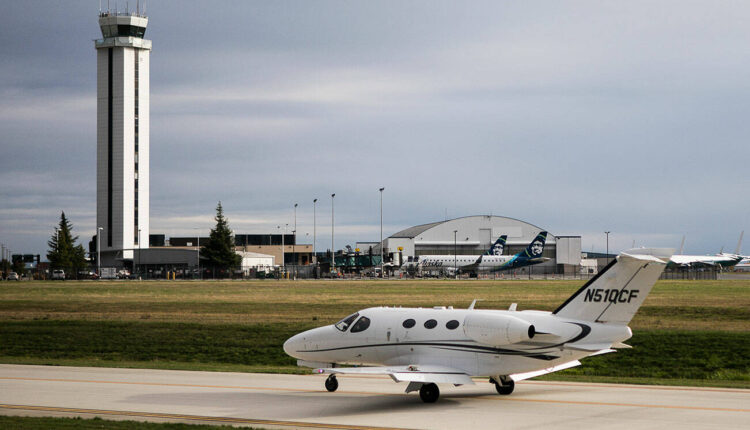 EVERETT – By 2040, demand for commercial air travel in Paine Field could quadruple, according to a new forecast.

Annual passenger numbers could soar to 4.3 million in the next two decades, compared to about 1 million in 2019, according to a report commissioned by Snohomish County to come up with a new long-term plan for the airport.

The Paine Field passenger terminal, owned by Snohomish County, would have to open four more gates to meet that demand, said Michael Tubridy, vice president of master planning at Landrum & Brown, the aviation consultancy that made the forecast.

Built and operated by the private company Propeller Airports, the terminal opened in 2019 with two jet bridges and a third gate that allows passengers to board planes from the sidewalk.

Now the county will consider making land available to enlarge it.

“As traffic continues to grow, some of the existing facilities need to be expanded or improved,” Tubridy said at a virtual public meeting on Wednesday.

Outside the new FedEx facility in Paine Field. (Olivia Vanni / The Herald)

The forecast comes as local and state executives examine options to meet future air travel demand in the Puget Sound area, and Seattle-Tacoma International Airport continues to expand. The number of passengers is expected to exceed the region’s capacity in the next decade as demand for flights picks up again from the pandemic.

Washington officials are already monitoring Paine Field to meet the need. That year, Everett Airport was shortlisted by a state commission to be good candidates for expansion over the next 20 years.

With the airport master plan, the district will examine what is physically and financially possible and – with the involvement of the public – outline the best route for the future.

Any planned expansion of the terminal is likely to attract intense scrutiny from neighboring communities that have fought against passenger traffic for years and ultimately lost in court.

Propeller CEO Brett Smith said he was now focused on getting through the pandemic and recovering – not expanding.

“We look forward to working with the county and everyone involved as we go through the master plan process,” he said in an interview with The Daily Herald on Friday.

The county will also have to weigh up other increasing demands on the airport, including the need for more facilities for general aviation and air freight operations, the forecast shows.

“I see it like a big puzzle. And how do we fit that together? “This is what the master plan process is for.”

According to an inventory drawn up for the master plan, there is already a need for more hangar space at the airport in order to serve companies and people who lease seats for their aircraft. More than 230 potential tenants are on a waiting list for the district’s own space, including almost 300 hangars and 55 storage units. Most of these people can expect to wait more than two years for an opening, according to the inventory.

The airport is known as the home of the Boeing Co.’s Everett plant. The airfield is also home to more than 60 other companies, including Aviation Technical Services, which specialize in commercial aircraft repair and renovation. FedEx Express recently commenced cargo operations at the airport after Boeing acquired the Dreamlifter Operations Center, which was previously used to transport Model 787s. There are also flight schools, museums, educational institutions and authorities.

While most of the approximately 1,300 hectare airport is occupied, around 120 hectares on the west side are undeveloped.

In the next phase of the master plan process, the consultant will work with the airport on options for how the airport could change in the future. These proposals will be released for public comment next year. Once a preferred option has been selected, the county examines the environmental impact and financial viability.

The county has established three main committees to direct the development of the plan. A steering committee consists of district directors, business leaders and the executive director of the Port of Everett. Members of a Stakeholder Advisory Committee include a wide variety of people interested in the future of the airport, including Smith and representatives from Boeing. A third “technical committee” consists of senior airport employees and the advisory team. There is also the Snohomish County Airport Commission, which was established in 2017 to provide recommendations for the master plan and advise the district management on other airport-related matters.

As part of the process, the airport is holding a public comment period ending November 24th. People can comment online at painefieldmasterplan.com. There is also a virtual public session on Tuesday at 11am.

The plan is to be finalized in spring 2023. It requires approval from Snohomish County Council and the Federal Aviation Administration, said airport spokeswoman Kristin Banfield.

An aircraft is pushed into a private hangar at Paine Field, Everett. (Olivia Vanni / The Herald)

So far, the consultant has ruled out another runway at the airport. Almost everything else is still on the table. Improvements to be considered include upgrades to taxiways, access roads, and other paved surfaces.

Based on a 2018 environmental impact assessment conducted prior to the start of scheduled passenger service, Paine Field is limited to 24 daily departures and 24 arrivals. But with more planning and an environmental assessment, “it could take on more,” the report concludes.

Prior to the pandemic, demand for air travel in the Puget Sound area was expected to exceed available capacities by 2027. But the global crisis has dealt a devastating blow to the aviation industry.

The new forecast predicts that demand for passenger services in Paine Field will recover in 2025. According to the forecast, a passenger represents every time a person gets on or off an airplane.

The number is expected to exceed the 1.5 million mark in 2030 and then increase more rapidly in the late 2030s as Sea-Tac Airport is forecast to reach the limit of what it can do without new improvements .

“We have no opinion on the specific restrictions at Sea-Tac or at the time of those restrictions. Our focus is solely on PAE, ”Tubridy said in an email, referring to the three-letter airport code for Paine Field. “The PAE forecast takes into account the impact of the pandemic on aviation as a whole, including passenger service.”

Any growth in Paine Field’s passenger service will also depend on the terminal operator’s ability to attract Propeller commercial airlines. United Airlines announced last July that it would be discontinuing service here.

The terminal’s only remaining airline, Alaska Airlines, recently postponed a plan to add more flights to its airport flight schedule as the COVID-19 Delta variant rose. The airline now expects to operate up to 12 daily departures from Paine Field from Jan. 4, a company spokesman told The Herald last month.

Smith, CEO of Propeller, said he expected passenger demand to return to pre-pandemic levels before 2025.

“We think we’ll be back by the end of next year,” he said with reservations.

“That’s when I started getting out of the fortune telling business. Because nobody knows what will happen. ”

More about the airport master plan

Register for a virtual webinar on Tuesday, November 9th, from 11am to 12pm.

A private plane rolls past Paine Field Tower and the passenger terminal in Everett on Wednesday. (Olivia Vanni / The Herald)

Outside the new FedEx facility in Paine Field. (Olivia Vanni / The Herald)

An aircraft is pushed into a private hangar at Paine Field, Everett. (Olivia Vanni / The Herald)