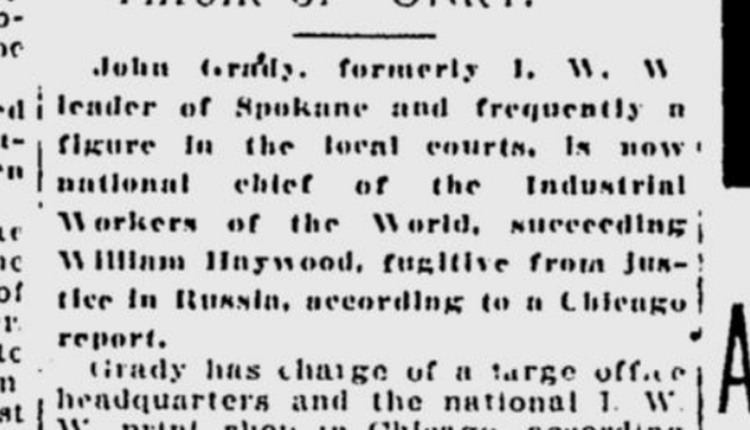 John Grady, a well-known Spokane figure, was raised to the head of a national political organization.

However, the organization was the Industrial Workers of the World – the Wobblies – so Spokane’s bourgeois establishment was not exactly proud.

Grady was remembered in Spokane partly for his work organization and partly for his frequent appearances in court. Two years earlier he had been arrested during a police raid and identified as the “ringleader” and “queen” of the Wobblies.

Grady was now in Chicago, where he was named National Chief of the Wobblies. He told reporters that the Wobblies had a membership of 1.25 million.

Grady replaced William “Big Bill” Haywood, who was a refugee from justice in the Soviet Union.

From the zoo beat: The Spokane Daily Chronicle sent a photographer to Manito Park Zoo to persuade the zoo’s new baby kangaroo for a photo. The photographer was unsuccessful, but managed to take a photo of the “child kangaroo” peeking out of its mother’s pouch.

In a caption, the Chronicle pictured “Ma Kangaroo” saying, “No, you have to stay indoors because the grass is too damp to play outside.”