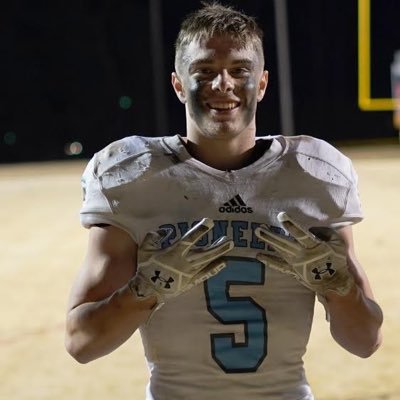 Everett, who ruptured a cruciate ligament in his right knee against Greensboro-Dudley in the opening round of the State Playoffs last spring, worked his tail off during a shortened off-season in preparation for his senior year. And all that hard work finally paid off on Saturday when Everett was offered a Preferred Walk On by Shawn Clark, Appalachian State University football coach.

It’s a dream come true for Everett to be joined by WHS teammate Orlando Leon, who was also offered a PWO from App State.

“I really want to start in college,” Everett told WATA Radio during a half-time interview on Aug. 23. “It was a dream of mine. That’s why I worked so hard to get back for my senior year. It’s my last chance and I wanted to get my name out there. I just wanted the chance to play on the next level. “

And Everett, finally cleared for return by the Doctors in early October, came in five games that season and became a weapon for the Pioneers. He was 24-out-of-25 on extra points and 3-on-3 on field goal attempts. Everett had a 28-yard field goal in the WHS opening playoff loss to Waxhaw-Cuthbertson on November 5.

He averaged 34 yards on kick-offs with two touchbacks and 29 yards on punts, with one within the 20 yards.

“Carter just worked his tail off,” said WHS trainer Ryan Habich during one of his pre-game interviews on WATA radio. “He invested the time in the off-season, he was dedicated and determined to return and all of his hard work has really paid off. We couldn’t put him in (B) this season because of his knee injury, but he found a way to do his bit and he gave us another weapon in the second half of our season. “

And being a weapon is nothing new to Everett, who was an outstanding player on the Watauga Middle School team under Mike Neff. He took that momentum to the high school level, where he played four games for a team 13-2 in his sophomore year and reached the 3AA Western Finals. Everett caught three passes for 86 yards and a touchdown. Defensively, Everett made 17 stops, including 11 solo tackles, and defended two passes.

In his junior year, Everett took the B rear position and finished second on the team in rushing with 464 yards (an average of 4.2) with six TDs. Everett defensively made 24 tackles (nine solos) with 3.5 tackles-for-loss and a fumble recovery.

“Playing the B-back position is tough,” said Everett. “You can’t always carry the ball, but you get hit a lot. But I’m used to it. I just want to help us win. It’s great to be out there every week.”

And Everett will now have the opportunity to do so on Saturdays.