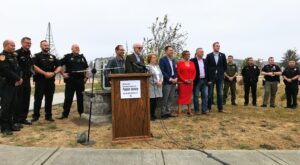 Mayors and Police Chiefs before the news conference. 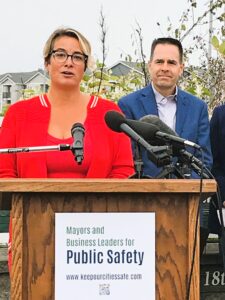 Tuesday afternoon they joined Mayors and Police Chiefs from around Snohomish County at Henry M. Jackson Park in north Everett, Washington to announce the formation of a non-profit 501c4 coalition to develop and implement policies that they say will address ongoing community concerns about public safety .

We’re looking forward to working collaboratively with our state and local officials to find solutions,” Everett Mayor Cassie Franklin told MyEverettNews.com. “Cities are working hard to ensure we have the staff and support systems in place for people experiencing homelessness and drug addiction, but we need the collaboration of state lawmakers who can support commonsense laws and additional support for our overwhelmed Prosecutor’s office and court systems.”

Mayor Franklin says the coalition has specific items they want to take to the Washington State Legislature.

• Legislation addressing the Blake decision, which decriminalized nearly all drug possession in Washington state.
• Criminal justice policies that will allow officers to more effectively use their training, experience and judgment in the field.
• Increased funding for both law enforcement and social services.

“Improving public safety is number one, this is not partisan,” Franklin said. “This is education and advocacy.”

Right now the coalition is made up of Mayors from 15 Snohomish County cities. They are also asking leaders of businesses both large and small in their cities to join them and want the public to understand that they do hear their concerns and are taking the issue of public safety seriously but need the solutions to problems all of the cities are experiencing to come from a coordinated county-wide effort.

The coalition has a website, KEEPOURCITIESSAFE.com, where those who want to learn more or lend their voice to the issue can participate.

Franklin related a story of a person who kept breaking windows of downtown Everett businesses and government buildings. He would be arrested and then immediately released from jail as his mental capacity was not sufficient to assist with his defense. As he didn’t meet the guidelines for commitment to a mental health treatment facility he would start breaking windows again causing thousands of dollars in damage.

“Something is broken in the system,” Franklin said. “Someone not well enough to stand trial but not mentally ill enough to keep in custody, we’ve got to work together on solutions.”