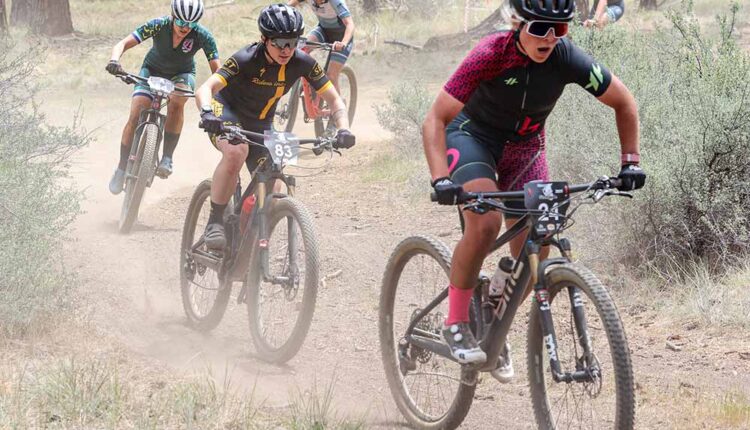 It is estimated that a thousand drivers visited Sisters over the holiday weekend. Five hundred attended the annual Sisters Stampede on Peterson Ridge. Event officials told The Nugget that participants from at least nine states had signed up for this year’s ride. A New Jersey cyclist traveled the furthest and a Tucson rider made the 1,250-mile journey to compete in one of two time trials – the short course (14 miles) and the long course (25 miles).

Almost as many appear to have crossed McKenzie Pass on Highway 242, though the road remains closed nine miles from town. While cars could not pass the snow gate, cyclists drove around it and did it in large numbers. On two separate occasions, The Nugget observed between 40 and 50 bikes heading east in an hour, most of which had started at McKenzie Bridge.

On Sunday morning, groups gathered in town for a return trip on the legendary byway. Bikers report that there are still patches of snow on the roadside.

“Landslide debris and fallen trees are little obstacles that add to the thrill,” said Molly Samuels of Eugene.

She and her partner Brian Wells make the trip every year and tell the atmosphere of the sisters why they chose this course.

They met riders Leanne Jacobs and Sean Arden, both from Woodburn, at the Dee Wright Observatory and they all met for the downhill “adrenaline run”, as Arden happily said. Jacobs said at least 30 drivers gathered in the observatory’s parking lot to share stories, tips, and map reviews.

Rick Goldman and five of his riding friends made the trip to Sisters of Beaverton for the McKenzie ride. It’s an annual affair.

“Sisters is our tune-up for the season,” he said, adding, “The ride is great and the coffee and beer are even better.”

It was impossible to spend the long weekend in the city without meeting cyclists. Creekside Campground was home to several dozen bicycles, including those of a Portland family of five – ages 8 to 35 – who rode down the back streets with two well-behaved dogs on leashes. As with others The Nugget spoke to, this was an annual family camping / biking event.

Spokane’s Mike Allen was eagerly awaiting the start of the Stampede Long Distance.

“The weather couldn’t be better,” said Allen – although he wondered what the dusty paths would do with the times.

“I did a test run on Friday and can’t remember the sandy conditions I see compared to last year,” he noted.

“I would never miss the stampede with the chance to come to Sisters,” said Meghan Duval of Sandy Point, Idaho. “I’ll bring two bikes, one for Peterson and one to just ride around town and enjoy the scene and connect with my friends after the run.”

The only complaint anyone made was waiting for food at the food court, where long lines of hungry, thirsty cyclists contributed to the local economy.

Not all cyclists pedaled. The nugget counted more than 45 motorcycles on Sunday that were scattered in the shopping and restaurant streets. All were in showroom condition, although some were vintage models from the 1970s and 1980s. On chrome and leather rode an eclectic mix of riders enjoying the near-perfect weather with a mix of traditional holiday food and drinks.

Mitch Oberman of the Bike Knights Riding Club in Wenatchee, Washington, spoke for his group of nine classic Triumph riders. “We walked from Yakima to Weed, California in 97 and when we stopped in Madras everyone said to us, ‘You have to take a detour to Sisters,’ and we did and we were damn glad we found you. Quite a place that you have found here. “