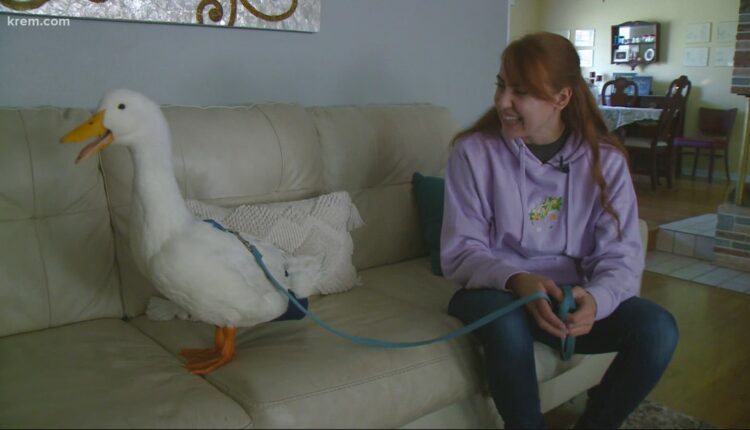 Charlie’s owner, Emma Smith, takes him for walks, in shops, and on the streets.

SPOKANE VALLEY, Washington. Man’s best friend isn’t always a dog. A girl from Spokane found her partner in a duck.

Emma Smith and her sister love ducks, so they adopted a couple as pets.

Smith takes her duck Charlie for walks, takes him to the store, and even takes him to work. She can because of the fact that Charlie loves people and wears a diaper.

Smith said she wasn’t very optimistic about how much Charlie would like the diaper or whether he would even let it put on. But when they started going together, he didn’t care.

Smith ordered a special diaper designed for ducks. It fits over his head, then around his wings, and stays securely on his body as he waddles around.

Smith said it was always an exciting experience walking around with Charlie.

“There is staring and a lot of people taking pictures. It was really nice because he’s just so kind. He loves to be petted and to greet people,” said Smith

Smith said a lot of people who meet Charlie tell her that their interaction made their day. She said that she loves using Charlie to bring some joy to her community.