A USC English professor, Everett’s books play with genre, language and our assumptions about race and gender. In “Dr. No,” he turns to academia to create a brilliant mathematics professor who partners with a billionaire supervillain for a 007-style heist. “No one understands the slippery nature of identity like a spy, and Everett relishes the devices of the spy thriller, wielding Bond tropes as if they were flame-throwing bagpipes or cigarettes laced with cyanide,” writes Jennifer Wilson in the Atlantic.

Kirkus Reviews calls “the novel” a “good place to begin finding out why Everett has such a devoted cult.”

Everett has gained international accolades for his body of work: 34 books, including “The Trees,” shortlisted this fall for the 2022 Booker Prize, and “Telephone,” a 2021 finalist for the Pulitzer Prize.

On Nov. 16, Everett joins the LA Times Book Club for a conversation with columnist LZ Granderson at the Autry Museum of the American West. Admission includes wine, live music by Times editor Christopher Price and browsing the museum after hours. Get tickets.

This week brought news that Everett’s work is coming to the big screen. Deadline reports that actor Jeffrey Wright (“Westworld”) is set to star in a film based on the novel “Erasure.”

“Wright plays Thelonious ‘Monk’ Ellison, an English professor and author who writes a satirical novel under a pseudonym, aiming to lay bare the hypocrisies of the publishing world,” Justin Kroll says. “The book’s immediate success forces Monk to get deeper enmeshed in his assumed identity and challenges his closely-held worldviews.”

What would you like to ask Percival Everett and LZ Granderson? Please share your comments and questions in an email to [email protected]

On Dec 8, novelist Celeste Ng joins us to discuss her new bestseller, “Our Missing Hearts,” with Times columnist Patt Morrison.

Reviewer Bethanne Patrick calls the book a “stunning” new dystopian novel. “The simplest way to put it without spoiling anything is to say that at the core of Ng’s narrative — a 12-year-old boy’s epic quest to find his missing mother — is the all-important question of how we communicate,” Patrick writes in The Times. 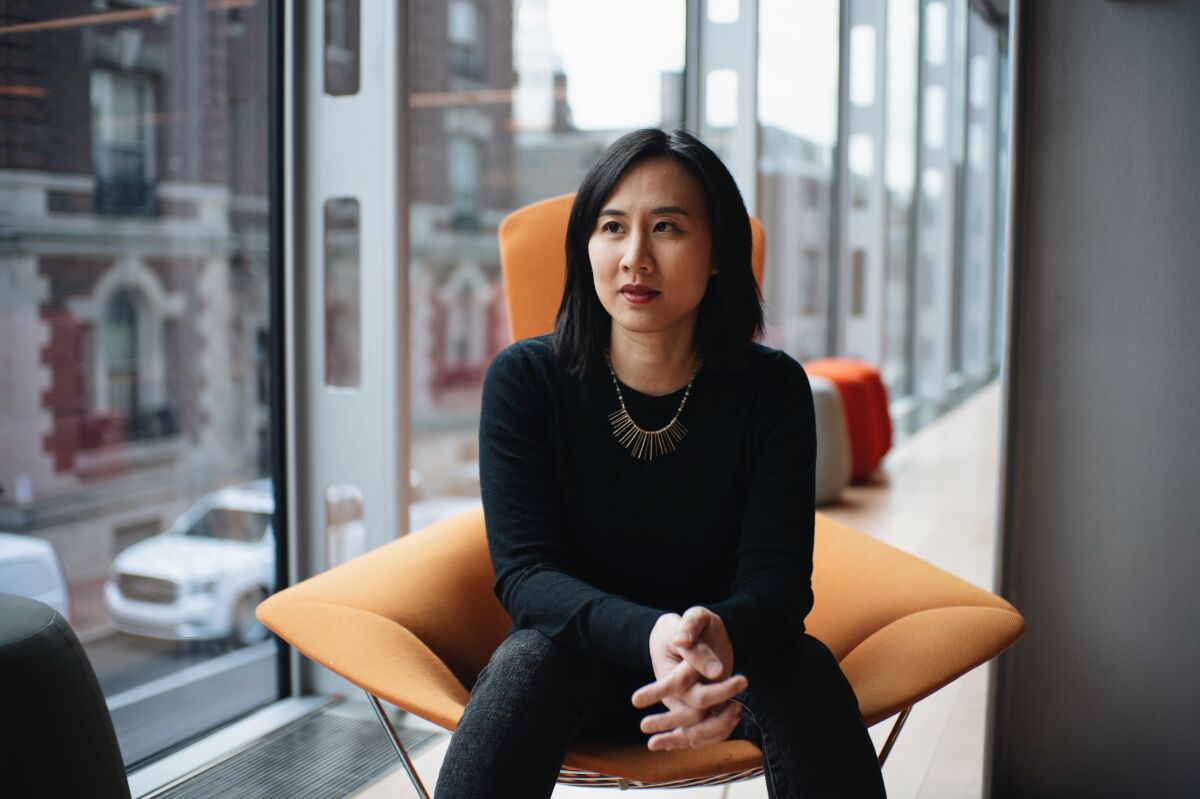 Celeste Ng’s “Our Missing Hearts” is set in a near-future rifle with surveillance and xenophobia.

Next contest: Washington Post book critic Ron Charles points out that Tuesday’s election was just practice for the race coming up next week. Michelle Obama (“The Light We Carry”) and Mike Pence (“So Help Me God”) are releasing memoirs on Nov. 15. Both books respond to the same tragedy: the Jan. 6 assault on the Capitol. “Obama has said that watching the insurrection on TV inspired her to find ways to cope with ‘uncertain times,’” Charles writes in his newsletter. “Pence’s title alludes to his pledge to defend the Constitution when President Trump incited a gang chanting, ‘Hang Mike Pence.’”

Discovering Didion: Columnist Carolina A. Miranda roamed both the Joan Didion estate sale and the “Joan Didion: What She Means” exhibition at the Hammer Museum. Her report.

In memory: Mike Davis’ family members built a Day of the Dead altar after losing the author. His wife Alessandra Moctezuma shared what they put into his ofrenda, and what Davis left for them, with Times podcast editor Kinsee Morlan.

Hidden histories: Telling the history of under-documented communities powers Natalia Molina’s work, which earned her a MacArthur fellowship in 2020. She talks with Dorany Pineda about her latest book, “A Place at the Nayarit: How a Mexican Restaurant Nourished a Community, ” and her next project, a book about the Mexican workers who built the Huntington Library, Art Museum and Botanical Gardens, where she’s the interim director of research.

Holiday browsing: The LA Times 2022 Holiday Gift Guide includes fiction and nonfiction suggestions from Books editor Boris Kachka for the readers on your list. And be sure to check out the cool book club shop, a new selection of hats, totes and crewnecks, too. 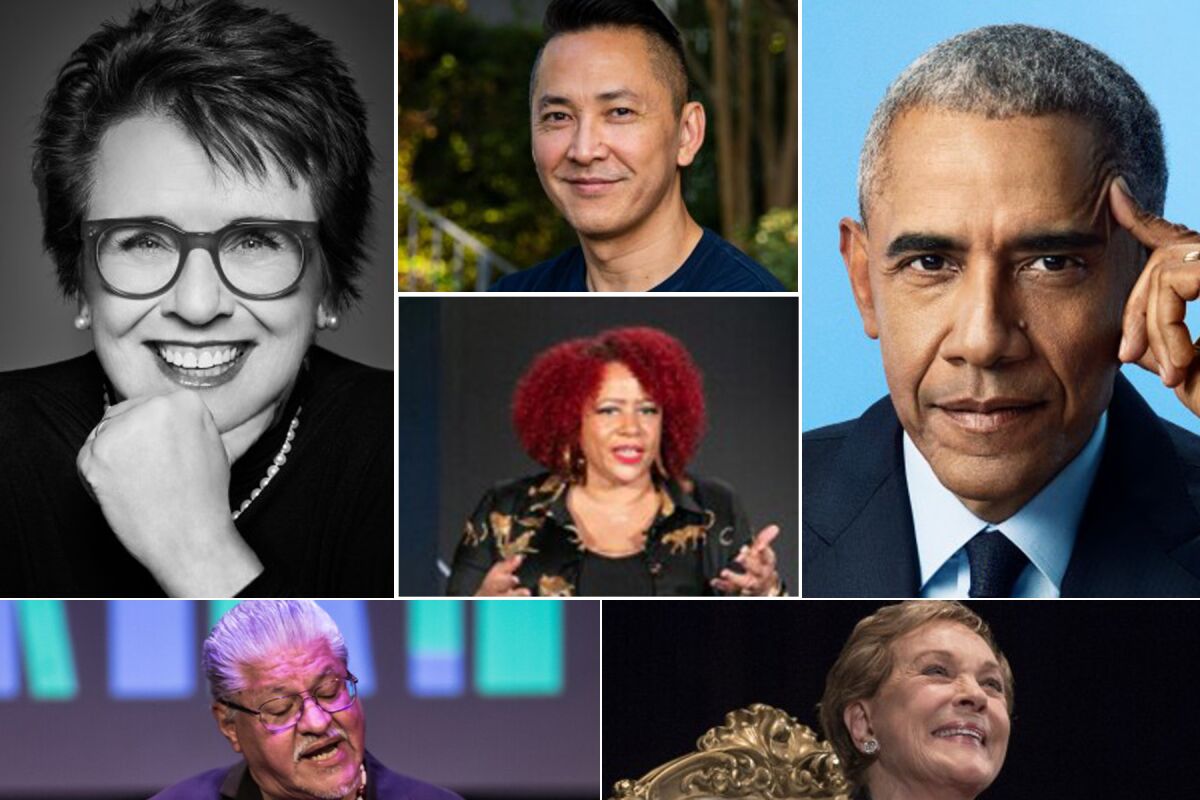 Many readers tell us how much they value the chance to see, hear and meet world-class authors and newsmakers every month. We’re so appreciative of your enthusiastic emails and survey responses. Now take the next step: As we head toward Giving Tuesday, please make your tax-deductible donation to the new Los Angeles Times Community Fund to help us keep going and growing in 2023.

From the Newsroom: Pizza, news and democracy