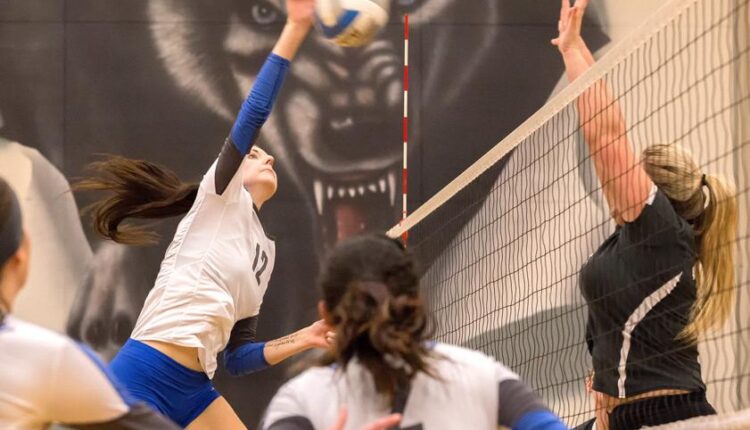 PENDLETON – The Blue Mountain Community College volleyball program has been one of the most dominant teams in the Northwest Athletic Conference for the past decade, and player efforts have not gone unnoticed, with six earning a spot on the 2010 NWAC All-Decade team.

Pendleton’s Kristin Williams, along with Sierra Linke and Robyn Shirmer, lead the way with first-team awards. Hermiston’s Crystal Schmidt was a second choice for the team, as was Rebecca Haight and Samantha Odren.

The Timberwolves had also named women’s basketball player Mar’Shay Moore, a two-time NWAC Player of the Year, to the first team.

Pendleton’s Darian Lindsey was honored for softball in the second team, while he was for Mt. Hood.

Williams, a 6-foot-3 middle man on the 2015 team who reached 42-9, was named 2015 NWAC Player of the Year as a freshman. In her sophomore year, when the Timberwolves were a humble 25-17, she led the team by 77 blocks and was a first-team choice across the Eastern Region.

“I didn’t know this was a thing,” she said of the All Decade team. “I had a couple of people tag me on Facebook.”

Williams, who grew up in Helix, moved to Pendleton High School as a freshman to learn about the sport.

“I started playing in middle school,” said Williams. “We never went to the state when I was in high school. We won the league title a couple of times, but lost in the state play-in game. “

In her first year at the BMCC, she was named Player of the Year and was included in the first team of the NWAC tournament. She was also a first-team All-American. She ended the season with 185 kills with an attack percentage of 0.327 and 87 blocks.

“Kristin never played the middle blocker position before this season,” BMCC coach Dave Baty told the East Oregonian at the time. “She has accepted the challenges and continues to learn and improve.”

After she graduated from BMCC, Williams went to the University of Idaho, but a back injury limited her to part season.

“I injured my back and had to retire medically,” said Williams. “That is one of the hardest decisions you have to make as an athlete.”

Williams stayed in Idaho and settled in as a student.

“I found my major and it worked,” she said. “I completed my bachelor’s degree in architecture in summer 2020. I have another year of master’s degree, then I’ll go into the real world. “

Williams has designed many homes, but she has something else in mind for her thesis.

“I think I’ll go to long-term care facilities,” she said. “I started with interior design and I think that helped me see how people live.”

A setter from Mt. Si High School in Seattle, Shirmer, was named NWAC Player of the Year in 2012. She then played at Lewis-Clark State College in Lewiston, Idaho. In her junior year, she handed out 833 assists for the Warriors.

A native of 5-10 Pasco, he was named NWAC Player of the Year and NWAC Tournament MVP for his sophomore year in 2014 when the Timberwolves won their third straight title and set a 50-4 record. She led BMCC with 273 kills.

Linke played at Eastern Oregon University, where she was an outside hitter. She helped the Mountaineers win the 2015 and 2016 Cascade Collegiate Conference regular season titles and earn trips to the NAIA National Tournament.

Schmidt, a 6-foot mid-blocker from Hermiston, was a two-time Columbia River Conference Player of the Year for the Bulldogs and a 5A first-team pick for all of the states in her senior year.

She had 367 kills for the Timberwolves in her sophomore year and was named NWAC Player of the Year in 2013.

At the NAIA Championships 2016 she was fourth in the javelin throw with a throw of 151-6.

Haight set the Mark Morris record for kills in one season at 326 as a junior. That record still stands.

She was a 5-9 outside hitter, played for BMCC for two years and then played for EOU. She was named Cascade Collegiate Conference Newcomer of the Year after recording 213 kills.

Odren was a 5-5 setter from Auburn Mountainview High School in Auburn, Washington. As a senior, she was the SPSL player of the year in 2012.

At Blue Mountain, she was a freshman and sophomore student in the eastern region of the second team in 2013/14 and helped the college to two NWAC titles.

Moore wanted to play Division I basketball since she was five. She made that dream come true.

Moore, 2014-15 NWAC Player of the Year, was signed by the University of Oregon, making it the first female Blue Mountain student in a sport to play in Division I.

In their sophomore year at Blue Mountain, the 5-foot-8 tall guard from Vancouver, Washington averaged 24.1 points per game for the 19-10 Timberwolves.

Her 700 points for the 2014-15 season are the second highest in NWAC history behind Kristi Fallin of the former Umpqua Community College, who also played in Oregon.

As a freshman to BMCC, Moore averaged 18.4 points per game while shooting 45 percent off the field and had 4.7 rebounds and 2.1 steals per game.

In Oregon, Moore came off the bench for coach Kelly Graves and was a tenacious defensive player.

What Happened To Everett Weston After Season 1

Unhealthy smoke choked Spokane on Saturday, and it couldn’t subside without rain