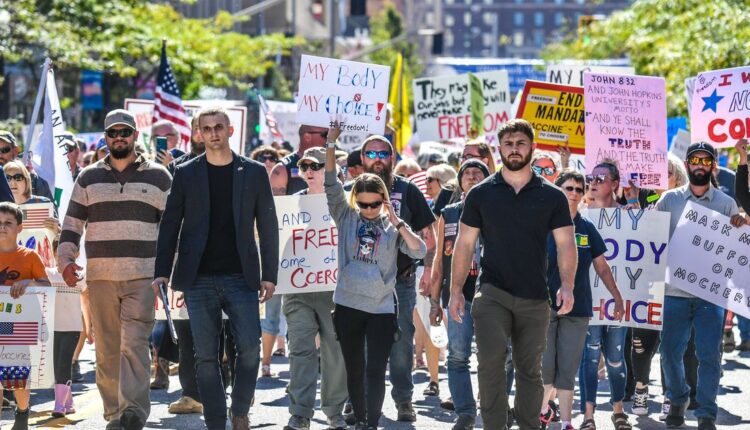 About 4,000 people gathered in Riverfront Park and marched peacefully through downtown Spokane on Saturday as part of a “Medical Freedom Rally”.

People held up signs like “UNVACCINATED LIVES MATTER”, “NO FORCED VACCINE” and “DUMP INSLEE” and cheered the speakers preaching freedom and faith in the park.

Some wore neon green shirts that said “Be Brave or Be a Slave” with the hashtag “NoMandates!”.

Collier is the recruiting director of Understanding the Threat, a group that claims to be the only group in the United States responding in the short term to “the growing threats posed by the Marxist and Islamic movements in America.”

Former State Representative Matt Shea told the crowd that this is the hour that they will be defined as people, Americans, patriots and Christians.

“Any teacher who gets fired start a private school,” Shea said, referring to those who may be fired for refusing to be vaccinated. “Every doctor, every discharged nurse establishes a private clinic.”

Shea said freedom is not a mask, but trusting God to heal.

“Liberty is not a vaccine, not a gene therapy,” he said. “Freedom is to make a decision for yourself.”

After Shea spoke, Collier led the crowd from the park south on Howard Street, west on First Avenue, north on Post Street, east on Main Avenue, and then north on Howard back to the park, where Music and speeches went on.

The police cordoned off streets and monitored the march to ensure that it went smoothly. Apart from a few minor verbal arguments, there were no conflicts.

Some chants were started in the streets, including a “USA” shout.

Gabe Parker, who was holding a sign and marching, said he believed people are losing their jobs because of the vaccination mandate and his girlfriend cannot attend nursing school because she has chosen not to have a vaccination.

“It is not anyone else’s choice to stab themselves in the arm,” said Parker, a Spokane resident. “I’m not against vaccinations at all. I was always for her. “