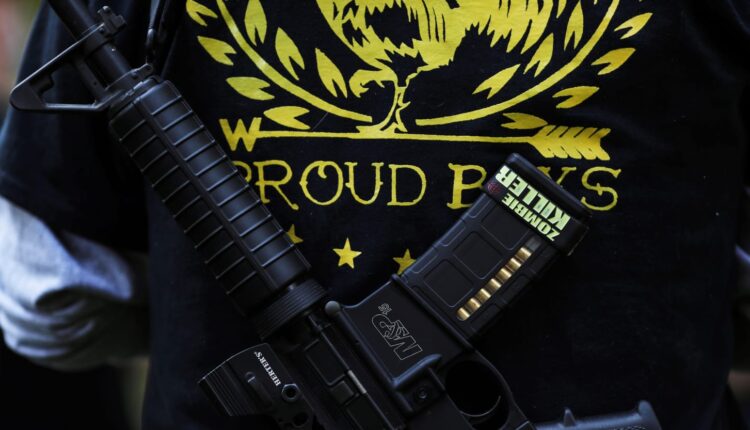 Three schools in Vancouver, Washington, were closed on Friday after a group of anti-mask protesters, including the Proud Boys, tried to gain entry and disrupt the school day.

Skyview High School, Alki Middle School and Chinook Elementary were on high alert after local members of the extremist gang Proud Boys, frustrated parents of students and other anti-maskers protested the requirement that students, staff and teachers wear face covers .

The incident is just the latest example of the Proud Boys teaming up with anti-maskers to threaten school authorities from Florida to New Hampshire over COVID mandates.

According to witnesses quoted by Oregon Public Broadcasting, the Proud Boys attempted to escort a freshman student who was applying for a medical mask mandate exemption to the Vancouver school on Friday. The attempted break-in led to a call for a lockdown.

The freshman mother, Megan Gabriel, had claimed that the mask could trigger panic attacks in her daughter. The school had refused the application.

Patriot Prayer, a local far-right group, rallied support by saying that students would be arrested if they refuse to comply with the mask mandate. to Oregon Public Broadcasting. The claim was untrue.

With signs reading “Masking Children = Abuse” and “Medical Choice: Your Body, Your Choice”, demonstrators gathered in front of the schools and on the sidewalks near buses. Some protesters yelled insults at female students, security forces told OPB.

Chris Erdman, a career specialist at Skyview High School, told The Daily Beast on Friday that the lockdown lasted about half an hour but otherwise did not interrupt school operations.

He said of the protest, “It’s one thing that happens outside, but the students seem to be calm. It’s mostly like ‘let them do their thing’. The school goes on. “

A 16-year-old student named Lucas told OPB, “All learning is interrupted. We have to sit down quietly, not make any noise, and we sat in our classrooms for about an hour and a half. ”He said he later handed out masks to the protesters.

Kyle Sproul, principal of Vancouver Public Schools, told OPB, “Regardless of attitudes towards masking requirements, I think most parents in our community agree that protesting on our school grounds and disrupting the school day is not in the best interests of students. “

The Clark County Sheriff’s office, which includes Skyview, did not immediately respond to the request for comment.

There has been a rash of worrying COVID-related dust-ups in schools across the country. On Thursday, a father with a friend who was wearing plastic handcuffs stormed into the office of an Arizona elementary school principal and insisted the school was breaking the law by asking his child and six others to wear a mask and be quarantined after being in close contact with someone who tested positive for COVID-19.