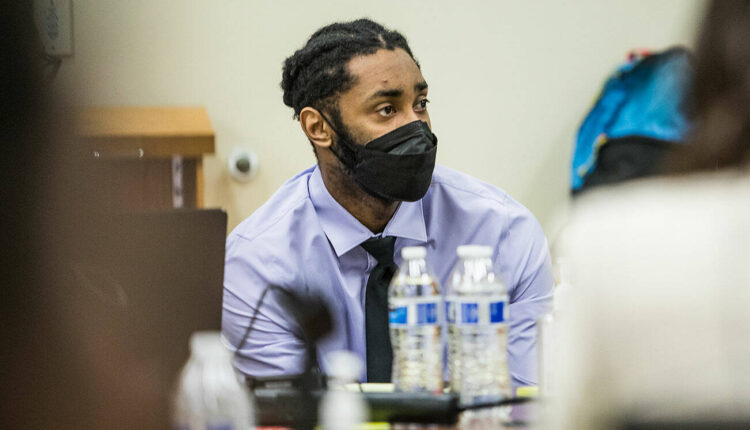 EVERETT – The Everett woman began to fear for her life in 2017.

Her estranged husband called and ordered her to move home. “Or but.”

“Usually it doesn’t feel serious when people are threatened with death,” said the 27-year-old woman on the witness stand at the Snohomish District Court.

But those words scared her, she said.

The husband told her he wanted full child custody and maintenance. He threatened that if he didn’t get these things he would kill her.

“Or what?” the woman remembered asking.

“You heard me,” the ex-husband is said to have replied. “I’m going to kill you (expletive).”

Lynnwood ex-husband Kevin Lewis, 34, is now on jury trial in its third week. He is charged with first degree murder for killing the sister of his ex-wife Alisha Canales-McGuire, 24, in a botched homicide.

Canales-McGuire was shot dead in the front door of a house on the 3100 block of York Road south of Everett. Prosecutors claimed that she shouldn’t be the target of the shots.

According to the indictments, Lewis paid his cousin Jerradon Phelps $ 2,400 to kill his ex-wife for trying to “get her out of the way.”

Phelps and Alexis Hale, 17, drove from Spokane to the ex-wife’s home near Everett on September 20, 2017 to kill her, according to the charges.

But when Phelps showed up in front of the woman’s house at 1:55 a.m., it was the ex-wife’s sister who opened the door. Phelps, then 19 years old, opened fire, the indictment said.

Court records show Lewis left his wife with bruises and bloody injuries when they were still together.

They divorced in June 2017, months before the murder. In August 2017, the ex-wife was granted sole custody of her children.

In 2018, Lewis was sentenced to three years in prison for double second degree assault against his ex-wife. At a hearing on the domestic case, his ex-wife told a judge she believed the fatal shots were intended for her.

But she was away on a business trip in New York City in September 2017. Her sister lived in her home and looked after her three children.

Detectives quickly identified Lewis as a possible suspect of death. According to the detectives, he “played a prominent role as the person with the motive to kill.”

Dozens of people spoke to investigators in the hours following the shooting.

Neighbors testified in court that they heard a sound that resembled a sledgehammer. One went to a window and saw a man running.

A neighbor showed Detectives home security footage. The video showed a man in a white tank top, later identified as Lewis, as he got into a car around 1:13 p.m. and returned at 1:37 a.m. according to shipping papers. Investigators believe Lewis showed Phelps and Hale the semi-detached house his ex-wife lived in.

Detectives knocked on Lewis’ door at 5 a.m. that morning. He replied with a white tank top.

Leads went cold by the summer of 2018 when Hale told two people at a party that indictments said she had killed someone on York Road. The two people gave the detectives evidence of Hale’s admission.

Phelps and Alexis Hale, then 17, were arrested on an investigation into murder and criminal conspiracy to commit a first degree murder.

Lewis was charged with murder in 2019 while incarcerated on his assault convictions. Detectives went to Snohomish County Jail to tell him he was under investigation for the Canales-McGuire murder.

The testimony should last until next week. Phelps was to take the stand.

Under state law, if convicted, Lewis faces only one possible sentence: life imprisonment.

Kevin Lewis listens to Amanda Ruggles’ testimony during his trial in Everett on Wednesday. (Olivia Vanni / The Herald)

The Lower Spokane Street Bridge is open again for an hour; A failing pump will attract attention