25th anniversary of the Spokane Ice Storm in 1996 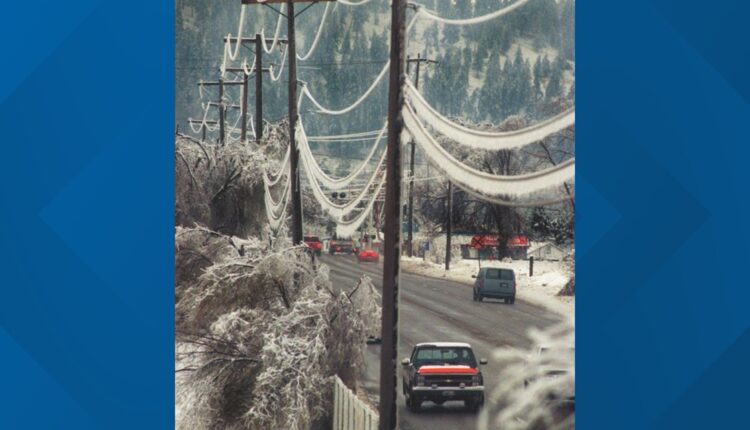 On November 19, 1996, up to 1.5 inches of freezing rain fell in the Spokane area, covering trees, roads, buildings, vehicles, and power lines.

SPOKANE, Washington – November 19, 1996 is a date that has likely frozen its way into the minds of many longtime Spokane residents. Friday marks the twenty-fifth year since one of the region’s worst ice storms.

The National Oceanic and Atmospheric Administration says the day started with two to ten inches of snow that was already on the ground across town. Later that day, up to 1.5 inches of freezing rain fell in the area, covering trees, roads, buildings, vehicles, and power lines.

The maximum temperature at Spokane International Airport was only 33 degrees and 1.24 centimeters of precipitation in the form of rain, freezing rain and drizzle, snow and fog fell there. Icy fog has also been seen in the area.

Trees collapsed in the city under the weight of the ice, leaving more than half of Spokane’s residents without electricity. The mayor declared a state of emergency amid the widespread power blackout.

In October 2019, tens of thousands of Spokane residents were without electricity after approximately four inches of wet, heavy snow caused branches to break off trees and fall into streets and onto power lines. Even fallen branches left some roads impassable.

Four people died during the 1996 ice storm in Spokane and Kootenai counties, and the damage was estimated at $ 22 million in 1996, NOAA said. The storm remains one of the worst for the region on record.

According to the National Weather Service, ice storms are the result of freezing rain, which initially develops in the form of snow well above the ground. As snowflakes fall, they pass relatively warm air that is deep enough to melt them and fall as rain.

If it continues to rain, freezing temperatures just above the surface will quickly cool the droplets. If these cooled raindrops hit objects with temperatures below freezing, they immediately freeze.