‘You don’t replace your mom’: Murray moves to hold off stiff challenge from Smiley in Washington Senate race

LAKEWOOD, Wash. — Sen. Patty Murray (D-WA) doesn’t look like a beleaguered Democrat about to get washed away by Republican challenger Tiffany Smiley and the red wave building across the country. Her supporters are another matter.

As Murray and other prominent Washington State Democrats rallied the more than 50 volunteers and activists who packed a party field office just south of Tacoma on a rainy midday Friday, heads nodded and hands raised when Rep. Derek Kilmer (D-WA) acknowledged aloud what several had told him: They are “anxious.” Murray is facing perhaps her stiffest challenge in 30 years amid a perilous political environment for Democrats.

Polls show a tight race, and pro-Smiley television ads are blanketing television airwaves, bolstered by a late additional investment of $1 million made Wednesday by Senate Leadership Fund, the super PAC aligned with Senate Minority Leader Mitch McConnell (R-KY). It’s enough to worry grassroots liberals that the Democratic Party’s heavy advantage in statewide elections here will not be sufficient to deliver the senator a sixth term.

“No hand-wringing,” Kilmer implored, urging them to turn nervous energy into door-knocking, phone calls, and texting to ensure Democratic voters participate. But some are hand-wringing, nonetheless. “It’s more competitive than it has been for [Murray]. And I think it’s really lousy, the ads that I’ve seen from the other side,” said Joan Fleming, a 76-year-old retiree. “I’m anxious. … I think she’s probably OK. I hope so.”

In remarks to an attentive and energized crowd, Murray emphasized she is not taking reelection for granted and conceded the outcome of Tuesday’s midterm elections is not guaranteed. “It is close, and we need every one of you out there,” she said, encouraging them to make sure as many Democratic voters as possible mail their ballots by Election Day. Washington state runs its elections strictly via the mail, although ballots also can be dropped off.

But Murray, 72, simply doesn’t look or sound rattled the way some incumbents often do upon suddenly finding themselves in a political dogfight amid voters nationwide threatening to eliminate their party’s congressional majorities. “I feel really good,” the senator told the Washington Examiner in a brief interview before heading to Vancouver, Washington, to tour a small business. “I think we’re going to be really successful Tuesday night.”

REPUBLICANS ON A ROLL

Washington state has not voted Republican for president since 1984; it has not elected a Republican to the Senate since the GOP wave of 1994. With the state becoming so reliably liberal, most Democrats holding or running for statewide office here were shielded from red tsunamis in 2010 and 2014. But recent polling suggests Smiley might break her party’s Washington state jinx and help form a new, expanded Senate majority on Capitol Hill.

Murray’s lead has shrunk to 3 percentage points in the RealClearPolitics average. Some private Republican polls show the race tied, generating last-minute spending for Smiley by groups aligned with the GOP. (The Senate Leadership Fund has now transferred a total of $2.25 million to Evergreen Principles PAC, the pro-Smiley super PAC, since Oct. 7.) Republican insiders monitoring the contest say Smiley deserves all the credit for putting this race on the radar.

“Tiffany Smiley is running one of the most powerful Senate races in the country,” said Steven Law, president of the Senate Leadership Fund and close McConnell confidant.

Smiley, 41, is a dynamic first-time candidate with a compelling personal story. She has made skyrocketing inflation and rising crime the centerpiece of her campaign. But Smiley has made this race unusually competitive largely by running as a Republican who resists partisan labels, focusing her campaign message on indicting Murray as failing the basic responsibilities of political leadership.

Smiley’s campaign colors are blue and green, similar to Seattle’s NFL team, the Seahawks — not a hint of red anywhere; and she has appropriated Murray’s decades-old calling card. Since the Democrat’s first Senate race in 1992, she has referred to herself as a “mom in tennis shoes.” But Smiley, whose campaign slogan is “there’s a new mom in town,” regularly says of Murray on the stump: “She’s not the mom in tennis shoes anymore.”

Murray, clad in blue jeans, a blue rain jacket, and pointing to the dark gray New Balance sneakers she was wearing, bristled at the attack.

“You know what so many people around the state are saying to me? You don’t replace your mom,” the senator said. Murray, typically soft-spoken, is giving as good as she’s getting in her escalating war of words with Smiley.

“Did you watch the debate?” she asked the gathering of grassroots volunteers minutes earlier. “I was kind of wondering if I was debating her or Tucker Carlson.” And: “She doesn’t have one idea on how to solve the issues in front of us.” 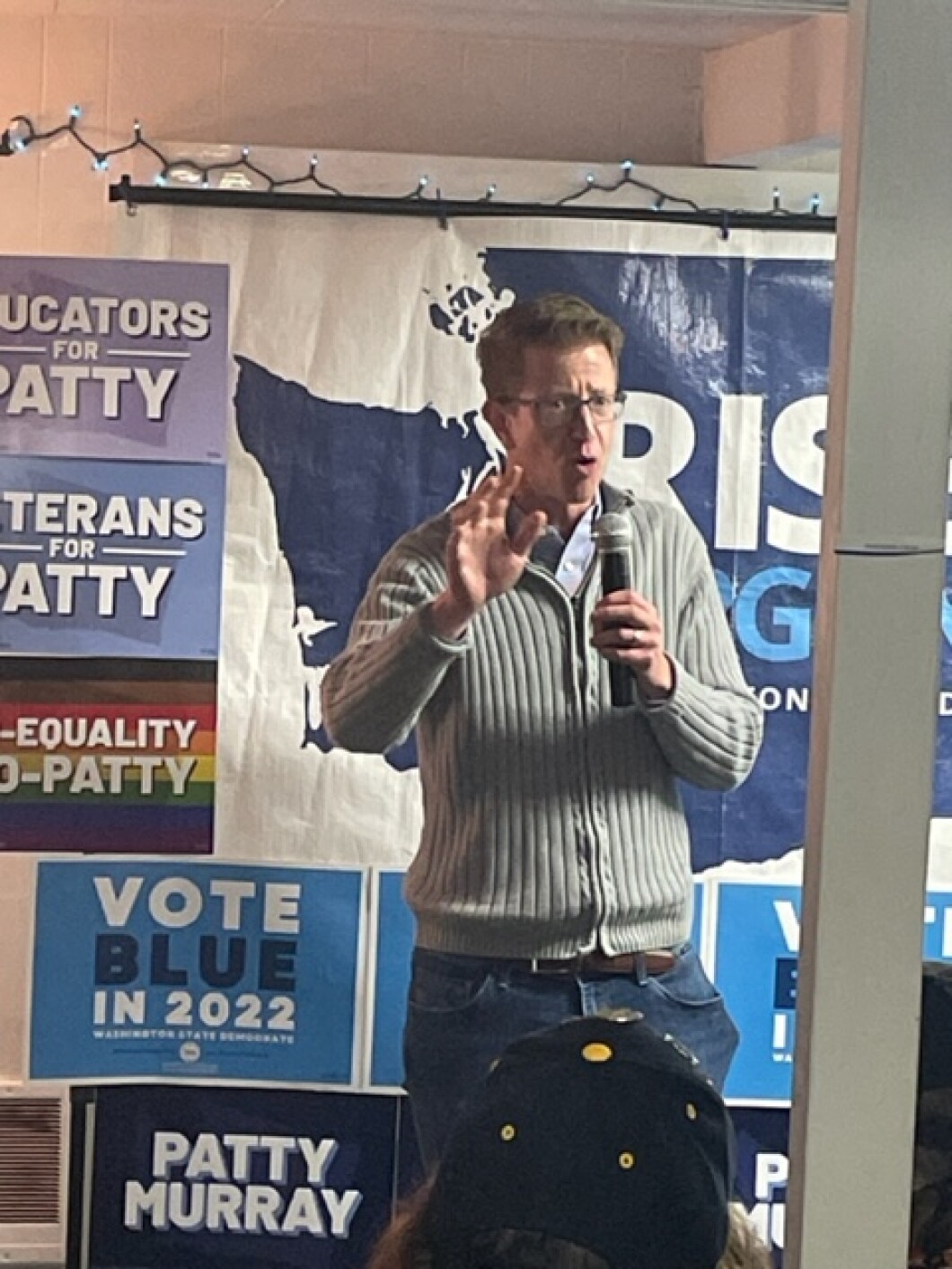 Murray’s itinerary in the final hours of the 2022 campaign is focused on events like this one in Lakewood, a suburban community of roughly 63,000 in Pierce County, blue territory that voted for President Joe Biden over former President Donald Trump by more than 11 points two years ago. The goal: turning out Democratic voters and motivating the foot soldiers charged with making sure they do, in fact, turn out.

Murray is running an unapologetically Democratic campaign, befitting a state that supported Biden over Trump 58.4% to 39%. In other words, rather than shying away from Biden’s agenda and legislation like the American Rescue Plan and the Inflation Reduction Act, Murray is leaning in.

CLICK HERE TO READ MORE FROM THE WASHINGTON EXAMINER

She is putting both laws, or at least the popular measures within each statute, front and center in conversations with voters as she makes her case for what she has been doing to address the higher cost of household goods and concerns about public safety. Murray also devotes time and attention to her commitment to preserve abortion rights and resist what Democrats claim are GOP efforts to undermine American democracy.

Republican lawmakers and party insiders have mocked Democrats for highlighting both issues, particularly because polling shows they are not priorities for crucial independents and swing voters. Yet both issues are top-tier concerns for grassroots Democrats, and Murray cannot win if their ballots are not postmarked by Tuesday.

“People are really energized here to talk about restoring rights and making sure that we, as Democrats, continue to fight for a woman’s right to make her own healthcare choices, to fight for our democracy, to fight for voting rights,” she said. “These are essential to our country work, and it’s motivating everybody to get out and vote.”

West Seattle Blog… | THANKSGIVING & BEYOND: Have something for this year’s WSB West Seattle Holiday Guide?