The White Sox got it done this evening in Seattle—and they used the long ball to do it.

Every game continues to be a must-win game for the White Sox, and Lance Lynn was the right man to have to start this west coast road trip. Lynn didn’t face much pressure all day, going seven innings and only needing 89 pitches to do it. Throwing a first baseman out into right field was the only thing that hurt Lynn throughout the game, as a pop fly off the bat of Abraham Toro fell just in front of Andrew Vaughn and led to the only run of the day for the Mariners.

On the offense, there wasn’t much to speak of – but, when it’s hard to get runs, it’s much easier to get those runs via the long ball. Both AJ Pollock (solo) and Elvis Andrus (two-run) both left the building, giving the White Sox the extent of their offense. The team managed just five hits on the day, but they made them count.

After Lynn departed from the game, Kendall Graveman came on in the eighth, surrendering just a Julio Rodriguez single and *long* flyout from Ty France to keep the game where it was. He turned it over to Liam Hendriks, who was shaker than usual in an inning that saw the winning run get to scoring position. Hendriks would get his 30th save on the season, marking back-to-back years in which Hendriks has hit that milestone.

With the win, the White Sox keep pace in the AL Central and pick up a game on the Twins in the meantime. They are 1.5 games back of Cleveland (pending their game later in the evening) and just one game back of Minnesota. 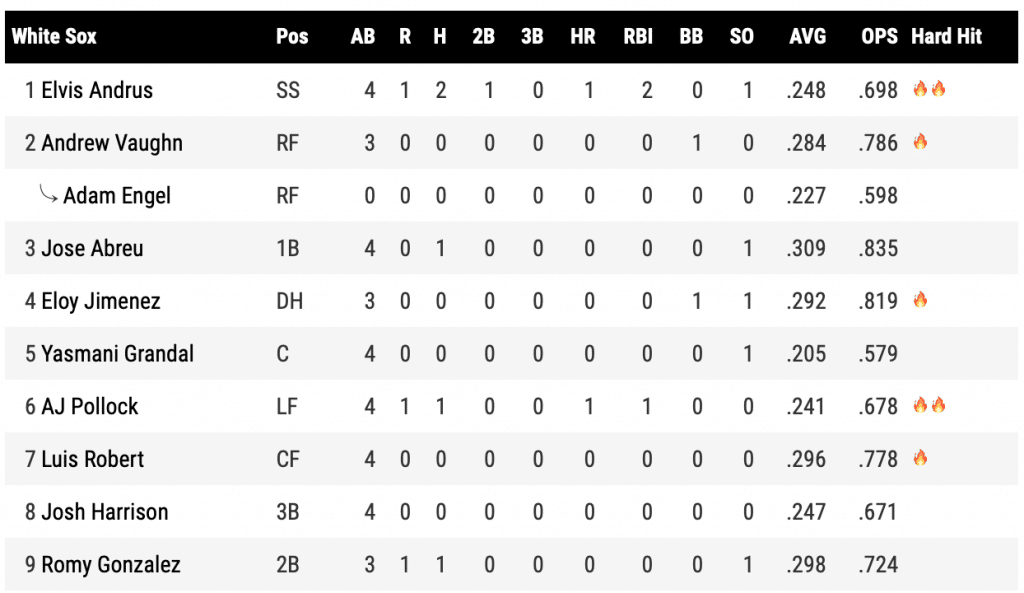 There’s not much else to say about Lynn other than he was completely dominant in tonight’s game. he had all his pitches working and his velocity has remained up and consistent from his early season starts. While there may have been concerns from some on Lynn’s abilities immediately coming back from injury, he’s quieted those concerns recently.

Andrus has been quite impressive since coming over to the White Sox. His glove is his calling card, and he’s been awesome on defense, but his bat has been a great improvement from what would’ve come from the position otherwise in Anderson’s absence. Andrus already has three homers with the club.

Add AJ Pollock to the list of White Sox players who have looked much better at the plate recently. After launching a couple of homers against the Royals, Pollock now finds himself on an eight-game hitting streak.

The White Sox and Mariners will play game two of their three game series tomorrow night. Johnny Cueto will go up against Logan Gilbert in the battle of youth versus veteran.

The game will begin at 8:40 PM CT and can be viewed over on NBC Sports Chicago.

Follow us @SoxOn35th for more updates throughout the season!