We had long been requesting a chance to look inside before it goes into use at the start of the new school year, and got that chance last week: Construction started last summer for the new building on the north side of the campus. It holds two science classrooms and six regular classrooms—and more. Right inside the door that leads from Madison’s rooftop courtyard, you’ll see a “learning stair.” That’s one of several places where Madison students will be able to sit down in the hallway and do work. This has places to plug in, too. And the walls in common spaces are covered with corkboard and similar surfaces to facilitate tacking things up: Inside one of the science classrooms on the addition’s top floor, you’ll notice many windows – the building is full of opportunities for natural light (and the rest is LED-powered). To make up for a reduced amount of wall space, the cabinet surfaces are markable – made from whiteboard-type material. Around the corner, a science-prep room includes appliances such as a dishwasher and refrigerator. Just outside that door are restrooms, including one of the building’s four all-gender restrooms for students. Checking out one of the non-science classrooms, we noted more traditional features such as a whiteboard for projection. The floor carpeting is actually carpet tile. Looking out the window, you’ll see some of the bioretention features that will filter rainwater at the site. The addition’s courtyard also has permeable pavement that allows rainwater through. Back inside, a hallway features more learning seats – also some of what’s known as “friend seating” inset in the wall. And in one stairwell, the wall sports the Madison mascot, the Bulldog, fashioned from ApplePly. 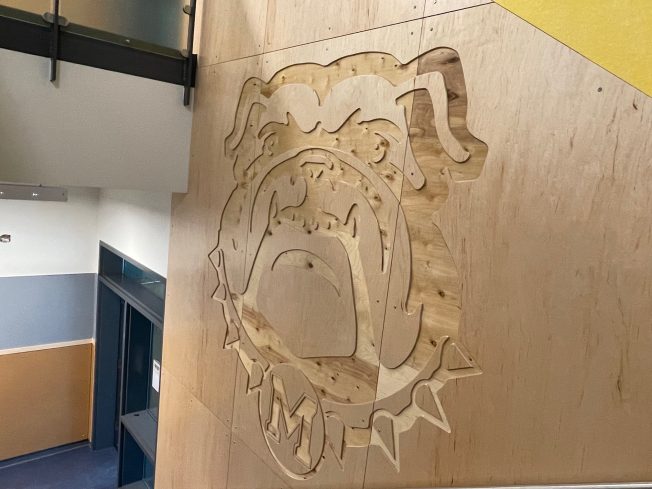 Hallway features include a water-bottle-filling station and more seating by the stairway and along the walls. 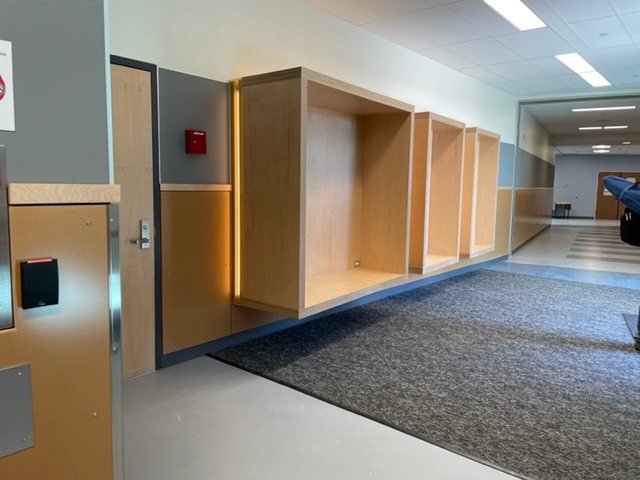 The addition’s interior includes much wood trim, though the exterior’s most dramatic feature is multiple textures of metal cladding. Inside, the transition from new building to old has been made almost seamless. One existing classroom had to be reoriented – now narrower but longer – to facilitate hallway space tying the two together. Some work remains to be done outside the addition, noted SPS project manager Matisia Hollingsworth – a new bicycle shelter will be built, and some of the grading is still to be finished. But the facilities inside the building are ready to go. The 12,500-square-foot project cost $10 million, funded by a state Distressed Schools Grant as well as the BEX V levy. The architects are Studio Meng Strazzara; the contractor is FORMA Construction.

One more big project is ahead for Madison – artificial turf and six light poles for the field – and SPS says that work is now scheduled to start after school gets out next summer. SPS is also building an addition at West Seattle Elementary in High Point; the $28 million project is not ready yet, so the school will spend a second year at the former Schmitz Park Elementary.