From the towering obelisk of the Washington Monument to the stately symmetry of the White House, Washington, DC’s buildings are instantly recognizable around the world. But there’s one landmark that leaves visitors puzzled. As they drive along the Capital Beltway, a gold-spired structure rises hundreds of feet above the traffic like the Emerald City from the Land of Oz.

The grandiose Temple of the Church of Jesus Christ of Latter-day Saints remains a mystery to many. Unless you’re a church member, you’re not allowed entry. That is, except for the next several weeks.

Continue Reading Article After Our Video

The building, which has been closed for renovation since 2018, has opened its doors for free public tours, offering a rare chance to see inside the usually off-limits house of worship.

Since the open house started on April 28th, thousands of people a day have been streaming to the Kensington, Maryland, site that is known locally as the Mormon Temple. This is actually the second time the public has been invited to look inside. Before its initial dedication in 1974, 750,000 people visited, including First Lady Betty Ford.

I grew up in the DC area and was part of that initial crowd, visiting with my Boy Scout troop. I don’t remember much about the tour, other than the excitement of getting to visit a building that looked like Cinderella’s castle. This time around, I was struck by the light.

The building has no windows but is sheathed in white Alabama marble. The sun shines through the thinly cut stone, bathing the interior in an ethereal glow. Two of the structure’s corners hold vertical rows of stained glass reaching from the ground to the roofline. The color shifts from vibrant shades of red to orange, blue, violet, and then white. During the day, the colorful light streams in, and in the evening, it projects out.

“The higher you go in the building, the brighter the light,” explains Kelsi Flint of Vancouver, Washington, who is serving on an 18-month church mission to the region. The increasingly brightening light symbolizes how church members’ faith brings them closer to God, she said.

The building’s easily recognized by its six spires, the highest topped with an 18-foot, two-ton statue of the Book of Mormon prophet angel Moroni, who blows a trumpet, and is covered in 24-carat gold leaf.

The opportunity to visit was irresistible to Alison Hanks-Sloan, a high school principal in nearby Prince George’s County, Maryland, who came with her family.

“I’ve always loved exploring religions,” says Hanks-Sloan. “When I heard that tickets were available, I had to go.”

Her husband, Anthony Michael Sloan, said he has long wondered about the church, which is such a landmark that it’s usually mentioned in daily radio traffic reports. “It rises like a fortress above the Beltway,” he adds.

A visit starts with volunteers placing disposable covers on the shoes of everyone entering the structure. The building is furnished with light-colored carpeting, sure to stain under the footsteps of thousands of visitors. When the temple is operating, church members start their visit in changing rooms, where they don simple white garments. 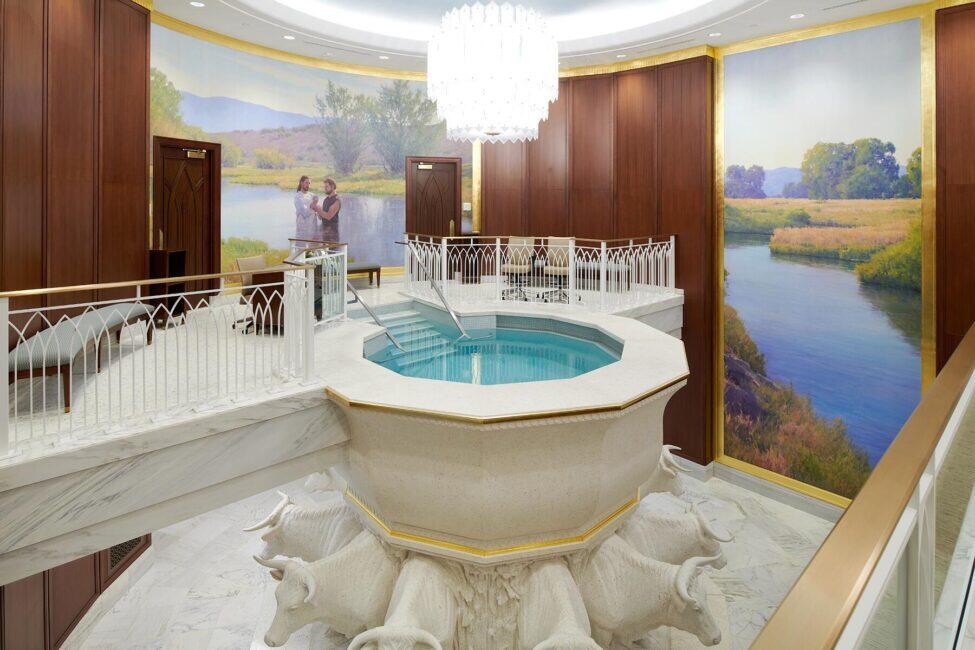 The temple is reached by crossing a walkway, which symbolizes entrance into a holy place. The first stop is a Jacuzzi-sized baptismal fountain supported by a dozen life-size stone oxen, representing the 12 tribes of Israel. Some church members come to immerse themselves in the water in order to baptize the dead, a ceremony meant to tie deceased people to the faith.

Since its founding in the 1820s by Joseph Smith in New York state, the religion has seen enormous growth and slowly worked its way into the American mainstream. In its early years, members faced persecution and fled to Utah, where the church is headquartered. It now has nearly 17 million members worldwide. Commonly known as Mormonism, the faith has in recent years preferred to call itself the Church of Jesus Christ of Latter-day Saints to emphasize its ties to Christianity. 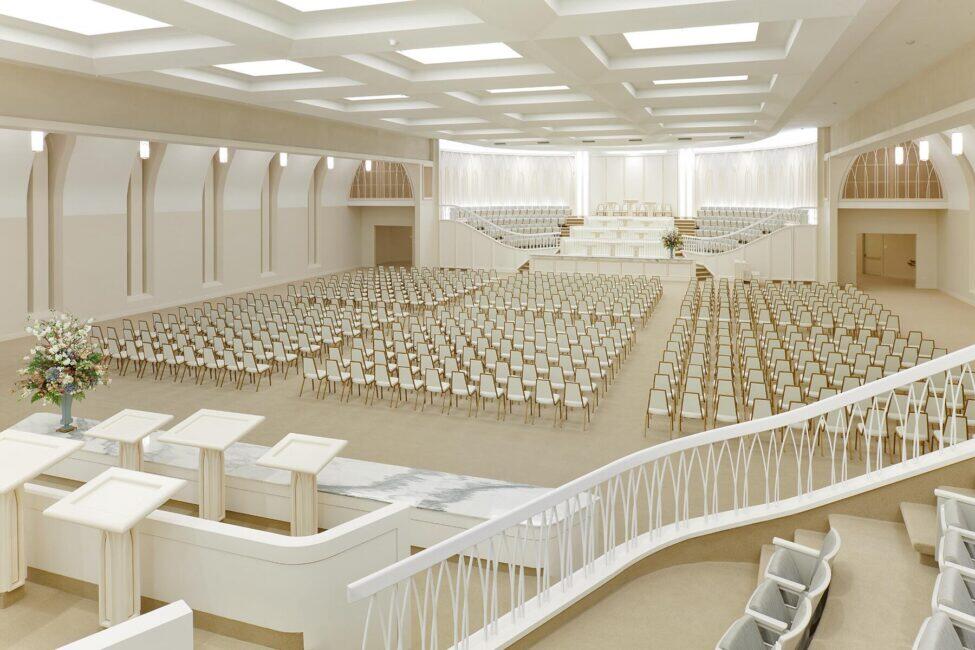 Surprisingly, the temple doesn’t have a large area for communal worship as you’d find in a cathedral, mosque, or synagogue. It’s designed for smaller ceremonies, like the sealing of marriages. The building has 10 rooms for these rituals, which are meant to bind couples and their families together for eternity. The chambers are lined with silk and designed with facing mirrors that show participants endless reflections of themselves, symbolizing their bond to the afterlife.

Volunteer tour guide Jenny Hodson says the rare public open house helps people understand her faith, which she admits can be mysterious to the public.

She says privacy has its roots in devotion. “It’s not a secret; it’s just sacred.”

But today, she was eager to show me holy places like the Celestial Room, a bright space in the heart of the building. Soft chairs and sofas line the carpeted chamber, which is lit by 13 chandeliers—12 in alcoves and an enormous Austrian Swarovski crystal fixture hanging in the center.

The room is meant to represent heaven, offering a place for silent prayer and reflection, and providing a glimpse of eternity. For Hodson, a mother of seven, it holds personal memories too. “It’s where my husband proposed to me.”

When it opened 48 years ago, the Washington building was the religion’s first temple east of the Mississippi River, the third-largest after others in Salt Lake City and Los Angeles. At 288 feet, it’s also the tallest temple. Its size was necessary to accommodate church members from across the East Coast and South, along with the Caribbean.

Now temples dot the globe, with locations in Boston, New York, Philadelphia, Atlanta, the Dominican Republic, and many other sites. But the Washington temple remains one of the most striking, as evidenced by the widespread interest in its open house. The church says it may host more people this year than in 1974. 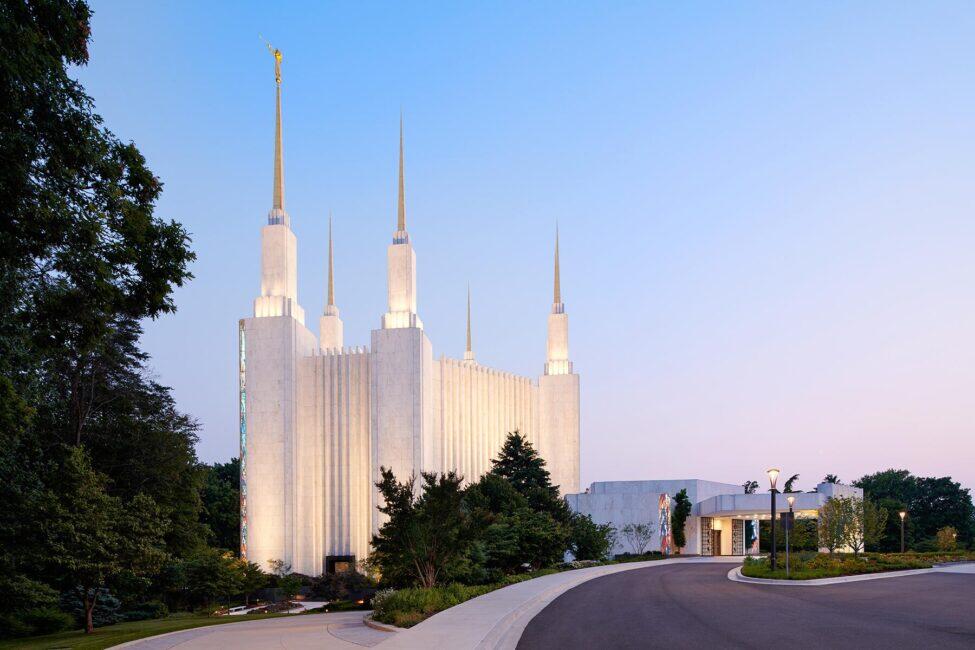 “We welcome everyone,” said Anne Golightly, who has helped lead the temple’s open house committee. “We hope that our visitors will sense the feeling we feel of peace, and a feeling of connection that we find when we worship here.”

After its rededication as a holy site on August 14th, the temple will again be closed to all but certified members of the church. Then the public will be welcome at a visitors center on the grounds, where interactive exhibits and a small model of the building offer a glimpse of the landmark that towers over Washington.

Tickets are available for tours through June 11th. While admission is free, a ticket is required for those who drive or take a shuttle from the nearby Forest Glen Metro station. But visitors on arriving foot or by rideshare can come any time daily, excluding Sundays, from 9 am to 9 pm.