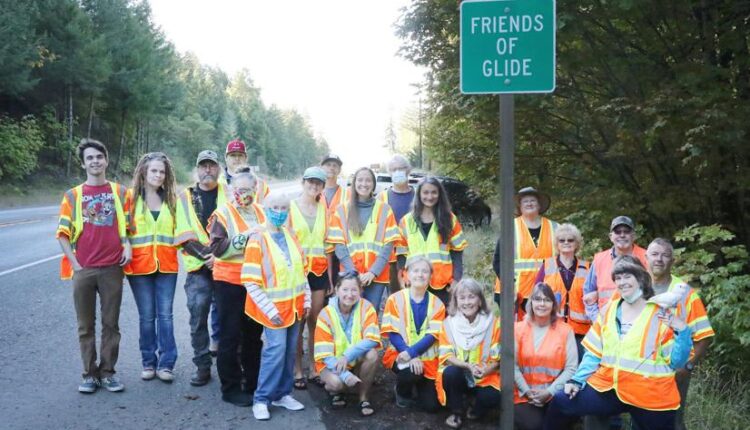 GLIDE – Dozens of volunteers will be scattered along the sides of Highway 138 East in the Glide area as the community begins its annual Glide Fall community cleanup event on Saturday.

More than three dozen people have already signed up to help with the event, which will stretch from mile post 12 west of Glide Transfer Station to mile post 20 near Idleyld Park. A mile (1.6 km) stretch from the green Glide Bridge to near The Narrows Tavern is skipped to accommodate traffic from the nearby fire camp on French Creek Road.

Lori Pedersen, a Glide High School graduate and long-time resident, is a consultant with Green Elementary. She commutes on this stretch of highway twice a day and was frustrated by the amount of rubbish that was strewn on her driveway. So eight years ago she decided to start a biannual cleanup.

But she was struggling to get traction.

“I just couldn’t get it going well,” said Pedersen, who started her campaign in 2013.

That man was Richie Gabbard, who, with the help of Pedersen and his site’s advertising, helped start annual community cleanups in both spring and fall.

“He started it and just left it to us,” said Pedersen.

Then Barbara Pieske stepped in.

Pieske – formerly Barbara Bickle – spent most of her 45-year teaching career as a librarian in the Glide school district. She returned to the ward in 2016 after serving 15 years at Ficrest Elementary in Vancouver, Washington.

“That was the first time that I was interviewed for a job,” says Pieske with a laugh.

When she returned to Glide, Pedersen said Pieske had taken over the reins to continue cleaning up.

“Even though it was my original baby, Barbara did a great job of continuing the project and keeping it on track,” said Pedersen.

Volunteers are not assigned specific areas, they just pick a place to start and work for as long as they want. Some volunteers can travel a few hundred meters and others can travel up to two miles.

While the event officially begins on Saturday, it is expected to continue over the next few weekends, subject to volunteer availability. The Oregon Department of Transportation helps dispose of the garbage collected.