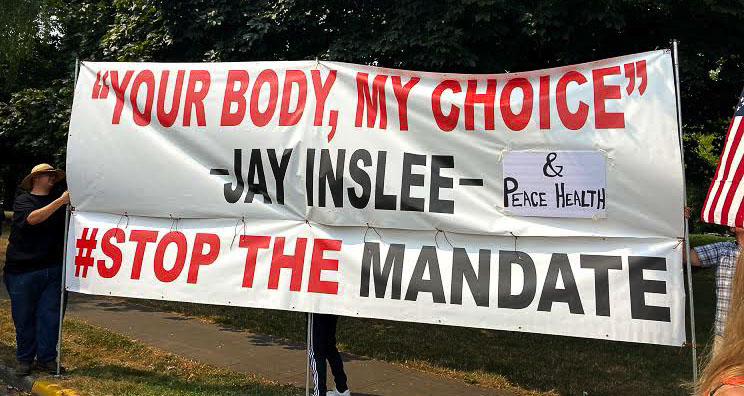 The Office of Congressman Jaime Herrera Beutler told Clark County Today that Congress has allocated approximately $ 250 billion to develop and distribute vaccines. Some of this money was used for COVID testing and public health containment measures. People don’t have to pay for the vaccine.

The FDA recently approved the Pfizer BioNTech two-shot vaccine called Comirnaty. According to the Washington Department of Health (DOH), it’s the same as the vaccine previously approved by the Emergency Use Authorization (EUA) and they can be used interchangeably.

“The vaccine is now available in Washington as it has the same formulation as the EEA. Vendors will continue to use and order the same inventory as always so they already have it in their freezers. But one important clarification: it is open to everyone, not just citizens. Citizenship status is not verified or required to get the vaccine, ”according to the DOH.

However, neither that money nor FDA approval has alleviated public tensions or concerns of many citizens about the vaccines. Governor Jay Inslee has issued a vaccination mandate for all civil servants, teachers, childcare workers and healthcare workers.

Many people are reluctant to “get the jab”. Over 1,000 people protested against the governor’s mandate in Olympia last Saturday. Hundreds of people have protested several times in Esther Short Park in Vancouver.

Citizens protest in Vancouver against Governor Jay Inslee’s mandate and PeaceHealth’s decision to have all of their workers vaccinated. Yesterday PeaceHealth gave unpaid leave to employees who did not comply. Photo courtesy Jessica Wilkinson

“The fact that one of these experimental brews received FDA approval makes absolutely no difference to my decision to refuse the injection,” said a Cowlitz resident. She was told that if she does not get the vaccination, she will be fired.

Vancouver’s PeaceHealth originally reported that 80 percent of their workers were vaccinated. But hundreds of their employees have protested against the August 31 deadline set by the company.

As the largest employer in southwest Washington, an estimated 700 to 900 PeaceHealth employees will be affected by the deadline. While other hospitals like Kaiser Permanente have accepted and considered religious and medical exemptions and even extended deadlines for their staff, PeaceHealth reportedly did not.

“They have made no attempts to make reasonable provision for exempt employees, including employees who tried the first dose of the COVID-19 vaccine and had an anaphylactic reaction,” said Melissa Kolb, a 29-year-old PeaceHealth employee. “Housekeeping, care and nursing staff are at an all-time low and PeaceHealth is willingly putting the community at risk because of their difficult position on this mandate.”

A nurse at PeaceHealth St. John’s Medical Center in Longview recently announced at a meeting of the Cowlitz County Commissioner that 33 percent of hospital stays on the hospital’s COVID floor are fully vaccinated. She said hospital patients sway up and down and there were times when 100 percent of patients were vaccinated on the floor.

Her husband owns a business in Woodland. She has had COVID. Her husband, who is older and has comorbidities, didn’t get it. She now has natural immunity.

Your point of view is that the vaccine is not working. “We have a lot of groundbreaking cases. The vaccine doesn’t work the way it was designed. “

She mentioned that the Longview facility has had a staff shortage since March and it’s not just COVID patients that are causing the problem.

Another citizen pointed out that Israel has a 90 percent vaccination rate and is still experiencing a significant outbreak of the Delta variant of COVID. Current cases, despite the vaccinations, are higher than last January’s peak. Israel’s grim COVID data suggests vaccines alone won’t stop the pandemic, one headline reads.

Longview Hospital had 39 inpatients for COVID-19 as of Monday, August 23, up from 24 a week earlier. The hospital increased its COVID-19 unit on the fourth floor from 20 to 32 beds earlier this month. St. John staff recently began converting eight rooms in the intensive care unit (ICU) into COVID-19 isolation units, according to a press release from the hospital.

Michael Clevenger said his healthy 27-year-old niece spent three days in the hospital and nearly died after receiving her first vaccination. She had an oxygen saturation of 84 percent. Today she has permanent lung damage and cannot enjoy hiking and other activities that she loved before the first shot. He also said a colleague spent two days in the hospital and suffered kidney failure the day after his vaccination.

After nearly five hours of public input and debates over two sessions, Cowlitz County Council passed two resolutions on Tuesday opposing vaccine mandates. The first was that the board will not require vaccination as a condition of employment for county employees who are hired and administered by the board and its unelected departments. “

On Wednesday, PeaceHealth said that more than 94 percent of PeaceHealth caregivers had met the employer’s COVID-19 vaccination requirement. Those who did not were put on unpaid leave, according to the organization.

The Washington State Nurses Association filed an unfair labor practice against PeaceHealth on Aug. 20 for making a “unilateral decision” to leave workers given a medical or religious exemption without negotiating with the union, said Ruth Schubert, spokeswoman for the Association.

Washington State ferry workers are now planning “sick-outs” to protest against the governor’s mandate. WSDOT says the reservation system was closed ahead of the planned protests. Other road-repairing transport workers have protested across the state as “stop vaccination mandate” is becoming a rally.

Recently, the FDA approved a third injection of certain “at risk” patients to boost their immune systems’ response to the current surge in the delta variant of COVID-19.

Dr. Scott Gottlieb, former FDA commissioner, said there are groundbreaking cases of people who have been vaccinated contracting COVID-19. There are breakthroughs across the age spectrum, including young people, he said. “You see it more pronounced in older people who are vaccinated.” 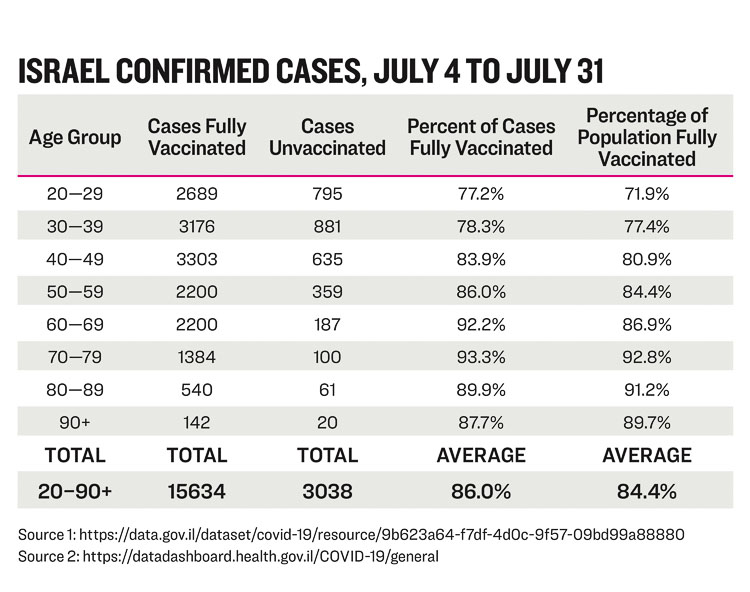 Israel has one of the highest proportions of vaccinated people in the world. The recent surge in COVID-19 cases in the country shows that 86 percent of the new cases between July 4th and July 31st were fully vaccinated. Artwork by Jennifer Margulis

Gottlieb shared that the CDC is not pursuing groundbreaking cases, so you’ll need to look at data from Israel or the UK.

“This is really the debate among the public health population because what they are saying is that we may not need a booster dose because the vaccines are still doing their job to protect people from hospitalizations and serious illnesses.

“The premise was never that they would prevent all infections,” he said. “We took it for granted that the initial data showed that the vaccines were very effective at preventing infections.”

Washington State and healthcare workers must now be fully vaccinated by October 18 or may lose their jobs.

Governor Jay Inslee and the state Department of Occupational Safety also said people who refuse to get the vaccine and are then laid off may not become unemployed.

Many have said, based on previous Supreme Court rulings, that the governor’s move was constitutional. According to a 1905 ruling – which has been upheld many times – the Supreme Court ruled that governments can impose mandatory vaccination laws that are “necessary for public health and safety.”

Others point out that the Supreme Court upheld a Massachusetts law that required vaccination against smallpox. That didn’t happen in Washington. “Anyone over twenty-one years of age who is not under guardianship, refuses or fails to comply with such a requirement loses US $ 5,” says the case. That $ 5 in 1902 would be $ 159 today.

The Washington Federation of State Employees (WFSE) filed a lawsuit to prevent Inslee’s vaccine mandate from taking effect after the state and union failed to reach a collective agreement. They represent around 47,000 public sector employees.

Jessica Hofer Wilkinson contributed to this report. Wilkinson is a freelance writer, home teacher and mother of four, and a nursing home chaplain. She lives in Clark County.