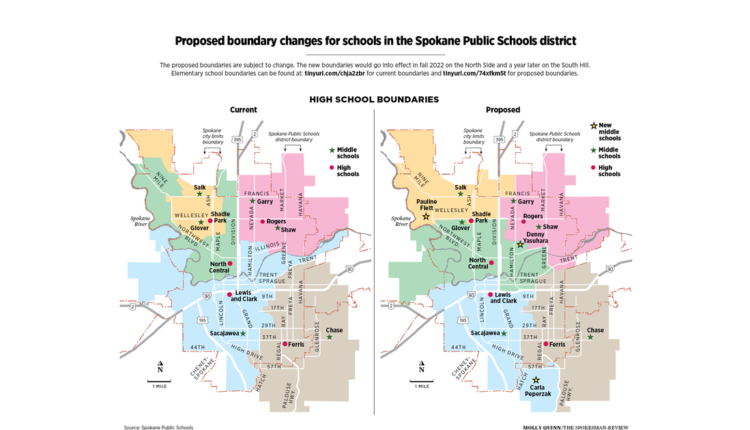 Confident that justice issues will be addressed in the future, the board of directors of Spokane Public Schools agreed on Wednesday evening for a comprehensive reorganization of the borough’s boundaries.

The 5-0 decision included almost 18 months of work by the district and its Boundary Adjustment Committee, numerous and sometimes bitter public forums and finally three long discussions by the board within as many weeks.

The first major redrawing of the district boundaries in almost 40 years was forced by the imminent addition of three new middle schools and the relocation of sixth graders to these schools.

The new boundaries will take effect in the fall of 2022 in north Spokane and a year later on South Hill.

“There has been a lot of disagreement on this issue,” said CEO Jerrall Haynes after the vote. “We understand that not everyone in this community agrees.”

This also applied to the board members – above all Jenny Slagle, who had questioned the proposal for reasons of equity and urged it to be re-examined in two previous meetings. For example, the new Denny Yasuhara Middle School in northeast Spokane will have around 90% free and discounted lunch, while the new Carla Peperzak Middle School in upper South Hill will benefit from a more affluent population.

However, it was Slagle who pondered on Wednesday.

“I am grateful that you gave me the time to find answers to the questions,” said Slagle. “The community will continue to hold us accountable for every decision we make.”

The proposal relies heavily on cohorts – the same groups of students staying in the same schools as they advance through elementary, middle and high schools – and placing students in schools that are walking distance from their homes. But it seems to be taking a step back in terms of equity.

In Wednesday’s presentation, the district again responded to proposals to mitigate the differences between its richest and poorest schools.

These included reducing the impact on students “unduly affected by the boundary changes”, investigating the placement of magnet programs at North Side High Schools, and investigating a possible expansion of the APPLE program to include K-8.

Prior to the vote, advisor Harium Martin-Morris, a former board member of Seattle Public Schools, reported on the success of the district with similar measures after redrawing the borders in 2009.

At Cleveland High School, the introduction of a STEM program helped increase the graduation rate from 48% to 99%.

Decades earlier, the district attempted to achieve racial socio-economic equilibrium through bus travel and saw enrollments drop by almost half.

Board member Mike Wiser pointed out another factor in approving the boundary change.

At previous meetings, Wiser had suggested some minor changes to the borders.

“But to get there, we’d have to bring the community back together,” said Wiser. “You would literally have to start from scratch.”

“I don’t think further delays would be helpful,” said Wiser.