The Return of the Seattle SuperSonics? Here are 4 NBA Stars You Forgot Who Once Called Seattle Home

Published reports surfaced this week about possible upcoming NBA expansion. While those reports didn’t dive deep into the particulars, two cities were named as potential homes for NBA franchises.

Seattle and Las Vegas reportedly top the list of new franchises. Seattle was the home of the SuperSonics from 1967-2008 before the franchise relocated to Oklahoma City. Although follow-up reports stated the NBA has no expansion plans, it’s still fun to talk about the Sonics. Here are four former NBA stars you may have forgotten that donned the green and yellow Sonics uniform.

Bill Cartwright of the Seattle Supersonics shoots a free throw against the Washington Bullets during an NBA basketball game circa 1995 at the Capital Center in Landover, Maryland. | Focus on Sport/Getty Images.

Cartwright was known for his days with the New York Knicks and the Chicago Bulls. The 7-foot-1 center was the third overall pick by the Knicks in 1979. He made his lone All-Star appearance of his 15-year career in his rookie season when he averaged career-highs in points (21.7) and rebounds ( 8.9).

In 1988, the Knicks traded him to the Bulls in a deal for power forward Charles Oakley. With the Bulls, Cartwright was the starting center on three championship teams. He put up 9.2 points and 5.5 rebounds in his six seasons in Chicago.

As his career wound down, Cartwright signed as a free agent with the Sonics right before the 1994-95 season. He appeared in just 29 games, starting 19. He averaged 2.4 points in 14.8 minutes. Cartwright retired after the season. 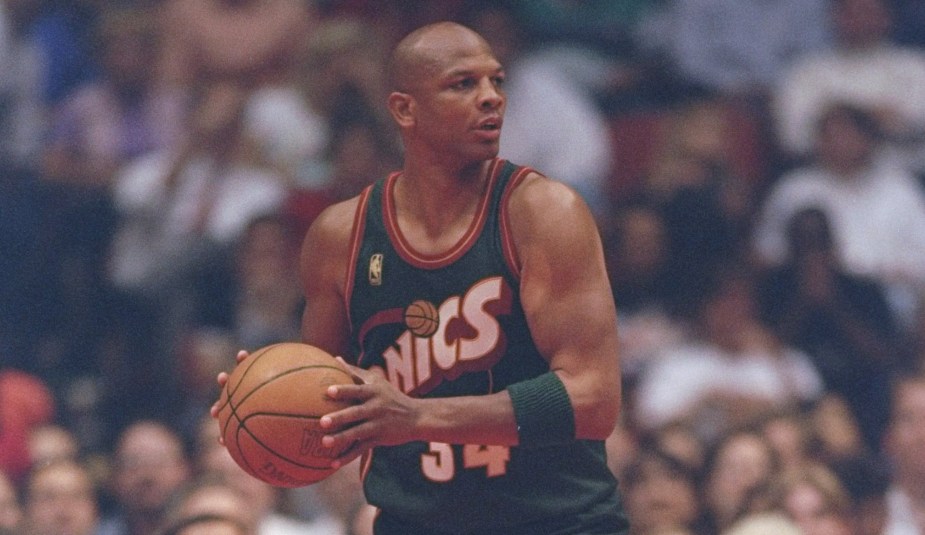 Terry Cummings of the Seattle Supersonics looks to pass the ball during a game against the Houston Rockets at the Summit in Houston, Texas.
| Brian Bahr / Allsport.

Terry Cummings played 18 years in the NBA, most notably for the Milwaukee Bucks and the San Antonio Spurs. He earned both his All-Star appearances with the Bucks, the first coming in the 1984-85 season and the other in 1988-89.

He spent six seasons with the Bucks after the beginning of his career with two years playing for the San Diego Clippers. With Milwaukee, he averaged 19.4 points and 7.8 rebounds.

Cummings spent the next six seasons with the Spurs, where he put up 22.4 points and 8.4 rebounds in his first season. The 6-foot-9 forward returned to the Bucks for a year before joining the Sonics for 45 games during the 1996-97 season.

After leaving Seattle, Cummings also played for the Philadelphia 76ers, the New York Knicks, and the Golden State Warriors. 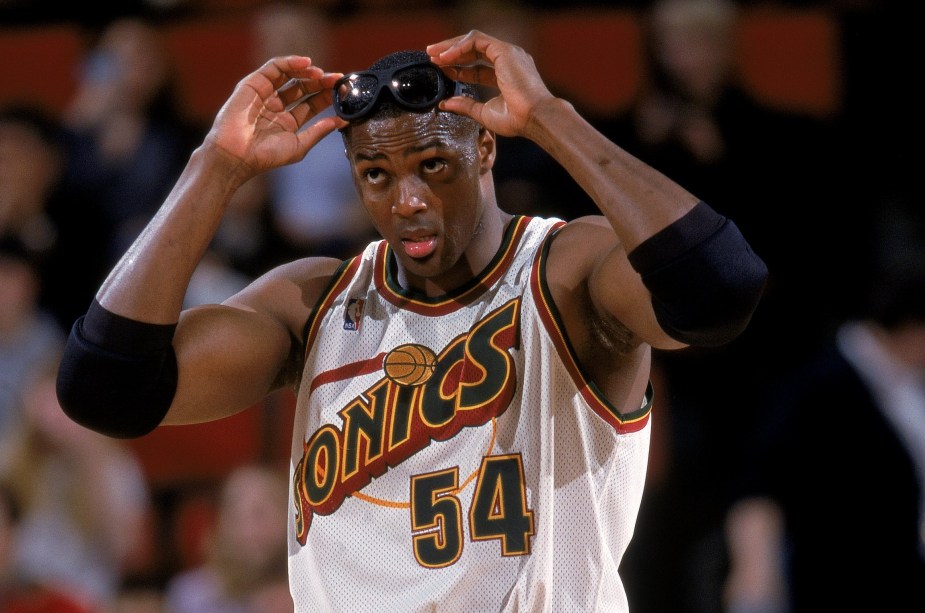 Horace Grant of the Seattle SuperSonics looks on from the court during the game against the Atlanta Hawks at the Key Arena in Seattle, Washington. | Getty Images

Like Cartwright, Grant is known for teaming up with Michael Jordan with the Bulls. A four-time NBA champion, Grant was drafted by the Bulls with the 10th overall pick in 1987. He spent the first seven years of his 17-year career in Chicago. During that stretch, he put up 12.6 points and 8.6 rebounds and made his lone All-star appearance in his final year with the Bulls.

Before the 1994-95 season, Grant signed a free-agent deal with the Orlando Magic. He spent five years in Orlando before being traded to Seattle in a deal for Dale Ellis.

His time with the Sonics didn’t last long. He was part of a four-team trade that sent him to the Los Angeles Lakers after playing just the one season in Seattle.

Grant returned to the Magic and then played a second stint with the Lakers after his time with the Sonics. 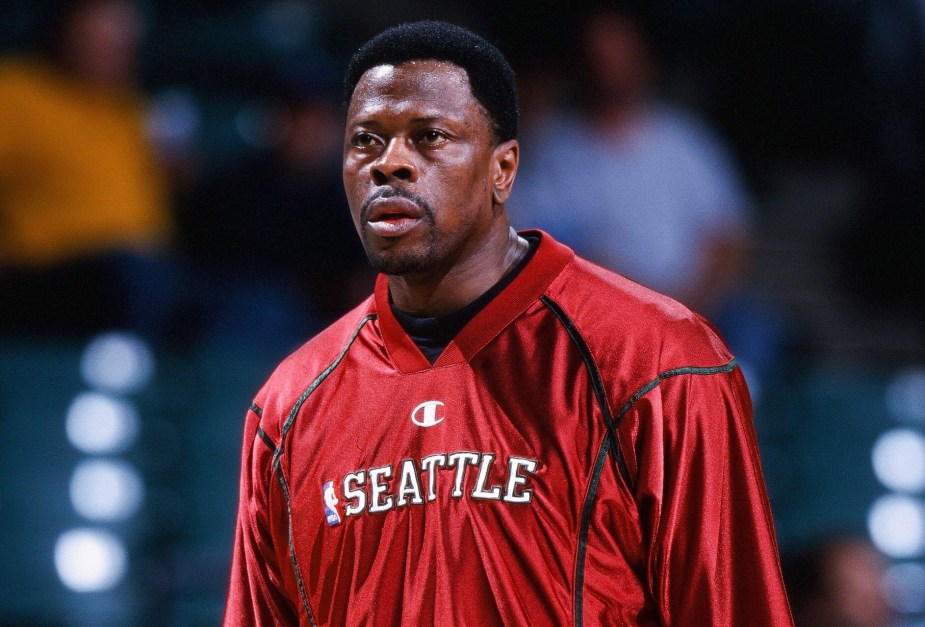 Patrick Ewing of the Seattle Supersonics during the game against the Charlotte Hornets on November 9, 2000, at Charlotte Coliseum in Charlotte, North Carolina. | Sporting News via Getty Images.

Ewing, of course, made his mark with the Knicks after they made him the top pick in the 1985 NBA Draft. An 11-time All-Star, he made an immediate impact in the NBA, winning Rookie of the Year honors.

The Knicks traded the aging Ewing to the Sonics before the 2000-01 season. There, he started all 79 games at center and put up 9.6 points and 7.4 rebounds in 26.7 minutes. He played just one year with the Sonics. After Seattle, he ended his Hall of Fame career in Orlando, where he played 65 games with the Magic, starting four.

All statistics courtesy of Basketball Reference.