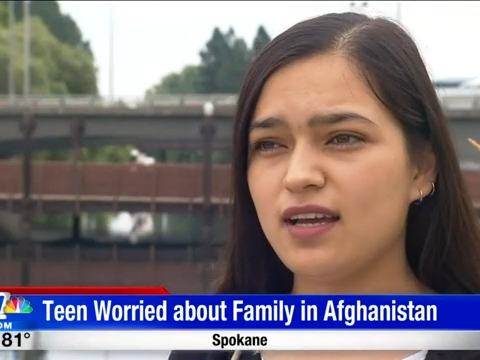 A Spokane family hold on tight as they watch their home be taken over by the Taliban and worry about their loved ones gets hurt.

Yalda Shirzai and her family moved from Afghanistan four years ago – but her sister’s family is still in Kabul, hiding from the Taliban.

“We’re all very upset – she’s in danger and she’s very scared,” she said.

The Taliban swept through Afghanistan like a wave, taking the capital and Kabul on Sunday.

Their rise to power came after the American military took them from them two decades ago.

“I can’t believe it happened so quickly,” said Shirzai.

Those who are around are scared, including Yalda’s sister and her young family.

“They hide in their homes and don’t go outside because if they do, the Taliban will treat them badly,” she said.

Shirzai said her sister feared neighbors would tell the Taliban that they have families in America.

She said that if they found out they would assume that she and her family would go to America soon too, but Shirzai says that her sister and family have no chance of coming as her family is not American Is a citizen.

You could come four years ago because Yalda’s mother worked for the US embassy.

As they celebrate that their brother and family are here, concern for their sister grows.

Yalda says it is difficult to check in with her sister because the internet connection is extremely poor in Afghanistan.

The takeover of the Taliban affects everyone, but especially women.

We spoke to Shirzai just two months ago when she graduated with the excitement of a full drive to Gonzaga in her head.

But now, she says, it is difficult for her to think about school.

“The students are all excited to start college next week and I am very upset and afraid of my sister in Afghanistan,” she said.

In all of this, Shirzai said it was important for her to still go to school, be the first in her family, and plan to become a doctor.

“I try to be strong and never give up and get an education to defend women’s rights,” said Shirzai. “I want the Taliban to let women work, let them go to school, because that will rob them of their chance to be successful.”