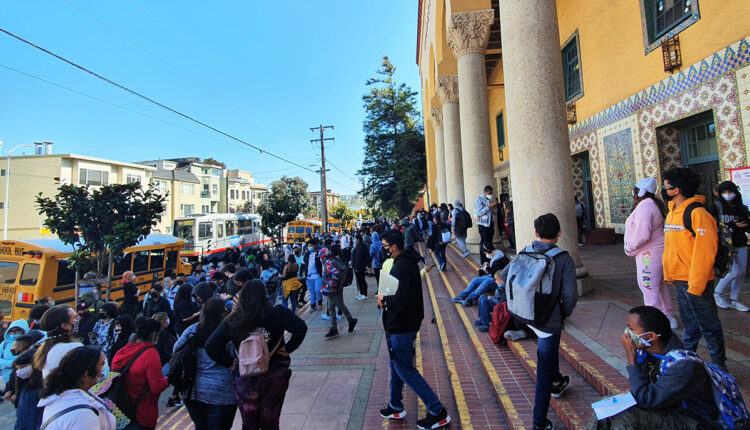 In the final minutes of the school day – the first day for San Francisco public schools – excitement rose as parents and guardians waited on the front steps of Everett Middle School for their children to storm out.

And there they were. Students, backpacks hanging from their shoulders, shirts crooked, leaving the doors – some to cheers and applause from several parents and guardians waiting outside.

The controlled chaos at the end of the school day was expected – and missed. Students from Cesar Chavez Elementary, Buena Vista Horace Mann K-8, Everett Middle School and Mission High School reported back from a first day that seemed almost normal with only a few remains of the Covid-19 pandemic.

“You can play with people instead of just watching videos,” said Sammy after his first day in sixth grade at Everett Middle School. “I actually met some cool people.”

Sammy, a sixth grader from Everett Middle School, poses in front of his school for a portrait with his parents Stephen and Shoshana on August 16, the first day of the fall semester of 2021. (Photo by David Mamaril Horowitz / Mission Local)

Yaritza, a undergraduate student at Mission High School, said students generally knew they had to keep their distance and hide. Most of them were pretty careful, she added.

And what a difference personal learning made, she said.

“You could understand better, you can ask questions to the teachers, and they are ready to revise it with you,” she said. “When you’re on zoom, the teacher doesn’t know you are trying to reach him.”

In Buena Vista, Horace Mann, a faculty member, used a megaphone to warn parents that they would have to call their students individually; meanwhile the students, masked, hung around physically distant cones and waited. The parents quickly flocked to the front and told the assistant headmaster their child’s name so they could take them home.

Meanwhile, Tagalong siblings were dragging mothers and begging for ice cream from the strategically positioned paletera outside. Still masked, the students are squeezed by waiting parents and reunited with their own.

Benji, a fifth grader at Buena Vista Horace Mann, said the school was pretty good, but “it was all different”. He explained that children are being forced to stay in their class because of Covid-19, which means he won’t be able to interact with about half of his friends.

“The break was very different,” he said. “In the garden or in the play area there was no for everyone. Now it’s done with lunch and go to that particular section. ”

Regardless of that, Benji personally finds it much less “boring” than the Zoom course. In addition, his WiFi was disconnected again and again last year, which led to problems. The best part about being back? “To be with my friends and now to know that we can go to school.”

Flores Colin came out of the school yard, her winter coat from that morning shed. After the day was over, she knew a lot more; Not only did she love her new classroom on the third floor – “I was only on the second floor before” – she also raved about her new teacher, who was especially nice, she said.

Yaskera, 8, befriended her classmate Andrea – her favorite part of the day. In the classroom she learned the meaning of words. . “You can send messages and speak,” Buena Vista third grader Horace Mann said in Spanish. Your favorite word? “Friend.”

Haniel, 7, said she was most looking forward to hanging out with her best friend Talia, whom she only met today. “Tomorrow I’ll have two chocolate sandwiches with my best friend,” Haniel explained.

Or enter a custom amount

David is one of those San Francisco locals who gets upset every time they talk about City College. He has a degree in journalism there and from San Francisco State University, which he graduated from the latter in … More from David Mamaril Horowitz

From Jerusalem to Food Truck Fridays, the Spokane couple learn about the rigors and rewards of business