“You’re lifting your body with the finest muscles in your body,” said owner Sherrie Martin as she pointed to her wrists. “As opposed to your legs that normally lift you.”

The group had several performers who awed the crowd with their skills.

With a couple of long and thick yellow silk ribbons, suspended from a stand similar to those that hold swings on playgrounds, performers climbed up the silk to about 20 feet in the air and dangle in different positions.

Climbing up the silk and each position was held, through wrapping or tying of the silk.

“Some of those wraps are designed to get into a move and do a move, but sometimes they put in a certain wrap for a rest,” said Martin. “There’s all kinds of different things.”

Martin said they go to several fairs throughout the summer. Some locations they have returned to year after year and others are new opportunities. The performers also vary from performance to performance.

“It depends on availability,” said Martin. “This is an all-volunteer troop.”

The group varies in age from children to adults as well. At Wheat Land, one of the stilt walkers was only 15 years old.

“They love the art and sport of this,” Martin said.

She explained that it is a combination of art and sport and that only a certain percentage of those that do it, want to perform.

She also said that it is something fun to tell people about themselves that they don’t expect in icebreaker situations. Hunter has been with the group since 2012.

Martin noted that aerial performance arts are a great option for children who aren’t interested in traditional sports or are looking for something to stay active between sports.

There are other skills that relate to aerial performance such as aerial hoops, stilts and juggling that they bring when they perform at fairs.

Martin said what drew her to aerial work was her background and interest in gymnastics and movement in the air.

Spokane Aerial Performance Arts opened in September of 2011 with a class of 41 students. It has now grown to 85 youth and 50 adults.

Rebecca Pettingill may be reached at [email protected] 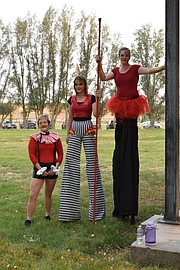 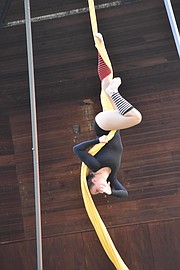