Seattle Thunderbirds at Portland Winterhawks, Game 3: Preview, updates, chat, how to listen and watch the stream

The Winterhawks are up 2-0 in the series, after a late 2-1 win from a spectacular play by Jaydon Dureau to set up Gabe Klassen with the shorthanded winning goal late in the game. Taylor Gauthier won the goalie battle again after Thomas Milic made a costly turnover to set up Dureau’s setup. It was the second game in a row a special teams play decided the game late. And the Winterhawks’ defensemen have played to a draw a Seattle group that looked better on paper.

Portland is in better shape than the standard 2-0 lead, because they’ve already won a game on the road, with the series starting in Seattle because of scheduling. They have three games at home to try to win two more, and as a backup plan they’ve had a good record at accesso ShoWare Center.

The downsides: the offense hasn’t gotten going, in either playoff round. In the playoffs they are only averaging 2.8 goals a game, 8th among all the playoff participants, and 7th among the teams that are left. And, while it may not matter much to the present team, Portland historically hasn’t always played well at home in the playoffs. The Prince George series was the first time in their last eight playoff series they’d won all their games at home; they’d lost two home games in five of those series, and in those series they were 5-11 at home. So history suggests this isn’t quite over yet, but if they win Wednesday, it will be pretty much.

Classes is the leading scorer in the series with 3 points; Fromm-Delorme and Kozak have 2. Neither of the top forward lines has clicked on a consistent basis, but they’ve won games with isolated single plays.

Hanus has 2 points in the series, both in Game 1 when he was the top performer.

Gauthier at .959 has the top save percentage in the playoffs. 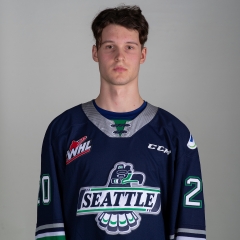 As the Thunderbirds try to climb out of a 2-0 hole, their first task has to be to figure out how to beat Gauthier. It’s hard to beat a goalie with a .944 save percentage, although they’ve come close twice. Task two is to make some plays in the 3rd period. They’ve had six close games against Portland since January and have lost them all.

Davidson and Ciona have 2 points each (Svejkovsky also does although he’s been wrongly gifted an assist that should be Korchinski’s). Rybinski and Roulette have made little impact, which most certainly has to change for them, and Schaefer’s impact has been taking bad penalties.

Korchinski has played decently, he should have one assist for a setup in Game 2. They need a LOT more from Knazko.

Milic was playing well in Game 2 until he tried to keep playing going after a save during a Seattle power play and turned the puck over to Dureau for the winning goal.

Join us here at my site. Everyone is welcome.

100 years ago in Spokane: A grand jury found the city’s schools were hotbeds of immorality and came up with a list of the possible reasons