Seattle is in ‘a criminal and humanitarian emergency,’ baker says as rampant crime forces businesses to close

Seattle is in the midst of “a criminal and humanitarian emergency,” a bakery owner who indefinitely closed her business over safety concerns told Fox News.

Olga Sagan said she shuttered one of her three Piroshky Piroshky locations in February after a surge in shootings and drug use outside her Pike Place store created a dangerous environment for her employees. The Russian-born baker has been offering hand-crafted traditional Russian pastries in the Seattle area since 1992.

“We have a criminal and humanitarian emergency in the city,” Sagan told Fox News.

The area near Third Avenue and Pine Street has seen a string of shootings and violent incidents in recent weeks.

Police officers shot and killed a man on March 5 after he rammed his car into a federal building and fired a rifle. A 15-year-old boy was shot and killed on March 2, and days earlier, another man was killed near an Amazon office building.

A fourth person was shot in the face nearby on Feb. 21.

Several other businesses in the area also suspended operations in response to the violence, including McDonald’s, Amazon and Qumulo, a cloud technology firm.

Sagan said downtown Seattle’s main intersection has a long history of drug use and criminal activity, but was “still tolerable” prior to the pandemic.

Seattle police responded to the area of ​​Third Avenue and Pine Street on Sunday afternoon for a fatal shooting.
(Seattle Police Department)

“As COVID came in and downtown emptied out, I feel like the criminal activity has really taken over the streets,” she said.

Sagan said that when Piroshky Piroshky and the rest of the city began opening their doors after more than a year of lockdowns, “we ended up dealing with people selling drugs, buying drugs” and using drugs in broad daylight.

She shared a graphic video she took one morning while opening her store. It showed dozens of individuals smoking and injecting drugs on the sidewalk outside her shop.

“It was to the point where it’s an open drug market,” she said.

Sagan believes the failure to crack down on criminal activity ushered into heightened violence.

Two weeks after Sagan suspended operations at Piroshky Piroshky, Amazon announced on March 11 that it would temporarily relocate its 1,800 workers from its office at Third Avenue and Pine Street, citing the increased violence in downtown Seattle.

Surveillance video shows the moment a man attacked a woman with a baseball bat in Seattle.
(KCPQ)

Sagan told Fox News that the final straw for her was the fatal March 2 shooting of 15-year-old Michael Delbianco at the 1500 block of Third Avenue, near Amazon’s office building.

“There is a kid who got killed there and a couple more people in the last months who lost their lives,” Sagan said.

“This is not a good business environment,” the baker said. “That was my message for the last six months, but I honestly have run out of messages to send.”

After the outcry from business owners, the Seattle Police Department set up a mobile precinct along Third Avenue.

The spike in crime comes after the Seattle City Council approved a $7 million cut to the police department budget. The department’s budget has shrunk by $36 million over the last three years.

Seattle’s police force has also struggled with attrition, losing a net of 225 officers over the last two years, according to a local Fox affiliate. 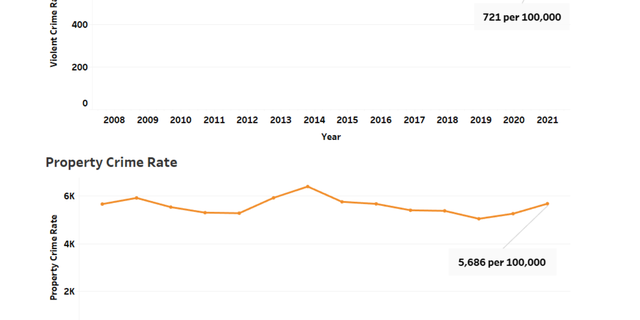 The Seattle Police Department unveiled a strategic plan Tuesday to rebuild the force and its relationships with the community. The department, under the plan, aims to improve its recruitment and retention, invest in more data-driven approaches to targeting high crime areas and repair bonds with the community through relationship-based policing.

“This is not a closed plan. We – I – need your help,” Diaz wrote in the plan. “We need your ideas. We need your commitment.”

Sagan told Fox News: “It’s a complex issue. I hope that maybe this mayor can approach it productively from all kinds of perspectives, from legislation to services to policing.”

“Now we have big employers that are speaking out about it,” she added. “Maybe it’s finally escalated enough that the messages is being heard.”

Everett to seek bids for paved trail around Silver Lake