The Seattle Freight Advisory Board will get a new slate of members soon. It’s a chance to turn an adversarial relationship into a collaborative one. (Photo: SDOT)

Seattle is about to have a new set of voices advocating for increased consideration of how goods are moved around the city and the region, as the city’s freight advisory board is poised to be completely refreshed with new membership this fall. On Tuesday, the Seattle City Council’s transportation committee approved nine new members to comprise the board. Apart from the member on the board appointed by the Port of Seattle, the slate represents a completely new board.

The previous iteration of the freight board, which had been gradually losing members during the Durkan administration as terms expired and went unfilled, did not have the most collaborative relationship with the other modal advisory boards, which include the bicycle, transit, and pedestrian advisory boards . Unlike those boards which meet on a weekday evening, the freight board meets at 9:00am during the middle of the week. On top of the siloing of the boards, this has led to the freight board developing somewhat of an adversarial relationship with the other board when it comes to many projects.

For years, a few voices have dominated Seattle’s freight board. Warren Aakervik, the retired former owner and president of Ballard Oil, whose last term expired earlier this year, had been representing a slice of freight interests on the board since it was created in 2010. That’s a big contrast to the other boards where the longest serving members only remained on their respective boards for a few terms, with the ability to decline to renew a member often serving to make a political point. 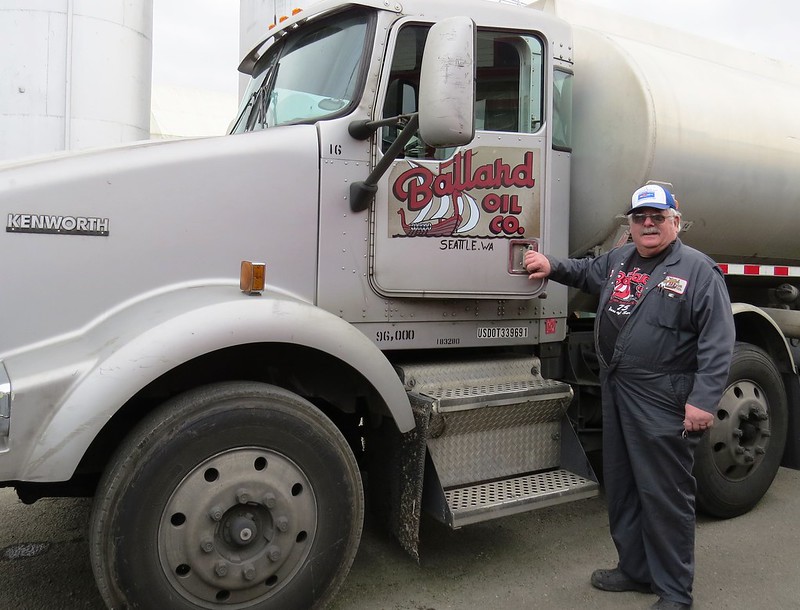 Warren Aakervik, who had served on the freight advisory board since it was created in 2010 as he has been an outspoken critic of the completion of the Burke Gilman Missing Link, will depart the freight board as a new slate takes over. (Photo: SDOT)

Aakervik has been an outspoken opponent of Seattle’s plan to complete the Burke Gilman’s “Missing Link” on Shilshole Avenue NW. Ballard Oil has not been a direct party in the appeal of the short segment of planned trail, but has been represented by the North Seattle Industrial Association (NSIA), which has been. The NSIA has also been leading the charge to stop another multimodal project, the Route 40 Transit-Plus Multimodal Corridor, which would add bus only lanes to segments of Leary Way NW and Westlake Avenue N. NSIA’s president, Eugene Wasserman, has been another outspoken opponent of things like Seattle’s 2014 Bicycle Master Plan and the 2015 Move Seattle levy.

But Aakervik’s departure will not leave the board without ties to a Missing Link appellant. CSR Marine, one of the members of the Ballard Coalition directly appealing the SEPA determination on the trail completion project, will be represented on the new iteration of the board by Nigel Barron. Barron has worked at CSR Marine since 2005. At Tuesday’s committee meeting, Councilmember Dan Strauss popped into council chambers to directly address Barron, referencing the unique challenges CSR faces operating a boatyard in the middle of a growing city. During his campaign for council in 2019, Strauss did not favor completing the Burke Gilman on Shilshole, instead favoring the Leary Way alignment that has been proposed by many of the project appellants. In office, he has primarily stayed clear of the issue as SDOT proposed a new design for the project intended to minimize future appeals.

Here is the full slate of new members joining the freight board:

Improving freight mobility in Seattle as a distinct goal from improving general purpose traffic will be critical in the decades ahead. The Washington Department of Transportation, in its draft statewide freight plan being finalized right now, identified the top five bottlenecks to freight movement in Washington that aren’t part of the national highway system. All five of them were in Seattle, with the Mercer Street corridor at number four. Mercer Street’s placement on the list comes after an expansion of the corridor at a full cost of over $250 million dollars, illustrating the problem that comes with expanding roads to improve freight mobility without specific priority given to freight.

The top five non-highway routes in Washington for truck delays are in Seattle, illustrating the gains that could come with prioritizing freight mobility in the city. (WSDOT)

Earlier this month, the Executive General Manager in Bruce Harrell’s office, Adiam Emery, appeared at the bicycle advisory board and emphasized a belief that freight mobility had been neglected by previous administrations and that the Harrell Administration would be taking steps to correct that, stating they ‘d be seeking a more “well-rounded” transportation policy. It remains to be seen how this will play out in practice.

Seattle has been moving forward with the idea of ​​providing dedicated space for freight vehicles, as well as allowing freight vehicles to use bus-only lanes. In contrast with the other modal boards, the freight board has often spent much of its time advocating to preserve the city’s existing use of street space. The board spent several months pushing back on a very short segment of protected bike lane on West Marginal Way, creating mock-ups of the planned street configuration that were inaccurate before SDOT could provide accurate information.

With an entire array of new voices taking over the helm at one of the most visible avenues for freight advocacy in the city, we’ll be watching to see whether new opportunities to collaborate with the other multimodal advocacy boards to improve loading zones, create space for freight, and reduce freight emissions can be created.

Ryan Packer lives in the Summit Slope neighborhood of Capitol Hill and has been writing for the The Urbanist since 2015. They report on multimodal transportation issues, #VisionZero, preservation, and local politics. They believe in using Seattle’s history to help attain the vibrant, diverse city that we all wish to inhabit. Ryan’s writing has appeared in Capitol Hill Seattle Blog, Bike Portland, and Seattle Bike Blog, where they also did a four-month stint as temporary editor.