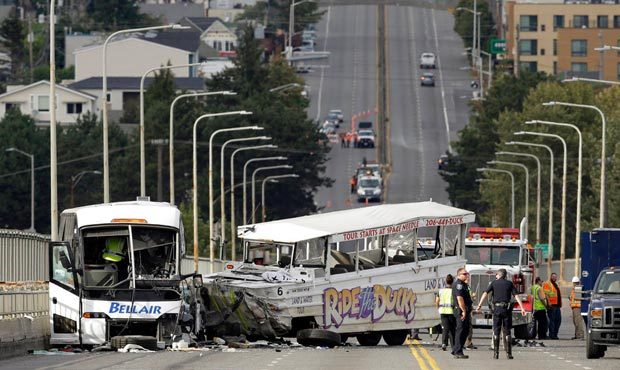 A tour bus on the right and a chartered passenger bus on the left remain on Aurora Ave. Bridge after a fatal accident in Seattle on Thursday, September 24, 2015. (AP Photo / Ted S. Warren)

The Aurora Bridge is getting new vertical posts to improve safety and increase centerline visibility.

The Seattle Department of Transportation says the expansion is temporary while it monitors traffic speeds, traffic volume trends, and safety data along the bridge. It will take a year to study the impact of the posts and consider major, long-term safety improvements.

The Aurora Bridge was built in 1932. In February 2011, a eight foot fence was installed along the bridge to prevent people from jumping off the span. This project cost approximately $ 4 million to design and build.

In September 2015, a Ride the Ducks vehicle and a charter bus collided on the bridge, killing four people and injuring at least 50 others.

Two middle lanes of the bridge were closed from late Friday evening to early Saturday morning while crews marked the locations where the posts would be installed. Four lanes of the bridge will be closed from Friday, June 11 at 10 p.m. to Saturday, June 12 at 6 a.m. in order to install the posts. One lane remains free in both directions. The closure coincides with the closure of the SR 99 tunnel for routine maintenance.

According to Seattle DOT, the new vertical posts are part of a larger plan to investigate security improvements across SR 99 Aurora Ave. N corridor. SDOT and the Washington State Department of Transportation are partnering with $ 2 million to make the freeway safer for pedestrians, cyclists, and motorists.

Senator Reuven Carlyle campaigned for the effort in Olympia.

“I am thrilled that our community has secured this high quality, targeted public investment in security in this year’s state budget,” Senator Carlyle said in a press release. “Following the 2015 Aurora Bridge tragedy and a tragic continuation of fatal accidents on the Aurora Corridor, the city of Seattle and the state share a public and moral obligation to improve public safety on our iconic bridge.”

Summerfair painting a portrait of the new normal