Sammamish, a Seattle Suburb Close to the City, yet Immersed in Nature

Perched on a plateau hugging its namesake lake, Sammamish is a small city in Washington’s Puget Sound region located 30 minutes east of Seattle and 10 minutes from Bellevue, one of King County’s most prominent suburbs. Sammamish has garnered a flurry of chatter in the past few years because it ranked number one in 2020 and 2021 on WalletHub’s Best Small Cities in the US list. That recognition, combined with a coveted location and an idyllic setting, has only increased the town’s popularity.

The city is in high demand due to its exceptional quality of life, particularly for outdoor enthusiasts, explained Adriano Tori, founder and CEO of RexMont Real Estate in Greater Seattle. “From outstanding golf courses to unparalleled bird watching, this area is ideal for people who love the serenity of the outdoors,” he said.

Easy access to nature, favorable safety ratings and excellent schools, not to mention the town’s proximity to Seattle and Bellevue, indicate that Sammamish has become one of Washington’s most desirable places to call home.

Lake Sammamish curves along the city’s western flank, with Bellevue sitting west across the lake, and Issaquah, a smaller suburb, floating along the southern border. Redmond––the headquarters of Microsoft and Nintendo––lies to the northwest, with the Snoqualmie Valley, a region known for farms, timber and charming small towns, hovering to the southeast.

The Council for Community and Economic Research reported that the cost of living in Sammamish is more than 150% of the US national average. Much of that cost is attributed to housing.

While condos and townhomes can sell in the $400,000 or $500,000 range, the median home price hovered around $1.475 million in February 2022 for single-family houses, according to Movoto.com. Meanwhile, the upper echelon of Sammamish homes can cost several million dollars or more, with some exceeding the $5 million mark. Waterfront properties tend to command the highest prices.

A 4,470 square foot, five-bedroom, five-bath residence in Chestnut Estates–a luxury neighborhood with 38 homes–offers a chef’s kitchen and extensive millwork. This property was recently listed for $3,198 million. On the lower end, a two-bedroom, two-bath condo with a fireplace and one-car garage priced at $499,000. And on the top end, a lakefront property sold for a record-breaking $12.75 million in February 2022. Real estate this year is up significantly from 2021, when the median price was $1.205 million.

Most homes in Sammamish are large, single-family houses on generous-size lots, with condominiums and townhomes rounding out the inventory. Single-family listings typically feature several bedrooms and bathrooms and myriad amenities, making the residences ideal for family life. Realtor.com currently shows 125 single-family residences, 20 condos and two townhouses on the market in Sammamish.

Architectural styles range from modern bungalows to sleek contemporary retreats and everything in between.

New construction homes are sprouting up around Sammamish regularly. These, too, are geared toward wealthy buyers. Windsor Grove, a Toll Brothers community, features 30 luxury open-concept houses in the heart of Sammamish. And Kensington Enclave, a development by home builder Murray Franklyn, offers 43 high-end homes minutes from Sammamish town center.

Mr. Tori said Sammamish is a “bustling area thriving with excitement.” But like any desirable place to live, higher prices are par for the course. “It is a very difficult market to break into now, and homes are regularly going above the asking price,” he said.

The pandemic has not only inflated the town’s housing prices, but diminished the offerings while shortening the time it takes to sell. “In the last two years, the market in Sammamish has been defined by low inventory,” added John Manning, managing broker at RE/MAX on Market. “Homes almost all sell within five days of hitting the market.” 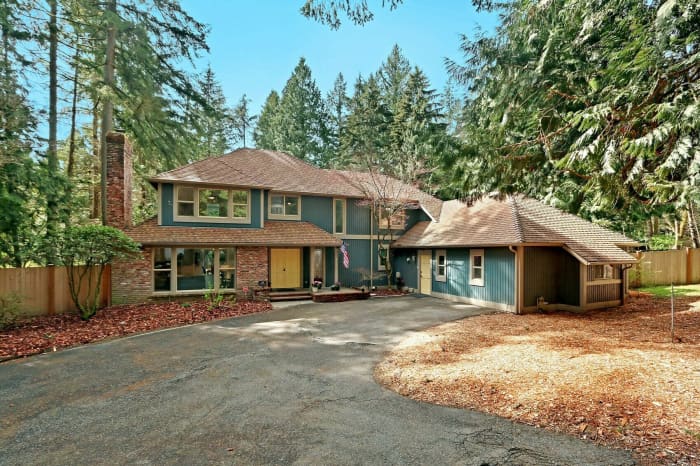 This fully-remodeled, five-bedroom home in Sammamish, Washington, is currently asking for $2.57 million.

What Makes It Unique

Mr Manning explained how the city has transformed since the 1990s when affluent tech workers flocked to the area. “Initially seen as a more affordable satellite to Bellevue and Redmond, Sammamish is now its own highly sought after destination,” he said.

There’s no doubt that the setting is much of the draw. “Perhaps more than anything, the lake is what makes Sammamish unique,” Mr. Manning noted. “At more than a mile wide, the lake bounds Sammamish to the west.”

Plus, Sammamish has more than 6,000 acres of tree canopy. Marked by hillside meadows, forests and wetlands, the area between Lake Sammamish and Snoqualmie Valley provides a unique outdoor lifestyle, Mr. Tori said.

The location, less than 20 miles from Seattle, is close enough to reap the benefits of the city’s diverse culinary and cultural offerings without having an address in Seattle proper.

On the culinary side, Metropolitan Market has an outpost in Sammamish. The Pacific Northwest chain is a full-service supermarket and butcher selling standard groceries, locally produced foods and organic and gourmet items. While the area isn’t saturated with independently-owned restaurants and bars, there are a handful of choices, including Sammamish Café & Spirits, Pine Lake Ale House and Tanoor, for delicious Lebanese fare. Just 10 minutes away, Bellevue provides many more dining options.

Some of the premier public schools in the state are in Sammamish, and for a reason families relocate to the area. Greatschools.org rates Skyline High School and Eastlake High School highly, with a score of 10/10. The marks for Sammamish elementary schools are also favorable. Rachel Carson Elementary School is rated the fourth-best in the state by Niche.com.

As of 2020, the number of people living in Sammamish was just over 67,000. The median age is 37.8 years old, and 71% of residents are married. Family units comprise much of the population.

Many residents have high-paying positions. As many as 40% hold a bachelor’s degree and nearly 35% have attained a postgraduate degree. Since this area of ​​the state is a tech hub, especially Redmond––about 15 minutes from Sammamish––many folks have positions in information technology, with nearly as many working in management, followed by sales and finance. In 2019, The Seattle Times reported Sammamish as the nation’s richest city, with a median household income of $183,000.

US Congresswoman Kim Schrier and her family live in Sammamish.

The population is expanding rapidly. A once-quiet Seattle suburb, Sammamish is busier and noisier than days past; thus, the city will likely experience some growing pains as it evolves. Since the area is in high demand, home values ​​will likely remain stable. A sellers’ market will inevitably be smaller, meaning high prices, low inventory and little room for negotiating.

New condo developments bring the opportunity for more people to settle in Sammamish, and in less space.

“Multi-family housing allows for higher population density, which makes for a far more exciting area to live and thrive in,” Mr. Tori explained. “But on the flip side, higher density can contribute to the exacerbation of infrastructure issues that some people are concerned about.”

Undoubtedly, Sammamish will have to adjust to accommodate an influx of new residents if the city plans to maintain its superior quality of life. Any region in the midst of a population boom must adapt its infrastructure to welcome more people, Mr. Tori said. “That is what we’re seeing in Sammamish.”

Click for more profiles of high-end neighborhoods around the world