Just hours after trading superstar wide receiver Tyreek Hill to the Miami Dolphins, the Kansas City Chiefs are rumored to be — at the minimum — interested in finding out more about other wideouts. Per Jack Settleman of Snapback Sports, the Chiefs (and the Green Bay Packers) have inquired about the availability of Seattle Seahawks standouts DK Metcalf and Tyler Lockett.

Settleman adds that the Seahawks are “opening to listening to offers” for their pair of stud wide receivers. The team is coming off a disappointing 7-10 season that also saw quarterback Russell Wilson suffer a hand injury that sidelined him for weeks. Upon his return, the team never quite got back on track and fell well short of the playoff push it had its eyes on. Wilson is now a member of the Denver Broncos after being traded earlier in the offseason as of right now, Metcalf and Lockett are projected to catch passes from Drew Lock in 2022.

Metcalf, who turned heads with his stellar 2019 NFL Combine performance, is set to enter the final year of his rookie contract. He’s in line to receive a very sizable extension in the near future as a result, which is well deserved. In three years as a Seahawk, the former Ole Miss star has recorded 216 receptions for 3,170 yards and 29 touchdowns in 49 games. Despite falling to the end of the second round of the 2019 NFL Draft due to injury concerns, he’s played in every possible regular-season game for the team thus far.

In a conflicting rumor, Matt Verderame of FanSided reports that the Chiefs have not inquired about Lockett or Metcalf. “Doesn’t mean it can’t happen, but hasn’t as of now,” he added.

What would Lockett and/or Metcalf bring to the Chiefs’ offense? 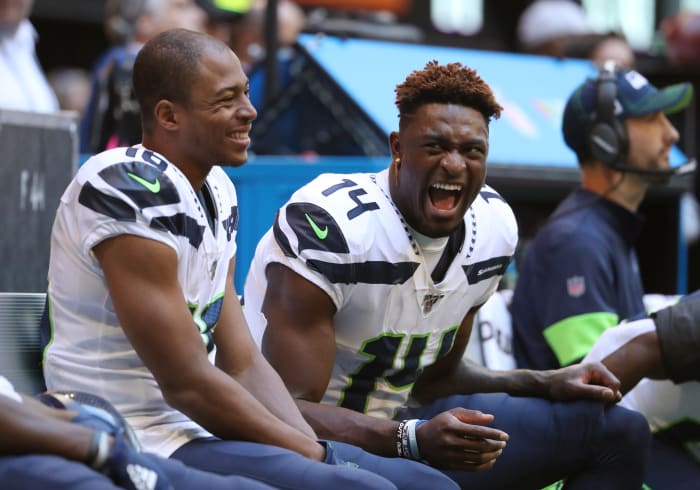 If the Chiefs indeed have inquired about Lockett and Metcalf and were able to swing trading for either of them, they’d be getting a quality receiving option for their offense. The free agent signing of JuJu Smith-Schuster certainly helps but at the end of the day, without Hill in the picture, more work needs to be done. Both Lockett and Metcalf would be immediate starters in Kansas City, and fairly easily the best receivers on the team as it’s currently constructed.

Lockett is a smaller wideout, but he thrives on being a security blanket. Countless Wilson deep balls were thrown to him, and he’s cemented his status as a premier threat at multiple levels of the field. Lockett is a trusted veteran who would instantly become one of Patrick Mahomes’ favorite targets. Metcalf, on the other hand, is an athletic freak of nature who wins in one-on-one situations largely due to his impressive frame and top-end speed. He’s a little more limited in the things he can do, but he’s a walking mismatch against just about any defensive back in the NFL nonetheless.

It remains to be seen whether the Chiefs are actually interested in acquiring Lockett or Metcalf’s services. The fits are imperfect, and Metcalf’s imminent extension would serve as a step back considering Kansas City just traded Hill. With that said, neither player is a slouch and both would be welcomed additions to the Chiefs’ high-octane offense. Time will tell if a change of scenery is in the plans for either Seahawks star, along with if the Chiefs make a move.