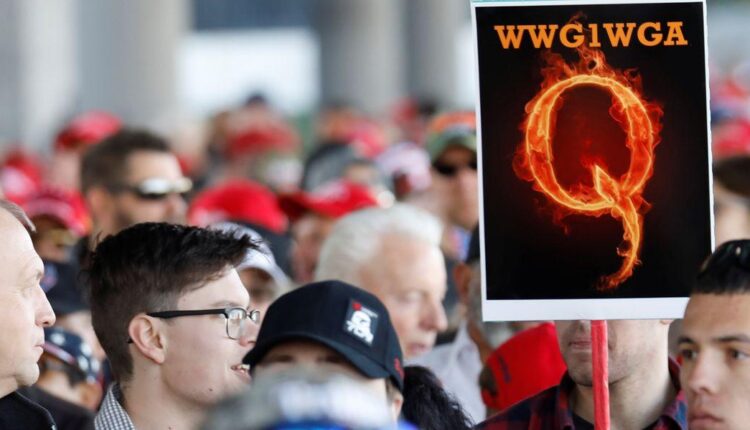 QAnon believers and other conspiracy theorists have flooded a Chicago hospital with threats after a prominent COVID-19 denier seeking treatment for the disease died Monday.

Veronica Wolski, 64, was known in the Chicago area for spreading anti-vaccine and pro-QAnon messages through large banners in high-traffic areas.

She became a political lightning rod in conspiracy circles after contracting COVID-19 and suffering complications. Her supporters loudly urged the Resurrection Medical Center to treat her with ivermectin, a drug commonly used to de-worm farm animals. The drug has some uses in humans but is not approved for the treatment of COVID-19 (federal health officials actually advise against it).

Lin Wood – a far-right attorney who permanently banned Twitter earlier this year after predicting the execution of then-Vice President Mike Pence by firing squad – used Wolski’s hospital stay to boost his own advertising. He used social media to urge his followers to connect with hospital staff and treat Wolski with ivermectin.

Since then, hundreds of people have called the hospital and sent an email, according to NBC Chicago. Some have threatened violence.

In a post on Telegram following Wolski’s death, Wood told his followers they had a “responsibility” to stop and “go to war” “medical murders”. Hospital workers reportedly called the police in response to bomb threats.

A spokesman for the AMITA Health Medical Group confirmed that Wolski died early Monday but declined to elaborate on the nature of the calls the hospital received.

Similar scenes are playing out in hospitals across the country. Extremist groups attempt to agitate their supporters after efforts to force medical professionals to administer ivermectin fail.

In Vancouver, Washington, the leader of far-right group Patriot Prayer promised a “call to action” this week after failing to receive a court order that forced doctors at a local hospital to administer ivermectin to a COVID-19 patient.

The man, Rodger Gundersen, died on Sunday evening. The leader of Patriot Prayer posted on social media after his death, accusing Gundersen’s doctors of the murder.

“Hostility towards medical professionals has increased as more and more unvaccinated people, especially those with varying degrees of influence on anti-vaccine activism, are hospitalized and even die after contracting COVID-19,” Holt wrote in an E -Mail to HuffPost.

“Rather than grappling with their own irresponsible health decisions, these movements have instead claimed that they are accusing the health professionals who have tried to save their lives misconduct,” he said. “It is a terrible development that puts people in hospitals who are already sacrificing a lot to help as much as possible at risk.”

This article originally appeared on HuffPost and has been updated.