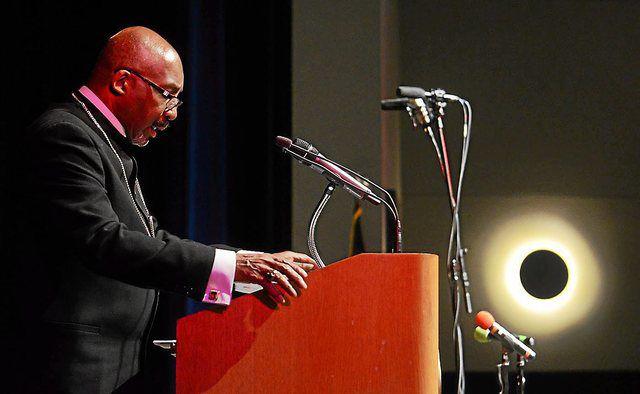 In addition to his pastoral position at Invictus, Debnam was the first vice president of the Pottstown Chapter of the NAACP and served as a chaplain for the Pottstown Police Department.

“He loved God. He loved his family. And he loved fellowship and fellowship leadership,” said his son Brian from Arizona on Saturday.

“That was his passion. And since he died, some people have contacted me and told me that they can call him at any time of the day if they are in a crisis, or if we have a loss or a challenge that night and he was.” there for you, “said Brian Debnam.

His father was born in Baltimore in 1953 to the late Leona and William Debnam. He attended schools in Baltimore and formed what may be the school’s first gospel choir while in Northwestern High School, said his son Brian.

Debnam was a musician and taught himself to play the piano and organ by ear. His son said he was also active in the Church as a young man and was an ordained deacon.

He served both as a Maryland State soldier and in a senior position in the Maryland Transit Authority before joining the Department.

Debnam was educated at Good Tidings in Baltimore and moved with his family to Pottstown in 1987 to take up his first pastoral position at the Second Baptist Church on North Adams Street.

After leaving that post, he founded Invictus Ministries and eventually led his congregation to purchase the former Lutheran Church of the Transfiguration on North Hanover Street.

Debnam was also named second presiding bishop of the Kingdom Connection Fellowship International. “He was very proud of that and spent a lot of time and attention on it,” said his son.

The NAACP’s Pottstown chapter published a message that read: “We mourn our beloved First Vice President and brother, Bishop Everett Debnam. He was a dedicated ministering leader for our branch and ward until the end. good effort ‘and finished the race faithfully. “

The Pottstown Ministry has also circulated a resolution on Debnam’s death. It reads in part: “We are deeply saddened by the death of Bishop Everett C. Debnam, greatly missed but never forgotten.”

Bishop Everett DEbnam, second from left, was a member of the NAACP’s Pottstown Chapter who participated in a Phoenixville Equality Rally to show their support.

The resolution also states: “We hug the entire Debnam family and Invictus Ministries and offer our prayers and help in the coming days.”

Brian Debnam said two of his fondest memories were when his father baptized him at the age of 8 and officiated at his wedding to his wife LaShun in 2000.

Bishop Everett Debnam speaks from a distance during a Martin Luther King event dedicated to his recovery.

“He was a giver and people remember him, and his sense of humor; his one-liners and his signature belly laugh, his head tilted slightly back and his shoulders trembling,” recalled Brian.

Services for Debnam are carried out over two days.

On Thursday, September 9th, a local and traditional homecoming ceremony will take place at the Heart of God Family Worship Center, 201 N. Hannover St. in Pottstown. The public viewing takes place from 11 a.m. to 4 p.m., with a public service at 4 p.m.

A national homecoming ceremony will be held at the Heart of God on Friday, September 10th. The public viewing takes place from 8 a.m. to 10 a.m., with a service at 10 a.m.

Bishop Jerome H. Ross Sr. will be the presiding prelate.

Instead of flowers, the Debnam family asked for a monetary donation to Invictus Ministries Inc.