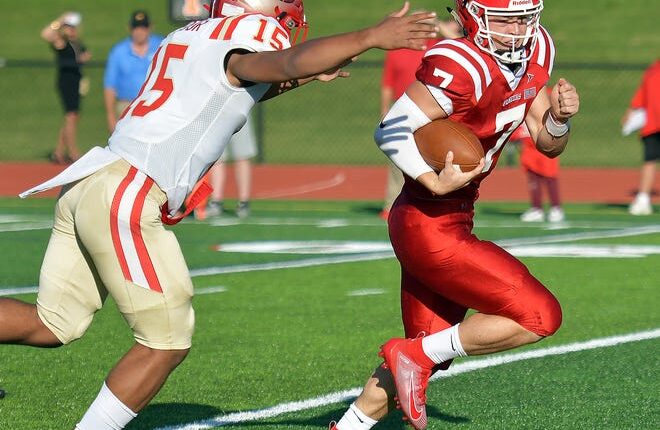 St. John’s 95-year Thanksgiving football rivalry with St. Peter-Marian officially ended earlier this year, and for the past several months St. John’s Sporting Director Michael Mead has worked tirelessly to give the Pioneers a new Turkey Day opponent can be found from this season’s schedule.

On Wednesday, St. John’s and Everett announced their 2021 vacation matchup. The pioneers travel to Everett on November 25th at 10 a.m.

“It’s a one-year deal right now,” Mead said. “We’re going to re-evaluate it, but the main goal, and Coach (John) Andreoli and I were talking about it, was to find an opportunity for the kids to play on Thanksgiving, and this provides that opportunity.”

St. John’s-St. The Peter Marian Rivalry, the longest running rivalry between Catholic schools in the United States, began in 1925 (against St. Peter’s). St. John’s and SPM played for the last time in 2019.

In 2020, St. Peter-Marian and Holy Name merged to become St. Paul, and the Saints agreed to start a Thanksgiving series with St. Bernard that year.

Everett, an eternal powerhouse who won 12 Super Bowl / State Championships in Division 1 from 1997 to 2017, was also looking for a Thanksgiving opponent.

“First we both looked for geographic opponents,” said Mead. “There was a slight delay. Then I just asked again. We both hadn’t found anyone, so it worked out that both schools were open and we’re looking forward to it. “

Everett didn’t act on Thanksgiving for four years until he started a series with Masconomet that lasted until 2019.

The Pioneers, who will officially join the Catholic Conference this fall, last played against Everett in 2019.

St. John’s traditionally played its Thanksgiving game at Fitton Field in Worcester, so fans will have to travel a little further this fall.

“We have a good following,” Mead said, “and I think they will all make the trip.”

The White House Says Boosters for All. Here’s What You Need to Know.