Out in the City: Two Dollar Cruise in Downtown Spokane 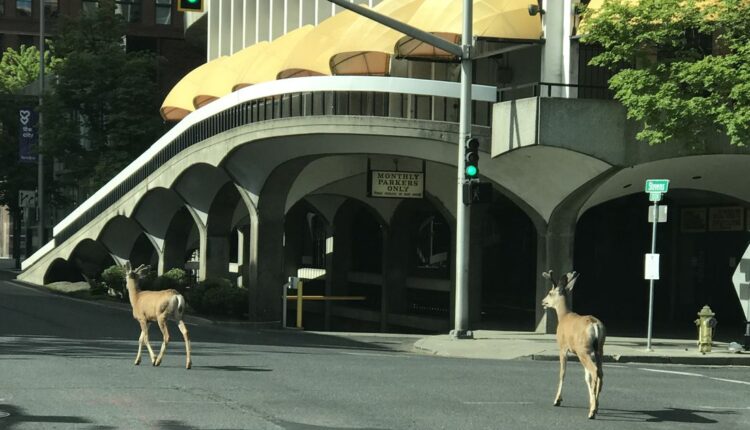 When Rick Singer drove to work on Tuesday, he came across an unusual sight.

Two dollars, velvet-covered antlers, next to each other near the corner of Stevens Street and Main Ave.

Singer, who owns a photography studio near the intersection of Main and Washington Avenues, stopped his car and picked himself up to grab the nearest camera, his iPhone.

“I don’t think I’ve ever seen a deer on the street,” he said. “I immediately felt very bad for her. They are so out of place and they moved away from the park. “

This is how he took the unusual photo.

“It’s not uncommon for them to find their way downtown,” said Kile Westerman, a wildlife conflict specialist for the Washington Department of Fish and Wildlife. “It happens occasionally (although) it is rather rare.”

Westerman said it is possible the two dollars came from the Peaceful Valley, where there is easy access to water and green space. Or maybe they were coming down from South Hill. In either case, they were looking for food. During spring and summer, the males usually travel together while the females raise the fawns.

Even in a specific port like downtown, there is still plenty to eat, including all the ornamental plants given out by companies, he said.

Westerman, who handles all human-animal conflicts in the Spokane area, said he had received a few calls about the money but hadn’t heard anything since yesterday, which is a good sign. In general, WDFW is not calming down and removing deer wandering downtown, but hoping that they will find their way back to more suitable environments.

The dark side of the whole encounter is that deer and other wild animals are often drawn into urban or semi-urban settings by foods given out by nature-loving people, Westerman said.

He urged people not to feed any wild animals, no matter how cool the photo is.

If you’re vaccinated, can you still spread COVID19?