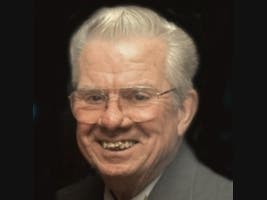 He was the loving husband of Lorraine (Nuzzo) Bailey.

He was born on January 3, 1931 in New Haven to the late Everett Palmer Bailey and Edna (Clough) Bailey. He was a US Navy veteran of the Korean Conflict who served on the USS Brownson.

He worked as a commercial electrician at Koppers Coke until it closed in 1967 and then worked for Tilcon of North Branford until his retirement in 1993. Everett was a member of the VFW and an active parishioner of St. John’s Episcopal Church in Yalesville.

Everett loved his children and enjoyed spending time with them in their respective summer homes.

He leaves behind his 67-year-old wife, Lorraine; his daughter Elaine McDunnah and her husband Jeffery McDunnah; his son Mark Bailey and his wife Lynn (Ouellette) Bailey; his grandchildren, Jacqueline McDunnah, Jeannette McDunnah, Michelle (Bailey) Frear (Kevin) and Christopher Bailey (Lisa); his great-grandson, Luke Frear; his sister Anna Fiengo; and many nieces and nephews.

He was died by his sister Joan (Bailey) Onofrio.

Everett’s family would like to thank the nurses and doctors at Yale Neuro Science Intensive Care Unit for their excellent care.

His family will receive relatives and friends at the Wallingford Funeral Home, 809 N. Main St. Ext., On Saturday, November 20th, from 10am to 12pm.

Immediately after the reception hours, a funeral service with military honors takes place in the funeral home.

The burial will be carried out by the US Navy at sea. Souvenir gifts can be sent to the Wounded Warriors Project (https://support.woundedwarriorproject.org).