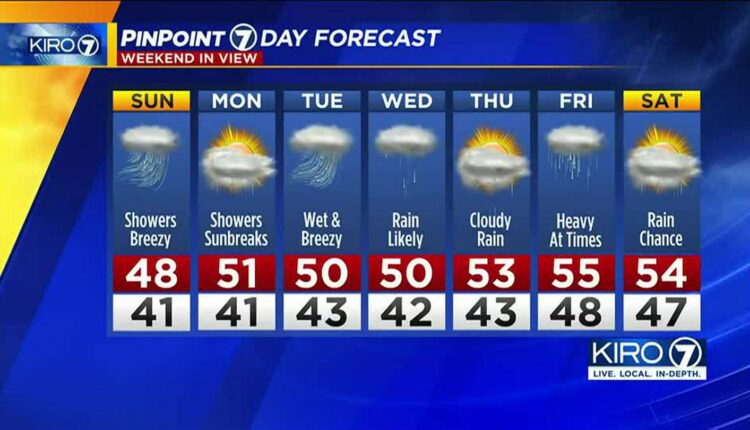 WESTERN WASHINGTON – After a strong weather system swept through West Washington on Saturday, bringing with it heavy rain and wind, there will be isolated showers and breezy winds on Sunday morning.

More rain is expected at times on Sunday, although it is not so windy.

The pass snow falls at times with a further one to ten centimeters possible. In the lowlands it gets cool with temperatures around 50.

Sunday is expected to be a little calmer after Saturday’s winds are expected to pick up a little bit stronger around Puget Sound and near the coast and further north.

Some areas around Puget Sound experienced power outages on Saturday afternoon. An outage occurred in Woodinville that affected customers due to failed power lines.

Puget Sound Energy also reported an outage in Poulsbo that affected more than 2,300 customers around 2 p.m.

In the mountains at Stevens Pass and Snoqualmie Pass there were snow spells of a few centimeters.

A winter weather warning has been put into effect for the Mount Baker and Mount Rainier areas until 6:00 p.m. on Sunday. Six to 18 inches of snow was predicted.

Monday: This could actually be a pretty calm day with some clouds and sunshine. But a couple of showers might be nearby.

Tuesday: Rain will likely return, and it will likely get pretty windy too. It doesn’t look like a major wind event at the moment, but we will be closely monitoring the forecast models for the next few days in case a low pressure center develops and west Washington approaches.

Mid-Week and Beyond: While it looked like we could dry out a bit, the forecast models are now pointing to persistently humid weather with intermittent rain. The risk of landslides from excessive rainfall will continue to increase.

God seeks to have purpose