The 2022 Oregon Active Transportation Summit hosted by The Street Trust kicked off online this morning and the featured speaker, Metro Council President Lynn Peterson, urged attendees to support three megaprojects currently being planned in the region — and all of them include wider freeways. 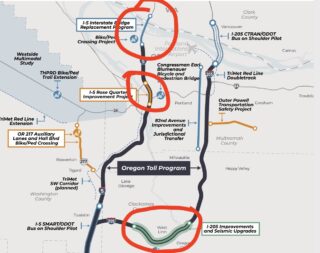 Peterson was speaking from Vancouver, Washington where she’s attending a work session as an Executive Steering Group member of the Interstate Bridge Replacement project, a joint effort of the Oregon and Washington departments of transportation to expand five miles of I-5 on both sides of the Columbia River.

That was one of three specific projects Peterson touched on in his keynote which was billed as a “state of transportation in the region” address.

Peterson has a long resume in the transportation field that goes back over 30 years — from being a traffic calming intern for the City of Portland in the mid 1990s, to stints with land use planning nonprofit 1000 Friends of Oregon and TriMet before getting into politics as a City of Lake Oswego councilor in the early 2000s. Her most recent government job prior to Metro was as Director of the Washington Department of Transportation (a job that ended in a brazenly political stunt by detractors of the governor who appointed her).

There were two major parts of her speech that caught my attention this morning.

First, she made a very compelling case for why ostensibly non-transportation issues are central to fixing our transportation issues. And second, she articulated why she thinks it’s time to support the I-5 Rose Quarter, Interstate Bridge Replacement, and I-205/Abernethy Bridge projects.

In a section of her speech where she said our region doesn’t have enough funding to address our mobility infrastructure needs, Peterson connected that “lack of resources” to the need for a regional funding bond measure and widespread safety fears. “Voters must feel safe in options before they vote to pay for them,” she said. Peterson focused primarily on concerns cited by many people (as many as 76% of people in the region according to one poll she cited) that they don’t feel safe riding transit — especially Black people and other communities of color. “We do not meet our climate goals without addressing these fears. We do not pass the transportation funding measure without addressing these fears,” she said.

“Voters must feel safe in options before they vote to pay for them.”
— Lynn Peterson, Metro Council President

Then Peterson said transportation advocates should use a much broader lens if they want to get their issues over the finish line. For Peterson we need to “restore the social contract” and take a holistic look at community health before there’s any space to address transportation challenges. She said as long as there’s economic injustice, housing instability, and fear of moving through our communities, the majority of people won’t be willing to change the transportation status quo.

Metro is doing its part by buying and restoring natural areas and parks throughout the region like Newell Creek Canyon and Chehalem Ridge Nature Park. Peterson likened these parks as part of Metro’s effort to “rebuild the foundation of Maslow’s hierarchy.” “If we want to be successful in funding our transportation priorities, we have to build the base of the pyramid first.”

Peterson also said progressive transportation activists will continue to be disappointed with progress unless they find ways to compromise with folks who disagree with them.

Citing a recent poll where people were asked if Metro should prioritize traffic relief investments that put climate change mitigation first, or whether they should do whatever it takes regardless of climate impacts, the result was split 45% to 45%. “And I remind you that we have to get to 50% for a ballot measure to pass,” Peterson said.

When it comes to the three regional megaprojects that include freeway expansions, Peterson expressed her support for moving them forward. After listing all three projects, she said, “You might hear this list and worry that the floodgates are opening for more driving. Know that we have a powerful tool at our disposal, one that I know can mitigate that concern: and that is congestion pricing.”

Peterson didn’t say in her speech this morning that she would oppose these projects if they didn’t include some type of toll or congestion pricing program first, but she has said that in the past. And whether ODOT ever actually launched a pricing program on their interstates remains uncertain (a Metro vote to implement tolls on the I-205 project was recently delayed).

What Peterson was clear on, however, was that she’s ready to say “yes” to these three projects and that people who oppose them are getting in the way.

“We can’t let ‘no’ get in the way of progress. Too many nos means Washington again pulls out of the I-5 bridge conversation… Too many nos drives up the cost of the Rose Quarter project making anything more than a bare-bones I-5 crossing infeasible. And too many nos makes it harder and harder to get a regional transportation funding measure passed.”

If a majority of the region can get to “yes,” Peterson believes the Interstate Bridge project can be “right-sized for how we want to live now and into the future and meets the Metro Council’s equity and climate goals,” and the I -5 Rose Quarter project can lead to a “Restored Albina neighborhood that doesn’t see Interstate 5 as a canyon but instead as an afterthought buried underneath the community.”

Another reason Peterson might have yeses and nos on her mind is that voters will face the same decision about her bid for another term as Metro president when ballots arrive next month.

Jonathan Maus is BikePortland’s editor, publisher and founder. Contact him at @jonathan_maus on Twitter, via email at [email protected], or phone/text at 503-706-8804. Also, if you read and appreciate this site, please become a supporter.