Kiwi Farms: What to Know About the Hate-Filled Message Forum Dropped by Cloudflare

Internet infrastructure company Cloudflare said on Sept. 3 it blocked Kiwi Farms, a message board known for organizing harassment campaigns. Cloudflare cited an “unprecedented emergency and immediate threat to human life” as the reason for its actions.

The message that appears when visiting Kiwi Farms.

“The rhetoric on the Kiwifarms site and specific, targeted threats have escalated over the last 48 hours to the point that we believe there is an unprecedented emergency and immediate threat to human life unlike we have previously seen from Kiwifarms or any other customer before,” Matthew Prince, Cloudflare CEO and co-founder, said in a blog post.

Attempts to visit Kiwi Farms are now met with a message that says the site is blocked and directs people to the blog post from Cloudflare.

Kiwi Farms didn’t respond to a request for comment about the site being blocked.

What is Kiwi Farms?

Kiwi Farms is a hate-filled message forum that started as an offshoot of 4chan, the infamous anonymous image board. It was initially called “the CWCki” when it began around 2007 and at the time was dedicated to the harassment of a single online personality, according to a New York Magazine article from 2016. The forum switched its name to Kiwi Farms in 2014.

“Kiwi Farms has been the locus of numerous mass harassment campaigns, some of which have ended in doxing or swatting or even in the target committing suicide,” said Daniel Kelly, director of strategy and operations at the ADL’s Center for Technology and Society.

Doxxing is when a person’s private information, such as their address and phone number, is posted online without their permission. Swatting involves fake calls made to the police that can lead to an armed response at a targeted person’s home.

Posts on Kiwi Farms frequently target members of the LGBTQ community, specifically transgender people. At least three people have died by suicide after harassment campaigns tied to Kiwi Farms, according to The Washington Post.

Kiwi Farms also had ties to the Christchurch mass shooter, who in 2019 killed 51 people at two New Zealand mosques and has since been blocked in that country.

Why has there been pressure to #DropKiwiFarms?

The move by Cloudflare comes after growing pressure over the past month from a campaign that sought to get the internet company to stop providing services to Kiwi Farms. The #DropKiwiFarms campaign was started by Clara “Keffals” Sorrenti, a transgender Canadian Twitch streamer.

Sorrenti said she started the campaign after being targeted by people using Kiwi Farms, including repeated doxxing and swatting incidents.

The #DropKiwiFarms site contains information about the forums, provides steps for contacting Cloudflare and shares stories of victims who have been targeted by people using the forum.

Last month, Rep. Majorie Taylor Greene, a Republican from Georgia, said in an interview with Newsmax that she was swatted twice in August. Greene pointed to Kiwi Farms as the culprit and called for the site to be taken down.

Cloudflare initially resisted taking action against Kiwi Farms, with Prince saying in an Aug. 31 blog post that “such choices make it more difficult to protect content that supports oppressed and marginalized voices against attack.”

However, the company changed course days later. Prince said his company could no longer wait for law enforcement to act. In the blog post, he says Cloudflare reached out to law enforcement multiple times in the past two weeks for what is believed to be potential criminal acts and imminent threats to human life.

We just blocked Kiwifarms. The threats on the site escalated enough in the last 48 hours that, in spite of proactively working with law enforcement, it became enough of an imminent emergency we could no longer wait for them to act. Details of our decision: https://t.co/xNnSXn65R6

Prince said the decision to block Kiwi Farms wasn’t in response to the pressure campaign.

#DropKiwiFarms released a statement on the same day in response to Cloudflare’s action, saying it’s happy with the decision but doesn’t want to rest on its laurels.

“This deals a big blow to Kiwi Farms and their community, one they may never recover from,” the statement said. “We have shown that when united together we are capable of moving mountains, and if we continue to stand together and fight back, we can see this until the end.”

Kiwi Farms founder Josh Moon said on Sept. 5 via Telegram, “I do not see a situation where the Kiwi Farms is simply allowed to operate.”

In his post, Moon said Cloudflare provided both domain registration for the site and protection from distributed denial of service attacks. While he can transfer the domain for Kiwi Farms to another company, Moon said he doesn’t have faith in any other companies. As for DDoS protection, Russian internet infrastructure company DDoS-Guard was his backup, but at the time of his post, the company dropped Kiwi Farms from its services. Cloudflare isn’t the only provider of DDoS protection services, but it is one of the few companies to host sites with such content.

Sorrenti tweeted on Sept. 6 that Kiwi Farms went online briefly using a Chinese domain, but it went down once again.

Kiwi Farms tried once again to go online, this time using a Chinese domain. Now the servers cannot even be reached. When I said it is dead, I meant it. They will continue to stay on life support jumping domain to domain with a worse iteration of the site each time. we won pic.twitter.com/wosiM3xA02

Jim Watkins, the owner of the anonymous image message board 8chan, now known as 8kun, helped Moon bring Kiwi Farms back online days after its takedown, according to Vice. The forum is hardly functional, and VanwaTech, an internet services company based in Vancouver, Washington, is providing security and domain services for Kiwi Farms. VanwaTech provided similar services for 8kun, and Watkins is involved with the company, according to Vice.

On Sept. 18 in a post on Telegram, Moon said Kiwi Farms was hacked. The website’s URL now shows a message about the hack.

“I do not know for sure if any user information was leaked,” he said in the statement. “In my access logs, they attempted to download all user records at once. This caused an error and no output was returned. I shut everything off soon after. If they scraped information through some other mechanism, I cannot say with any confidence either way .”

Moon said the site will be restored from a backup, but it will not happen immediately. 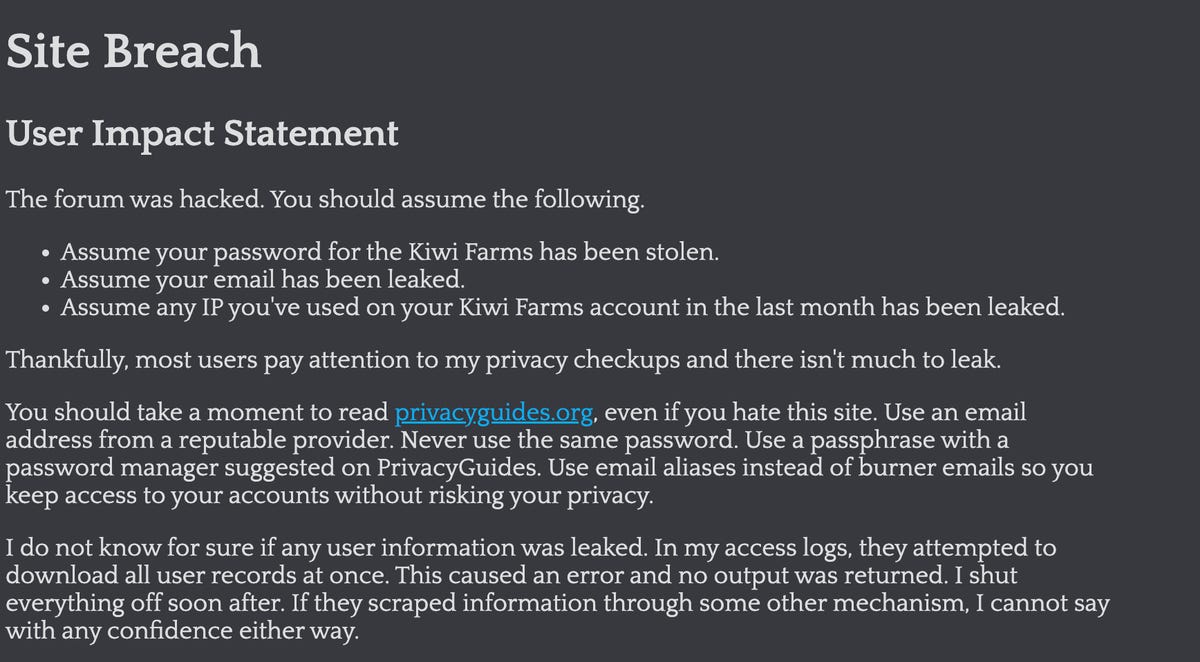 Part of the statement found on Kiwi Farms.

Before Kiwi Farms’ blocking, Neo-Nazi forum Stormfront and 8chan were both dropped from Cloudflare in 2019 and 2017, respectively. Both sites eventually did come back online after finding new providers, but they went offline earlier this month. They are also supported by VanwaTech, according to Vice.