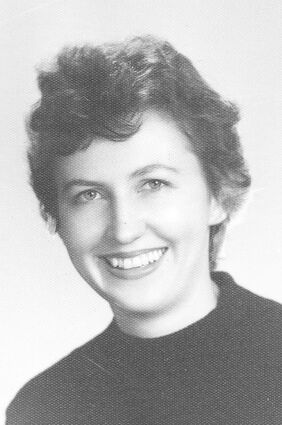 Jacquey Ostervold, 86, died on Saturday evening, November 6th, with her family at home. She was born on May 15, 1935 in Kellogg, Idaho, to Jackson and Louise Keppner Greenough. A graduate of Butte High School, she attended the college of the Montana School of Mines, Butte Montana, and earned her teaching degree at the University of Montana, Missoula. She continued her studies with a thesis at the University of Washington.

Shortly after Jacquey’s birth, her family’s kitten died from ingestion of arsenic particles from the local hut that had perched on the grass in her front yard. That prompted her family to move from Kellogg, Idaho, to Butte, Montana, where her father, a metallurgy engineer, worked for the Anaconda Copper Company. The following year, Jacquey’s brother Robert Keppner Greenough was born. Jacquey and Robert grew up in Butte during the Great Depression. From that time on, she appreciated the smallest things like visiting her grandfather’s little grocery store, his tiny woodworking workshop in the basement and the beautiful sound of the songs he whistled, as well as her mother’s beautiful flower garden. She also had fond memories of the time she spent at Winchester House in the Pines, which later became her family’s log cabin in the Helena National Forest.

In 1953, after graduating from Butte High School, Jacquey attended the Montana School of Mines in her hometown of Butte, MT. In 1955 she moved to Missoula to complete her studies at the University of Montana. During her time at U of M, she joined the Sigma Kappa Sisterhood. During her studies, she enjoyed English, history and acting, and participated in numerous plays. Towards the end of her studies, she met Mr. Julius Wendt, who was visiting the university in search of new teachers. She accepted Mr. Wendt’s offer, and her grandfather drove her to Cathlamet, Washington, to begin her career as a high school teacher at the old two-story Wahkiakum High School. Miss Greenough taught English and history and directed numerous plays in the gym. She wasn’t much older than some of her students, but she enjoyed working with them.

In a 1959 WHS basketball pep rally, Charles Lloyd Ostervold was swept away by the beautiful Miss Greenough, and the following November they were married at St. Catherine’s Church in Cathlamet. They lived in a small raft house that they had pulled up on their farm. They lived there when they had their first child, Mary Ann. Soon after, they had a third child, Charles Lloyd, whom they named Chip, and a third child, Valerie, a few years later. When they welcomed another daughter, Kathryn-Kari, it got a bit cozy in their little swimmer house. In order to have more space for their growing family, they built the swimming house and built a large house underneath and around it. Their fifth child, Margaret, was born a few years later. During this time, Jacquey was busy looking after her children and helping out on the family farm. She was a member of the St. James Episcopal Church. She was the co-leader of Girl Scout Troop # 21 for ten years. She and Lloyd loved meeting friends for dinner and a game of pinochle. When summer came there was always a family trip to the Montana cabin that brought the opportunity to hang out with her parents. Jacquey enjoyed keeping in touch with the many relatives she and Lloyd shared.

In the early 1980s, Jacquey resumed her teaching career. She was employed at ESD 112 in Vancouver, Washington. This time she worked with preschoolers. Some days she was in the classroom in Ilwaco and other days she made house calls between Ilwaco, Castle Rock and Kalama to work with her young students. Finally, she switched to the Julius-A-Wendt primary school in Cathlamet as an employee. As an educator, she saw the need for a childcare facility in Cathlamet. As a congregation, St. James Episcopal Church in Cathlamet had property that could be put to such use. She and her congregation worked with their archdiocese in Olympia to develop and realize the St. James Family Center, which opened in 1985. She retired from teaching in 2001 and left her many friends at school to have more time with family.

After 46 years of marriage, Lloyd died in June 2006. In addition to her husband Lloyd, her parents Jackson and Louise, her son Chip and her brother Robert preceded her in death.

A short family funeral will be held under the direction of Reverend Irene Martin. A memorial service with reception is planned and is expected on Sunday, May 15, 2022 (more to follow). Commemorative donations can be made to the St. James Family Center or the PeaceHealth Hospice. Arrangements are from Dowling Funeral Home of Cathlamet.