Opening a coffee shop in Seattle is like bringing coconuts to the beach, jokes David Orozco, the owner of Valentina’s Café, which opened quietly in Ballard in February. But despite the crowded field, the Seattle coffee scene has always lacked something he desperately missed from Mexico’s urban landscapes: the morning drinks scene, with juice vendors squeezing fresh oranges, stands steaming tamales, and cafes selling coffee drinks made from Mexican beans.

Mexican coffee — in culture or product — is hard to find and underappreciated in Seattle. But with the opening of Valentina’s and Maíz, two passionate entrepreneurs are showing the city the wide spectrum of what Mexican coffee can be and helping to build an appetite for it among Seattle’s coffee drinkers.

Beacon Hill’s Cafetal Quilombo started offering Mexican-style coffee in 2015, . Owners Heri Magdalena and Maria De Luna had a tortilleria in Mexico, and Magdalena worked for Uptown Espresso (now part of Fonté Coffee Roasters, whose beans they use) as an equipment repairman. But the two struggled to find customers for the budding genre in Seattle until they loosened their focus and added food — tamales that De Luna makes from scratch for the café.

“Here, everybody knows or thinks they know a lot about coffee,” says Orozco, but he found that wasn’t true when it came to Mexican coffee culture. “It’s time to do something unique.” Inspired by a cafe he visited in Mexico City, he realized he wanted to open something similar in Seattle: high-quality, well-sourced coffee, served the way they do it in Mexico.

The menu at Valentina’s cafe features single-origin beans from Mexico and single-origin Mexican chocolate from Mexican chocolate company Rey Amargo, from which baristas brew classic espresso drinks and specialties, like the habanero mocha and flor de Oaxaca (made with lavender syrup). A cold-press juicer churns out fresh green and orange juices. “Every place in Mexico, in the morning, you find fresh juice,” says Orozco. “And here, it’s almost impossible.” Photographs and art by Mexican artists hang on the walls, giving the room a distinctly modern, Mexican feel, despite having changed little since its previous life as a Caffe Fiore.

“Here, everybody knows or thinks they know a lot about coffee,” says Orozco, but he found that wasn’t true when it came to Mexican coffee culture. “It’s time to do something unique.”

Orozco had been eyeing the Valentina’s space, which once connected to his steakhouse next door, for almost the entire six years since Asadero Prime opened. When Caffe Fiore declared its pandemic shutdown a permanent closure in 2020, he was finally able to take over the space. It opened quickly so he could afford to start paying rent on the space, but in effect, the coffee shop, named for his daughter, lacks some of what he hopes to eventually offer. Currently, the food options include pastries from Macrina Bakery, empanadas from the Salvadorean Bakery, sweets from La Cherie, and cakes from Tres Lecheria. But these don’t complete his vision: staffing struggles have meant holding off on the simple, Norteño breakfast burritos he dreams of, and he has yet to find anyone to make the cafe conchas (soft, sugar-topped buns) or tamales to his standards.

At Maíz — a nixtamaleria that grinds heirloom corn for its antojitos (Mexican snacks) and tortillas — Aldo Góngora also wanted to bring a coffee culture from Mexico to Seattle, just a slightly different version that he experienced during his time in rural Northern Mexico. “When they have a fire, they have a coffee pot on the side,” he says. “The coffee is to warm up in the morning.” Since opening in November, Maiz has served Pike Place Market visitors Mexican-style coffee drinks and a menu of tacos, tostadas, tlacoyos, and tamales.

Among the drinks Maíz serves is café de olla, which the staff brews with cinnamon sticks, piloncillo (raw dark sugar), and single-origin chocolate. It smells strong and sweet, and the coffee may seem overpowered by the additional ingredients, but to those from or who have spent time in the country, it tastes like Mexico. “We know it’s not good for coffee to boil it,” Góngora says and laughs. “But this is how you find it in Mexico, people just having it all day.” 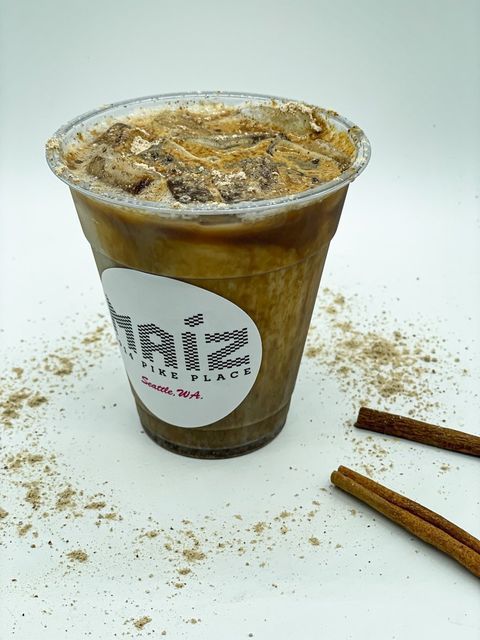 A horchata late with pinole — roasted corn, ground super-fine and mixed with cinnamon and agave — on top at Maíz in Pike Place Market. Courtesy of Maíz

Coffee has always been a passion for Góngora, especially since he started Sazon, his restaurant group that serves Mexican breakfasts and brunch. He uses the same coffee at Maíz as he has in those shops — Caffe Vita’s Del Sol, a medium-light blend from all over the world — but has aspirations to eventually bring in Mexican beans. “I have a small roaster,” he says. “I’ve been trying to bring it from my house in Mexico, but it’s spendy.”

At Valentina’s, Orozco is also contending with high prices: he uses single-origin beans from the SODO-based Fulcrum Roastery. He says he wants to bring traditional Mexican coffee culture to Seattle, using high-quality ingredients — even if that means he pays a little more. Fulcrum came to him with a fair-trade, organic bean from Oaxaca. The hand-picked beans come from Mixteca Alta del Pacifico, a cooperative of small farms in the Mixteca region, which Orozco’s team chose after extensive testing for flavor, but which they also liked for the ability to buy directly and get the money back to the farmers as much as possible.

In recent years, Mexico’s specialty coffee industry has grown, and that is slowly starting to show in the beans on offer in Seattle, which may someday make it easier for Mexican-style shops to use Mexican beans. Tanuki Roasters offered beans from the same cooperative as the ones Orozco sells as their January special, and one of the most popular blends at Seven Coffee Roasters is the Organic Santa Fe from Mexico. And while the food and the mission get the attention at Fremont’s Lazy Cow Bakery, where Lara de la Rosa turns out vegan baked goods in support of mutual aid organization La Casa del Xoloitzcuintle, the coffee comes from Mexico. “We will be serving the Zapatista coffee from @highergroundstradingco to help fund indigenous resistance and sovereignty in Chiapas,” the bakery announced on Instagram in early March.

“It’s growing, slowly but steadily,” says Orozco of Seattle’s Mexican-style coffee scene. But both he and Góngora are always looking for more places to bring in the flavors and traditions of their home country — Orozco dreams of adding raw milk to the menu, for the flavor, but so he can offer pajaretes, a farmer’s morning treat of milk directly from the cow, with chocolate, coffee, and a little tequila. At Maíz, Góngora experiments with tamer concoctions, adding pinole — roasted corn, ground super-fine and mixed with cinnamon and agave — to shots of espresso. “It gives it a sweet side, and the taste of the corn,” he says. Situated directly next door to the famous Starbucks in Pike Place, Maiz is careful to stay laser-focused on its mission, the same as Orozco’s: showing off the unique, wonderful aspects of Mexican coffee.

And for them both, it’s personal. “What I like to consume is what I like to sell to my customers,” Orozco says.

New Lilac Festival Brewfest to take over downtown Spokane in May