There are still many more questions than answers but we wanted to follow up on four shooting incidents in Everett, Washington from Friday through Sunday.

We asked Everett Police the following and received the answers from Public Information Officer Kerby Duncan.

Officers Duncan and Hamel work on getting details of the incident for a press release.

Friday morning Everett Police were called to reports of a woman shot at a home at 16th and State Streets in north Everett.

Q: What is the condition of the woman who was shot?

A: Last we heard she was stable at the hospital. We have not received an update today.

Q: Have you determined a connection between the homeowner and the woman who was shot?

A: They knew each other and she had been staying in his separated basement (note, they were not roommates, they did not have a relationship outside being an acquaintance from staying in his basement, and she did not have access or permission to enter the upper level of the house)

Q: Was the woman breaking into the home?

A: That is still under investigation

Q: Have there been any arrests, and do you anticipate asking the Prosecutor to file charges against either of the people involved?

A: No arrests have been made or are expected. Once the case is completed we will send it for prosecutors’ review for any charges. 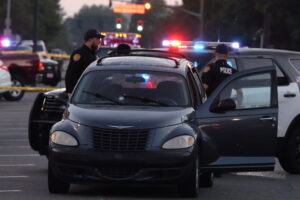 Officers photograph a car which had multiple bullet holes.

Saturday morning Everett Police were called after a man in his fifties was shot in downtown Everett.

Q: What is the condition of the man who was shot?

A: Last we have is he was transported with non-life-threatening injuries, no update yet.

Q: Have you developed a connection between the victim and whoever fire the shots?

A: We aren’t ready to release the relationship status yet.

Q: What is the status of the case?

A: Still early in the investigation and attempting to get more info from the victim.

Q: Can you advise if the victim is cooperating or provide other details on the case?

A: They were not cooperative during the incident, our detectives will be reaching out again to try and gather more info.

Two separate shooting incidents in Everett Sunday afternoon and evening. No injuries were reported in either of these cases.

Q: Is there a connection between the shooting in the 1100 block of Casino Road shortly after 5:00 PM and the later shooting at Jackson Park near 18th and State in north Everett? Both incidents had similar descriptions of two different red vehicles shooting at each other. There were no reported injuries

A: Our detectives noted the similar suspect vehicles and are looking into possible connections, but we aren’t ready to say for sure.

Editor’s note: If you have any information on the above cases you can provide that to Everett Police on their tip line at (425) 257-8450.