Once a sparsely populated region whose idyllic scenery lured artists from Winslow Homer to Jackson Pollack, the Hamptons in New York now ranks among the most expensive residential markets in the US

Prices have soared even higher during the pandemic, as New Yorkers fled the city and snapped up homes. A waterfront estate in the town of Water Mill hit the market in May for $72 million, an asking price that didn’t even set a record.

The Hamptons, a 54-mile chain of towns along Long Island’s eastern shore, is also synonymous with New York glitz and glamour.

Part-time residents include celebrities like Jay-Z and Beyonce, Jennifer Lopez, and Sarah Jessica Parker and Matthew Broderick. But as the year-round population has swelled, roads are choked and beaches packed.

For those looking for alternatives to the perennially hot Hamptons, with with far less aggressive prices, there are plenty of other waterside towns around the US that offer inspiring scenery, expansive homes, and similar upscale amenities.You might not spot Jerry Seinfeld or Maggie Gyllenhaal at the next table, but locals in these five low-key seaside spots prefer it that way.

More: Rising Rents and Population Shifts Sustain the Edge for Sellers in US Cities

Officially incorporated in 1916, this seaside northern California town of 3,800 has long been sought-after for its white-sand beaches, eclectic shops and restaurants, and historic architecture.

“It’s a lovely, small community with an incredible landscape and scenery,” said Tim Allen, owner of Tim Allen Properties in Carmel-by-the-Sea and a lifelong resident. “It’s also incredibly clean, with a lot of resident participation in maintaining its natural beauty.”

Balcony view from a five-bedroom, oceanfront estate in Carmel-by-the-Sea. The property is currently listed for $18.9 million.

Prices across Carmel-by-the-Sea range from $2 million to $25 million, Mr. Allen said, with Carmel’s “Golden Rectangle” neighborhood in highest demand for its walkability to town and the beach. A four-bedroom, three-bathroom house there recently sold for “just under $6 million,” he said. In hilly Carmel Woods, just north of town, “prices are about 30% less, from $2 million to $4 million,” he said. In April 2021, Realtor.com reported the median home sold price here was $2.37 million; this April, that figure jumped to $3.3 million.

When Tony Mariotti was growing up in Vancouver, Washington, nearby Lake Oswego was considered “like Beverly Hills,” he said. “The lake made it unique, and it was the place to live.”

Lake Oswego, 8 miles south of Portland, has kept its cachet. An 8,170-square-foot lakefront recently sold for $7 million, said Mr. Mariotti, owner of the Great Vancouver Homes real estate agency. “But it’s a great value, at about $1,100 per square foot.” 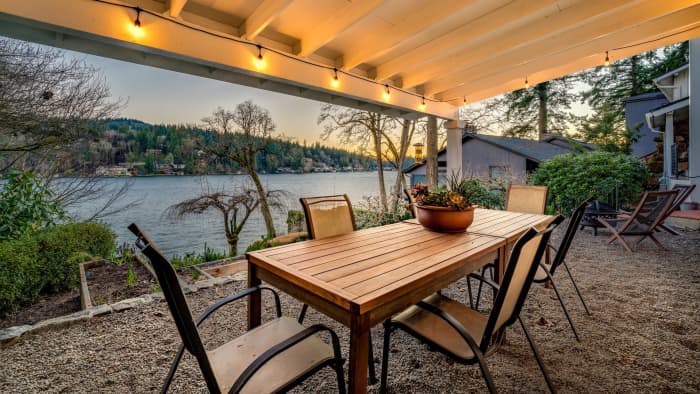 View from a lakefront home in Lake Oswego, Oregon.

Along with the 405-acre lake—most of whose frontage is private—the attraction here is “great schools, a quaint waterfront downtown with independent boutiques and restaurants, and eclectic architecture, with Pacific-Northwest modern, traditional Tudor, and mid-century modern,” he said. And while the market remains hot, “we’re no longer seeing as many multiple bidders pushing up prices,” Mr. Mariotti said. “The bid-to-ask ratio is getting closer. We’re achieving more of a balance.”

More: For Luxury Buyers in California’s Bay Area, the Moment to Negotiate May Have Finally Arrived

A “boutique community” between Seattle and Bellevue, 5-mile-long Mercer Island is “a lifestyle unto itself,” said Michele Schuler, a realtor at Realogics Sotheby’s International Realty. “It’s extremely high end. But everyone’s very approachable and down-to-earth, and everyone wears jeans. You don’t know who you’re standing next to in terms of wealth.”

The waters of Lake Washington are “a huge attraction. We’ve got two beach clubs and three public beaches. My kids are always out waterskiing, paddleboarding and jet skiing.” 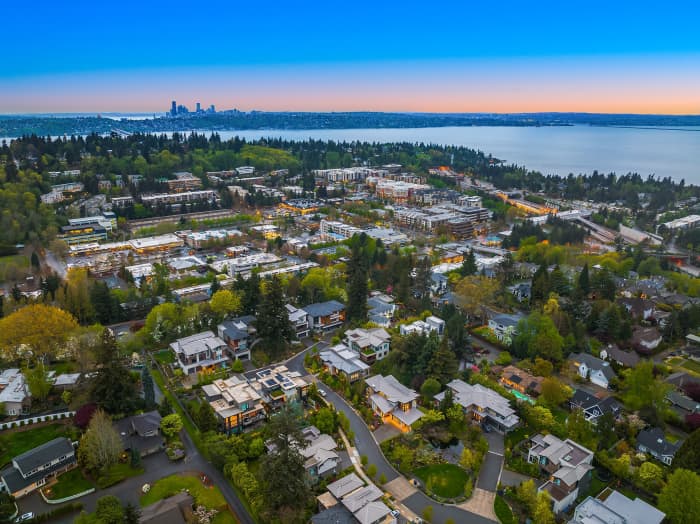 With “tremendous restrictions” on new construction since 2017, including limits on home sizes, houses here are even more in demand. Listings stay on the market for an average of five days here, Ms. Schuler said, with a median home price around $2.4 million, and a top-end listing at $16.5 million. “We did see a bit of a shift in May, since so many of our buyers depend on tech-stock prices,” she said. “Now, it’s more about pricing homes appropriately.”

The neighborhoods of the island’s North End, including Mercerdale, First Hill and Madrona Crest, are adjacent to the island’s town center and most coveted for their “convenience factor,” she said. The more remote South End’s proximity to schools “has drawn families, especially through Covid,” Ms. Schuler said. Top neighborhoods include The Lakes, Mercer Island Estates and Tarywood Park.

More: There’s a Window of Opportunity for Buyers of Manhattan Pied-à-Terres to Find a Deal

With its seaside position about 65 miles south of New York City, Sea Girt attracted a wide range of buyers during the pandemic, said Denise Dreyer, a realtor at Ward Wight Sotheby’s International Realty. “We had buyers from all over as people changed how they live,” she said. “That started driving prices up at least 20% or 30%. And we don’t have a lot of inventory, so people were bidding 20% ​​or more over asking, and houses were flying off the market.”

A “low-key and laid-back” community is part of the attraction, she said. “It’s a fabulous lifestyle, and we get a lot of people who come here as an alternative to the Hamptons.” Along with a popular boardwalk and public beaches, “there’s a lot of biking, boating and golf,” with the Spring Lake Country Club and the Manasquan River Golf Club nearby. “But there’s a long waitlist to get into those places,” she said. 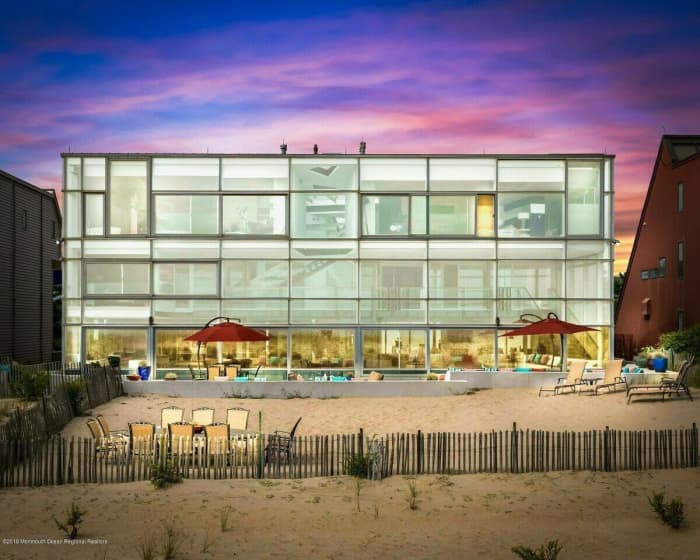 This seven-bedroom, double lot beachfront home in Sea Girt, New Jersey is on the market for $10.75 million.

With a median home listing price of $2.14 million, according to Realtor.com, Sea Girt is home to the second-most expensive ZIP code in New Jersey. “It’s the land value, the soil, that [is] very expensive,” Ms. Dreyer said. “We have 13 houses on market right now from $1 million to $12.9 million, and the $12.9 million oceanfront is a teardown.”

A “very small” town center includes “two restaurants, a breakfast place, a liquor store and lots of real estate offices,” she said. The town of Spring Lake, 2 miles north, “has more of a downtown.”

“You kind of fall in love with Block Island—you either get it or you don’t,” said Rosemary Tobin, sales associate at the Lila Delman Compass real estate agency and a 24-year resident.

Three things have kept Block Island special, she noted. “First, it’s zoning. We saw what was happening with density in Nantucket, Martha’s Vineyard and the Hamptons, so it’s very strict.” second is conservancy; “Every buyer pays 3% to the Block Island Land Trust, and 47% of the island is conserved open space,” Ms. Tobin said. Third is historic preservation. “Everything in town is a historic district. It leaves out franchises, and signs have to be done in wood,” she added.

About 7% of the Block Island is conserved open space, according to local real estate specialist.

That unique character has helped propel home prices to an average $1.5 million, “and more like $2 million to $3 million on the water,” Ms. Tobin said. Buyers from New York and Connecticut power the market, “along with a lot of Vermont people. We haven’t had the crypto billionaires. We have really bad internet. But people really like that.” Broadband is coming, she added.

About 53 miles south of Providence and 102 miles south of Boston, Block Island has seen a familiar pandemic pattern of “low inventory and rising prices,” Ms. Tobin said. “Normally, we do 30-35 transactions a year. In the last year, we’ve done over 70. A lot of people discovered Block Island during Covid. They realized, ‘I could be dead—why should I not get my dream house?’”