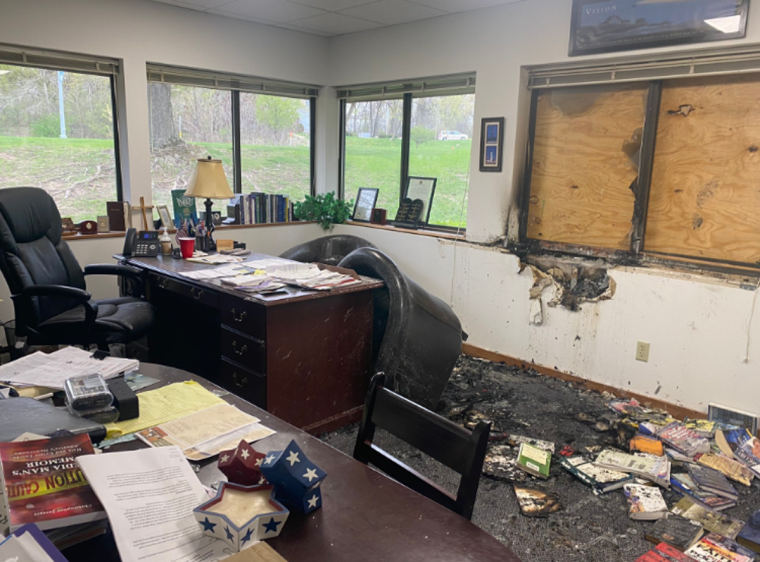 Debris is scattered across the office of the Wisconsin Family Action headquarters, which was attacked with two Molotov cocktails and graffiti following the leaking of a draft opinion of a US Supreme Court case that could overturn Roe v. Calf. | Twitter/AlexanderShur

The FBI is investigating the recent attacks and vandalism of pro-life pregnancy centers and churches as potential acts of domestic violence or extremism ahead of a US Supreme Court ruling that could overturn the Roe v. Wade decision that legalized abortion nationwide.

A source familiar with the matter told The Christian Post that the FBI is looking into potential FACE Act violations in certain cases. The legislation makes it a federal crime to use force or threat of force to prevent access to reproductive health services. The bureau is also investigating violent crime matters depending on the facts of each case.

“The FBI is investigating a series of attacks and threats targeting pregnancy resource centers and faith-based organizations across the country,” an FBI spokesperson said in a statement shared with media outlets. “The FBI takes all threats seriously and we continue to work closely with our law enforcement partners and will remain vigilant to protect our communities.”

Following Politico’s report last month on a leaked draft majority opinion in the Dobbs v. Jackson Women’s Health Organization case that suggests a majority of justices are poised to overturn Roe, multiple churches and pro-life advocacy organizations have been vandalized or firebombed by abortion extremists.

The bureau opted not to comment on any specific groups carrying out the violence, but a spokesperson told The Washington Examiner that an inquiry is underway.

Earlier this month, more than 100 House Republicans sent a letter to Attorney General Merrick Garland, calling on the Department of Justice to investigate the attacks against religious organizations and pregnancy centers as acts of domestic terrorism.

“We write to express serious concerns over recent attacks targeting religious organizations and crisis pregnancy centers and request the Department of Justice respond with how its National Security Division plans to investigate these acts of domestic terrorism,” the House Republicans wrote.

The letter argued that “terrorists have targeted numerous pro-life crisis pregnancy centers — two of which culminated in the firebombing and destruction of property by the terrorist group Jane’s Revenge in Buffalo, NY, and Madison, WI.”

The group of abortion activists identifying themselves as Jane’s Revenge claimed responsibility for an attack last month on the headquarters of Wisconsin Family Action in Madison.

An incident report compiled by the Madison police department stated: “A Molotov cocktail, which did not ignite, was thrown inside the building. It also appears a separate fire was started in response. Graffiti was also found at the scene. No injuries have been reports.”

Pictures of the vandalism posted on Twitter by Alex Shur of the Wisconsin State Journal depicted the phrase “If abortions aren’t safe then you aren’t either” painted on an exterior wall of the building and an office damaged by fire with books scattered across the floor.

The abortion activists also allegedly firebombed one of the offices belonging to CompassCare, a network of pregnancy centers serving women in New York. The pro-life organization announced on June 7 that its office in Buffalo was “firebombed by abortion terrorists.”

“The windows in the reception room and nurses’ office were broken and fires lit. Graffiti on the building left by arsonists refers to the abortion terrorist group Jane’s Revenge, reading ‘Jane Was Here,'” the statement reads.

Jane’s Revenge demanded in a June 14 communique that these organizations disband, threatening to take “drastic measures” for their refusal to comply.

“From here forward, any anti-choice group who closes their doors, and stops operating will no longer be a target,” the abortion activists wrote.

“But until you do, it’s open season, and we know where your operations are. The infrastructure of the enslavers will not survive. We will never stop, back down, slow down, or retreat,” they continued.

In an email obtained by the anarchist website Abolition Media, Jane’s Revenge boasted that it had smashed the windows of two Detroit-based pregnancy centers. The group also left behind the message: ‘if abortion isn’t safe, neither are you’ and ‘fake clinic.’ Jane will have her revenge.”

Another pregnancy center in Vancouver, Washington, was covered in red paint and had “Jane’s Revenge” written on the front of the building. Pictures of the vandalism at Options360 were posted on Twitter by journalist Alissa Azar on June 9.

Churches have also been vandalized since the draft leak last month.

Jane’s Revenge took credit for vandalizing four Washington State churches over the weekend of May 21-22. Abolition Media posted an email sent by the activist group describing the destruction of the churches.

“Last night we vandalized four anti-abortion churches in Olympia,” the email read. “A Mormon church, Calvary church, Harbor Church, and St. Michael’s Catholic church all received facelifts in the early hours of Sunday morning. We dumped red paint over the entryways and left messages of ‘If abortions aren’t safe then neither are you ,’ ‘Abort the church,’ and ‘God loves abortion.'”

A picture posted on the blog showed the phrase “If abortions aren’t safe then neither are you” and the anarchist symbol spray-painted on two sets of double doors at the front of The Church of Jesus Christ of Latter-Day Saints.

In another incident, Stephen Pimpo of WCBI News, a northern Mississippi-based CBS affiliate, reported on May 24 that Lowndes County Sheriff’s Department was investigating the vandalism of Mt. Avery Missionary Baptist Church. Photos of the damage depicted the message “girls just want to have fundamental rights” spray-painted on the doors of the church.

Other photos showed the phrase “Keep Your Laws Off My Body” spray-painted in multiple locations on the church’s exterior walls.

In May 2021, a report declassified by the US Department of Homeland Security named pro-life and abortion activists on its list of potential domestic violent extremists.

The report stated that “domestic violent extremists (DVEs) who are motivated by a range of ideologies and galvanized by recent political and societal events in the United States pose an elevated threat to the homeland in 2021.”

The document maintained that “mere advocacy of political or social positions, political activism” and “use of strong rhetoric may not constitute violent extremism, and may be constitutionally protected.”