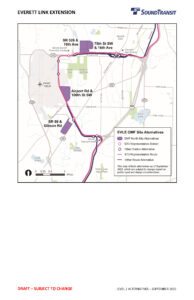 Potential locations for the operations and maintenance base.

“Light Rail does not exist just to get people to Seattle,” Everett Mayor Cassie Franklin said Wednesday. “I want people in King County to use light rail to come to their jobs in the Southwest Industrial Center in Everett.”

Mayor Franklin was speaking during a meeting of the Elected Leadership Group for the Everett Link Extension. According to Sound Transit the EVLE project’s Elected Leadership Group (ELG) is a group of elected officials that represent the project corridor and the Sound Transit Board. The purpose of this group is to represent local perspectives in the planning process, strive for consensus around key decisions and work through project issues as necessary.

Here’s more detail from Sound Transit on the purpose of the Elected Leadership Group:

Mayor Franklin went on to explain his position that when people think of Everett, they think of north Everett and downtown but south Everett is the largest part of the city. It’s the most diverse, presents the greatest opportunity for transit oriented development but is also a part of Everett, Washington that has lacked investment for years.

Also speaking up at the ELG meeting yesterday was Snohomish County Executive Dave Somers who has served on the Sound Transit Board for 7 years. “Representative alignment is what the voters chose,” said Somers. “Southwest Everett is the largest manufacturing center in the State with 40,000 jobs, we need to stop wasting energy on things being pushed on us from outside.”

Here’s a recap of yesterday’s meeting from Sound Transit and some links to the latest on the Everett Link Extension.

In June, we announced two new route alignments to be studied, one along I-5 and one along SR 99/Evergreen Way, as a response to public comments and Board direction to explore cost savings during the realignment process.

The ELG noted the concerns raised by the Community Advisory Group, community organizations and members of the public, specifically around equity issues, gentrification and displacement. They stated their commitment to bring light rail and associated benefits to current residents and businesses while working to address issues like housing affordability and potential changes to community culture and character.

We will continue evaluating the alternatives recommended for further study by the ELG in April.

Results of this evaluation will be shared with the ELG, the Community Advisory Group and the public this winter and will not include I-5 or SR 99/Evergreen Way alignments. The public will be invited to provide comments during a public scoping comment period at that time.