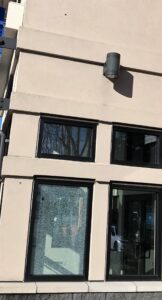 Everett Police are investigating after at least two businesses in the area of ​​26th and Colby in downtown Everett, Washington were struck by bullets Monday night.

Sno911 received several reports of multiple shots fired in the area of ​​26th and Colby shortly after 11:00 PM.

There was damage to a window and wall at Banner Bank and a window was shot out at the Abbey Capet Store at 2601 Colby.

There were no reports of injuries. Everett Police have a tip line for those who may have information.