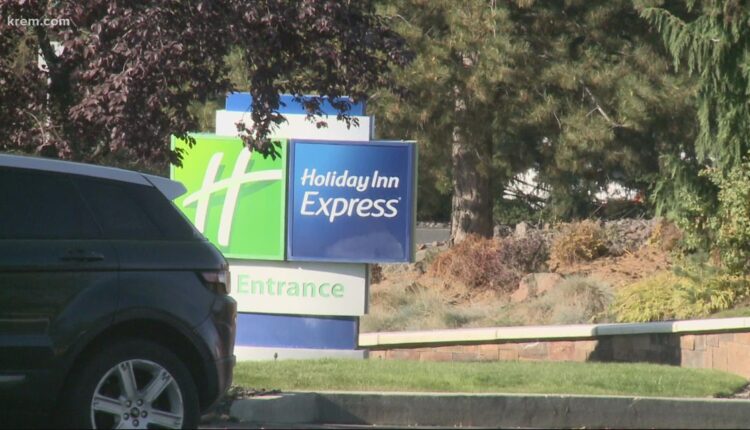 The Holiday Inn Express on Division and North River has seen a surge in the number of homeless people disrupting their guests and employees.

A local Holiday Inn Express has been looking for solutions to the constant trespassing of the homeless, which causes hotel guests and staff to feel insecure.

Overlooking the corner of Division and North River, the hotel has been in Spokane since 1992 but has only recently had overwhelming trespassing issues. The hotel’s general manager, Julie Cohen, says she had to kick non-guests out of the hotel for trying to take out food and use their facilities.

“I’ve been working cemetery shifts where people would come in and intimidate our guests into coming through the door,” Cohen said. “The confrontation that usually happens when we ask them to leave is difficult.”

She feels sorry for the situation the intruders find themselves in; however, it causes discomfort among hotel guests and staff. They deal with break-ins, loitering, fires, storage and drug use in hotel bathrooms.

The most disruptive event in recent history was November 2020 when a homeless camp in a cave below the hotel set fire to the building’s natural gas pipeline. Owner Kent Clausen said they had to evacuate part of the hotel while flames shot into the pavement.

Clausen owns various hotels in several states. This place is the worst for trespassing.

“We don’t have any problems anywhere near here like here. It’s really no comparison, ”said Clausen.

It’s a problem that many local businesses and hotels in downtown Spokane face. Cohen is also the President of Spokane’s Hotel and Motel Association.

At the height of the pandemic, she spoke to Spokane City Council and Mayor Nadine Woodward via Zoom about the issues. Since that conversation, staff shortages and business growth have prevented them from pursuing longer-term solutions.

Holiday Inn Express staff will call the police when these issues arise, but there is little the police can do unless there is an actual crime.

Spokane PD Corporal Nick Briggs said that if a company made it clear to the perpetrator that trespassing was undesirable on their property, it gave the police more legal reasons to stand on it. He suggests hanging up signs verbally telling the perpetrators to leave the property.

This is not just an issue for Holiday Inn Express. Corporal Briggs said he had heard from several downtown businesses that there had been more trespassing by the homeless.