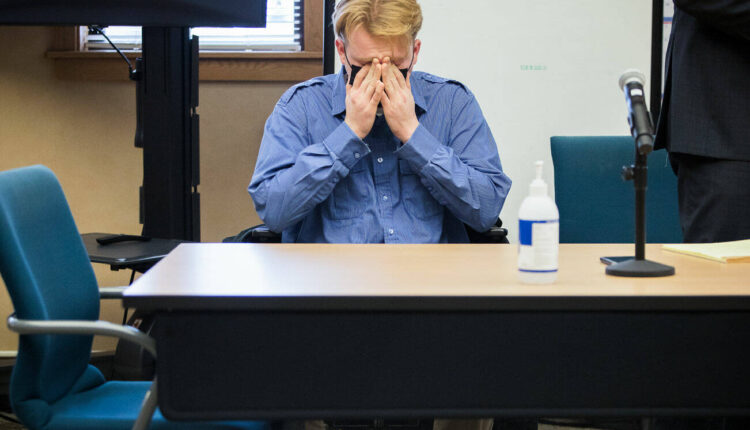 EVERETT – A jury found a Lake Stevens man guilty of first degree manslaughter, but not of murder, for killing a stranger on a bus in Everett.

Alejandro Meza, 22, wept when the verdict was read in the Snohomish District High Court on Wednesday afternoon. He was on trial for second degree murder but was acquitted of those charges.

Meza got into an argument with his passenger, Gene Peterson, on a community transit bus. According to the defendant’s testimony during the trial, the argument began because Meza confronted Peterson on March 7th for smoking.

His defense attorney Timothy Leary argued that Meza acted in self-defense. On the stand, Meza said, “I thought I was going to die.” He choked as he described the shooting.

Prosecutors argued that Meza had no reasonable fear of danger.

“Mr. Peterson did not have to die that night,” said assistant prosecutor Adam Sturdivant in his final statement to the jury.

Peterson’s mother was in the courtroom when the verdict was pronounced Wednesday.

Peterson and a friend got on the bus that March night when Meza was on her way to work in Mukilteo. Meza couldn’t drive because he was having seizures.

According to witness statements, Peterson tried to smoke drugs.

Meza told him to stop because he thought it might cause a seizure. He testified that this conversation “did not go as planned”. He also alleged that Peterson threatened to have him “euthanized”. Peterson did not threaten the use of a gun, Meza said in a police interview after the shooting.

Peterson slapped him in the face, a surveillance video showed. This footage was shown to the jury several times throughout the trial.

A fight broke out in the corridor.

In a matter of seconds, Meza pulled the bolt on his pistol and fired a shot into Peterson’s stomach. He told the police that the first shot was an accident.

The first 9mm bullet brought Peterson to his knees, his back to Meza. The defendant fired another shot in Peterson’s back and through his right lung and liver. That bullet was intentional, Meza reportedly told police.

After the shooting, Meza was seen on a security video pulling the magazine out of his gun and raising his hands in the air.

Meza said he feared for his life all along. Prosecutors argued that Meza had no reason to be afraid after the first shot, but he fired a second anyway.

Sturdivant called it a “senseless killing”.

“It’s that simple, ladies and gentlemen: Mr. Meza brought a weapon to a fistfight,” he told the jury and later added: “Nobody claims that Mr. Meza is a cold-blooded murderer … What we are saying is his decision, killing a man is unreasonable. ”

Defense attorney Leary argued, “He doesn’t have to wait for Peterson to successfully escalate the situation further. He is entitled to act on appearances provided he acts in good faith and for just cause. ”

The jury found that Meza committed the crime armed with a firearm. The sentence increase will be added to Meza’s prison term for a mandatory five years, Sturdivant said.

Meza had no previous convictions.

Okrent ordered Meza to be held in prison on $ 100,000 bail. The sentencing is scheduled for December 2nd.