Breaking down the deadly tornado in Vancouver, WA, 50 years later

PORTLAND, Ore. (KOIN) – KOIN 6 Meteorologist Steve Pierce wasn’t born yet when a massive tornado swept through Vancouver, Washington on April 5, 1972. But, he was born and raised blocks from some of the worst damage and he has made studying the storm a priority of his professional career.

Now, as KOIN 6 News and KOIN.com mark the 50th anniversary of the deadliest tornado to ever hit west of the Rocky Mountains, Pierce gives us a detailed description of how the tornado came to be and what it did while it was on the ground :

The difference with this one though was that the air mass behind the front was much more unstable than normal. We had low-level, southerly winds blowing up the Willamette Valley but up above, we had strong westerly winds. That’s where you can create wind shear.

So about 11:00 that morning, a strong line of showers moved from the coast up over the coast range and was approaching the Willamette Valley. By noon, it was making its way into the Western half of the Portland Metro area. That led to warm air at the surface pulling cold air down from above and turning the system into a line of thunderstorms from Southern Washington down through about Corvallis.

From about 12:30 to 12:45, the line intensified as it moved from west to east across the Portland metro. Keep in mind that’s the upper level flow. The low level flow, closer to the surface, is flowing south to the north. That turned the convective roles from horizontal to vertical. There’s the beginning of wind shear and the formation of what became the tornado.

Tornado, with two distinct funnels, over Vancouver, WA as likely seen from the south side
of the Columbia River on April 5, 1972. (KOIN Archives)

The first reports were in the Tigard and Tualatin areas of a strong thunderstorm with high wind, perhaps 50, 60 miles per hour. But, nobody could foresee the forming of an actual tornado over Northeast Portland.

The first reported touchdown, the actual tornado, was on the Oregon side of the river near Marine Drive and NE 33rd, just west of the Portland International Airport.

It’s interesting to note that’s only about 20 blocks west of the airport’s weather service office at the time. The peak wind at the airport was just a little over 60 miles an hour, but there were reports at the marina where boats were damaged, of winds anywhere between 85 and 120 miles an hour.

Tornado as it moves northeast through Vancouver, WA on April 5, 1972. (KOIN Archives)

Witnesses in the McLoughlin Heights neighborhood of Vancouver reported seeing a water spout, which was the tornado touching down in the Columbia river and picking up water. The next report of the tornado on the ground touchdown was on the Washington side of the river off of Highway 14, near Marine Park.

It then lifted up over the McLoughlin Heights neighborhood, which is about 200 feet of elevation above the river. It touched down in what was then referred to as the Northcrest neighborhood near Devine Road and Mill Plain Boulevard, specifically Kansas Street, Montana Lane and, Missoula Avenue.

It destroyed multiple homes in that area, then lifted back up as it went down the other side of the McLoughlin Heights in the area just east of 18th Street and Andresen; the president day location of Fort Vancouver High School and very close to the former location of Peter S. Ogden Elementary School where the walls collapsed.

She was in 9th grade in 1972. The tornado still affects her.

A large number of the students of Fort Vancouver High School actually came running across the field to the demolished elementary school there to assist with triage. A lot of children were injured, but there were no fatalities at the school. 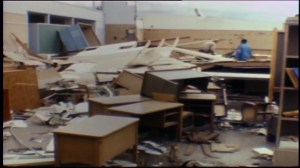 The tornado continues in a northeasterly direction on the ground and ends up hitting the bowling alley, which is no longer there. A young woman was killed.

It continues across 4th Plain and Andresen on the ground and then strikes what was the Waremart near SR 500 and Andresen. The ceiling collapsed there. The roof actually lifted up and then collapsed.

Pacific Northwest is no stranger to deadly natural disasters

This is a large warehouse type shopping center and it killed another five people there. It twisted cars up. It spun cars around in the parking lot. Eerily similar to something you would see in the Midwest. That was probably the height of the storm right there, from McLoughlin Heights down over the hill, through Fort Vancouver High School, Peter S. Ogden Elementary, 4th Plain and Andresen.

It lifts up and only touches down a few more times in spotty areas in basically a slightly Northeast line. There are reports all the way out to Battleground and Brush Prairie. 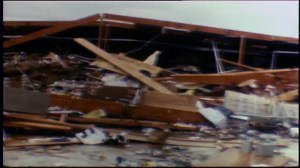 A severely damaged commercial building, likely the Waremart store where 5 people died in a tornado on April 5, 1972. (KOIN Archives)

After it passed through, it was typical spring day, temperatures in the 60s, not abnormally warm or abnormally cold.

The key here is that this is still the deadliest to this day, west of the Rocky Mountains. Not the strongest, but the deadliest. An F3 with winds in excess of 175-200 miles an hour in the Northwest is extremely rare.

Now, could that happen again?

No reason why it couldn’t.